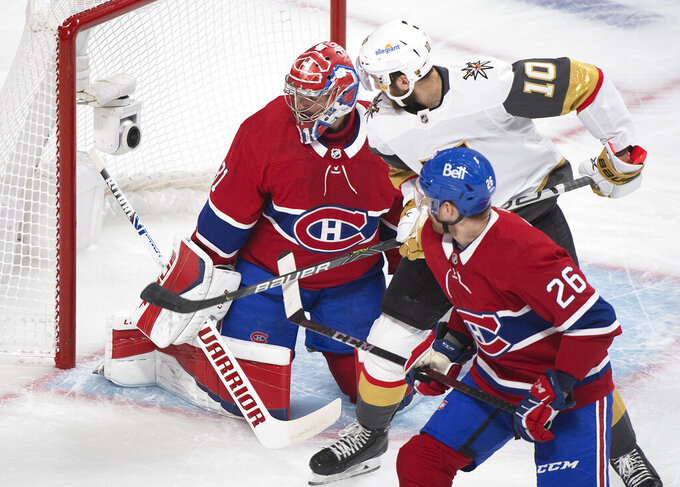 MONTREAL (AP) — Vegas goalie Robin Lehner took a rather unconventional method in getting fired up upon being informed he was getting the start in Game 4 of the Stanley Cup semifinal series against the Montreal Canadiens.

Lehner rode the team bus alone to the arena four hours before game time and spent much of his time reading his doubters question him on social media.

Lehner stopped 27 shots starting in place of Marc-Andre Fleury, Quebec native Nicolas Roy scored 1:18 into overtime with much of his family present, and the Golden Knights rallied to a 2-1 win Sunday night to even the series at 2-all.

Game 5 is Tuesday night at Vegas.

“I sat for two hours and watch you guys talk (trash) on Twitter on me to get me motivated,” Lehner said. He was referring to the media raising doubts following his only other postseason start in which he allowed seven goals on 37 shots in a second-round series-opening 7-1 loss to Colorado on May 30.

“People act like that I’m not very good, especially in our town,” he added. “It was very enjoyable on Twitter today. Thank you very much for giving me that motivation.”

Coach Peter DeBoer had no doubt Lehner would respond, and added his decision to switch goalies had nothing to do with Fleury’s late-game flub on Friday, which led to Josh Anderson scoring the tying goal with 1:55 in Montreal’s 3-2 overtime win. DeBoer was more concerned about fatigue, with Fleury having started 15 of Vegas’ first 16 playoff games.

Brayden McNabb also scored for Vegas, and the Golden Knights turned the tables in Game 4 by rallying from a one-goal deficit two days after blowing two one-goal leads Friday.

Paul Byron scored on a breakaway with 1:05 left in the second period, and Carey Price stopped 19 shots. Montreal dropped to 9-2 when scoring first this postseason and lost its first OT decision after winning its first four.

It’s now on the Canadiens to respond following a loss in which they outplayed the Golden Knights for much of the first two periods, but were unable to convert several scoring opportunities.

“I feel bad for the players. They put a lot of effort in, really played the right way, played real hard,” Montreal assistant coach Luke Richardson said, standing in for interim coach Dominique Ducharme, who is in quarantine after testing positive for COVID-19. “We had a few chances to maybe make it 2-0 or 2-1 and we just couldn’t capitalize.”

Former Canadiens captain Max Pacioretty — the target of a booing Montreal crowd — played a key role in setting up Roy’s goal. Pacioretty got a shot off by spinning around in the left circle, only to be stopped by Price.

The rebound went directly to Roy in front. Price kicked out his left pad to stop Roy’s initial attempt, but was unable to control the rebound and made a lunging attempt as Roy lifted the shot over the goalie.

Vegas forward Alex Tuch thought it fitting in how Lehner and Pacioretty factored in the victory.

“It doesn’t matter what the outside noise is, we just lean on each other. Our confidence comes from within the room,” Tuch said. “Personally, I look up to both those guys and lean on them for a lot of wisdom. They showed up big for us tonight and that’s what we need and that’s what we’re gonna get out of them I know for sure going forward.”

McNabb tied the game by converting William Karlsson’s pass from behind the Montreal net with 9:23 left in regulation. Karlsson spun away from a defender in the left corner and broke behind the net to feed McNabb, who was pinching in from the right point. McNabb snapped a shot that just beat Price under the left arm.

The goal came some three minutes after Lehner stood his ground to deny Cole Caufield driving the net on a breakaway. Lehner was particularly sharp in an opening period in which the Canadiens outshot Montreal 11-4 and 28-19 overall.

His best save came 12:30 in, when he kicked out his left leg to get a toe on stopping Joel Armia’s redirection of Corey Perry’s pass on a 2-on-1 break.

The Canadiens’ smothering and opportunistic style frustrated Vegas through two periods, and paid off with Byron scoring on a breakaway with 1:05 left in the second period. He was set up by Nick Suzuki, who had just finished serving a hooking penalty.

In killing off Vegas’ lone opportunity, the Canadiens set a playoff record by not allowing a power-play goal in 11 consecutive games, breaking a mark held by three teams and most recently the New Jersey Devils in 2000. Montreal has killed off 26 consecutive power-play chances, and allowed just three goals 42 opportunities all postseason.

The Golden Knights entered the game with the postseason’s least productive power play, and have gone 0 of 13 in their past six, and converted just four of 39 opportunities.

The Golden Knights GM Kelly McCrimmon was placed in self-isolation after testing positive for COVID-19 earlier in the day. On Friday, TV cameras showed the 60-year-old McCrimmon not wearing a mask while watching Game 3 from a suite alongside team president George McPhee.

Ducharme has remained in daily touch with his players and staff by video call and texts. Growing up a Canadiens fan in Quebec, he joked having not watched a Montreal game on TV since before being hired as an assistant in 2018.

Said defenseman Ben Chiarot: “You can only imagine how he feels sitting at home watching us right now at this point of the season. We feel for him and we’re going to work to get the win for him.”

Among the 3,500 fans in attendance were several former Canadiens greats, including Guy Carbonneau, Patrice Brisebois, Rejean Houle and the wife and daughter of late captain Jean Beliveau.