Russians unhappy despite 2-0 start in hockey at Olympics 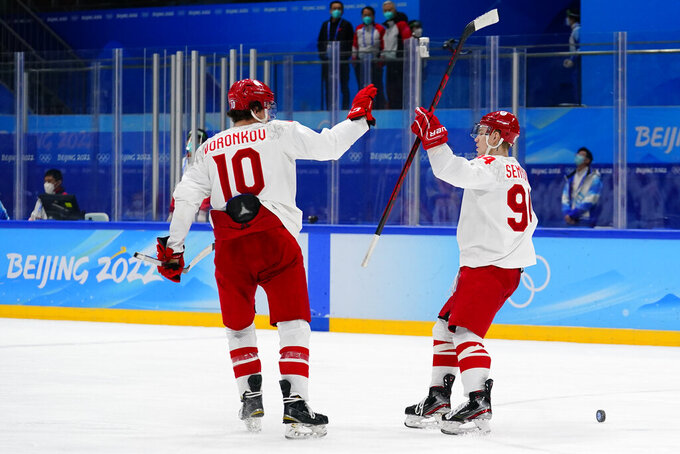 BEIJING (AP) — Just because the Russians won their first two games at the Olympics with a couple of shutouts doesn't mean they're happy about it.

The defending champions and gold medal favorites in the men’s hockey tournament have scored just twice against an opposing goaltender. Their 2-0 victory Friday against overmatched Denmark featured an empty-netter and a concerning lack of offense from a team that should have no trouble scoring.

“We won two games, but I am not happy how we play offensively,” coach Alexei Zhamnov said. “We’re not controlling the puck, we don’t have traffic in front of the net and too much play around. That’s why maybe we don’t score so many goals. Next games is going to be tougher because teams are going to be better and better, so we have to be ready for this.”

The Russians wrap up the preliminary round Sunday against the Czech Republic and will be one of the top seeds in the knockout round if they win that game in regulation. The Czechs are certainly a step up in difficulty level from Switzerland, which the Russians beat 1-0 Wednesday, and Denmark, so the faster the goals materialize the better.

Forward Stan Galiev said he and his teammates need to manage the puck better and make it more difficult on opposing goaltenders to generate more quality scoring chances.

“We have to score more,” Galiev said. “We try to do a couple cute passes, extra passes. We’ve got to shoot more and get the pucks on net.”

The Russians — competing as ROC, short for Russian Olympic Committee, because of a massive state-sponsored doping operation dating back to the 2014 Sochi Games — are averaging more than 30 shots a game. Forward Mikhail Grigorenko said the power play, which is 0 for 8 so far, needs to get going, while his coach wants to see better effort.

Beating Denmark was a matter of talent disparity. Denmark captain Peter Regin said: “Russia is a better team than us. That is just facts.”

Such slow starts are common for Russian teams in international tournaments, and Regin is bullish on their chances of making another deep run to a medal.

“I think they’re the favorites to win,” he said. “I think they have the best team on paper. All of them play in KHL, top guys that could play in the NHL if they wanted, and a phenomenal goaltender. I think they have all the ingredients to go all the way.”

That phenomenal goaltender is Ivan Fedotov, who has not been tested much but has stopped all 49 of the shots he has faced. The Philadelphia Flyers 2015 seventh-round pick has been the Russians' best player so far.

In other games Friday, Sweden defeated Slovakia 4-1, while the Czechs remain without a regulation victory after beating Switzerland 2-1 in a shootout. Finland plays Latvia in the nightcap.

The U.S. and Canada renew their rivalry Saturday. Each team won its opener: The Americans 8-0 against China and Canadians 5-1 against Germany.