Russians win in women's hockey after quarantine at Olympics 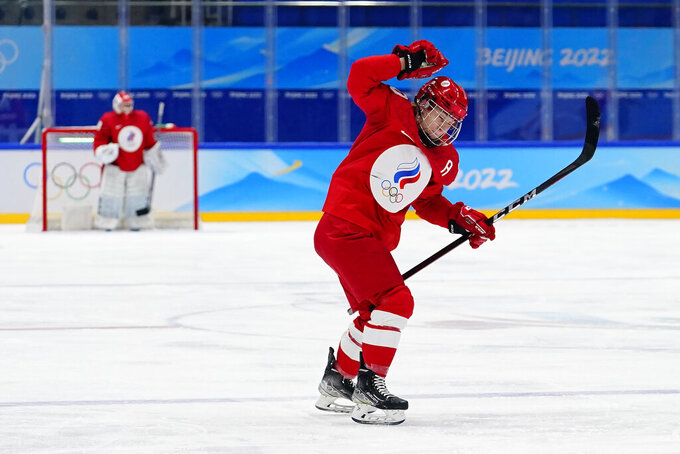 Russian Olympic Committee's Anna Shibanova (70) celebrates after scoring a goal against Switzerland during a preliminary round women's hockey game at the 2022 Winter Olympics, Friday, Feb. 4, 2022, in Beijing. (AP Photo/Matt Slocum)

BEIJING (AP) — The Russian women's hockey team has gone from quarantine to an Olympic win in two days.

The Russians were in isolation in the Olympic Village from Monday to Wednesday and couldn’t train after one of the largest coronavirus outbreaks so far at the Beijing Games. It wasn't an ideal situation ahead of its opening group game against Switzerland, but they still won 5-2.

“We came to the Olympics and we had to sit in our rooms without the opportunity to practice,” said Russian forward Alexandra Vafina, who had two assists. “It was hard but we got all together, we stayed positive and we took this little opportunity that we had."

The United States and Canada each lost key players because of injury, but the Russians are worse hit with six of their original 23-player roster from last month now unavailable after virus positives, including captain Olga Sosina. Vafina said the team sent fun, supportive messages on a group chat to keep spirits up and ensure the replacement players who arrived later feel welcome.

Russia's name and flag are banned from the Olympics in the fallout from years of doping disputes, so the team is playing as ROC, short for Russian Olympic Committee. The ROC team only had 18 skaters and two goaltenders available for the game, while Switzerland had its full allowance of 23 players.

Switzerland had its own ordeal to overcome after collapsing in a 12-1 loss to Canada in its opening game, its biggest loss in Olympic play. The 2014 bronze medalists were aiming to build on a surprise 3-2 overtime win over the Russians in the quarterfinals of last year's world championships and stayed with goalie Andrea Braendli after she faced 70 shots against Canada.

Twice the Russians took the lead but Switzerland tied it up both times before Anna Shibanova's go-ahead goal in the second period. Polina Bolgareva had scored in the first period and added two more in the third.

China had one of the first women's teams to play Olympic hockey when the event was added in 1998 but declined following its third Olympic appearance in 2010 and hadn't qualified since. It lost its opening game to the Czech Republic 3-1 on Thursday.

China is playing in Beijing with a team strengthened by experience of playing on a Chinese-run club in the Russian league and including naturalized players. Canada-born Leah Lum, playing in Beijing as Lin Qiqi, scored two goals and assisted California-born Rachel Llanes for another.

The United States will be without Brianna Decker for the rest of the Olympics after the forward injured her left leg in the tournament opener against Finland. Decker screamed in pain after being tripped from behind and was stretchered off the ice.

While the Americans know they will be without Decker the rest of the way, the other women’s hockey powerhouse faces injury uncertainty. Canada forward Melodie Daoust was injured when she was checked hard into the boards during the 12-1 rout of Switzerland. Hockey Canada has said only that Daoust was resting and being evaluated by medical personnel.