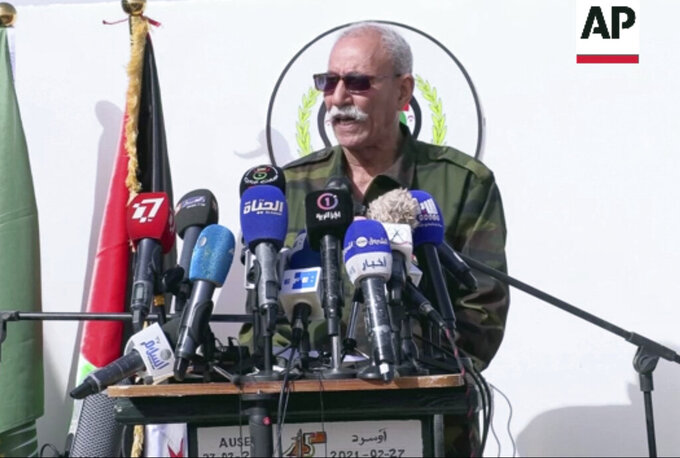 In this image made from video, Brahim Ghali, leader of the pro-independence Polisario Front speaks to a crowd in Tindouf, Algeria, Feb. 27, 2021. The leader of the Polisario Front that leads the struggle for the self-declared Western Sahara republic has been brought to Spain to receive medical treatment, it was announced Thursday, April 22. Brahim Ghali, who is 73, leads the Algeria-backed pro-independence group representing the local Sahrawi population that has fought Moroccan forces for control of the territory in western Africa. Ghali was taken to Spain “for strictly humanitarian reasons," the foreign ministry said. (AP Photo)

MADRID (AP) — The man leading the Polisario Front in its fight for independence of Western Sahara is hospitalized in Spain for treatment of COVID-19, officials from Spain and the group said Thursday.

Brahim Ghali, 73, heads the Algeria-backed pro-independence movement representing the local Sahrawi population that has periodically fought Moroccan forces for control of the territory in western Africa.

The Sahrawi Arab Democratic Republic, the self-declared government also led by Ghali, announced in a statement on social media that he was "recovering favorably" after having contracted the disease that can be caused by the coronavirus.

The statement didn't say where Ghali was being treated. But an official from Spain’s Ministry of Foreign Affairs said Ghali had been taken to Spain “for strictly humanitarian reasons.” The official, who wasn’t authorized to be quoted by name in media reports, said that no more details could be provided.

“Ghali has been treated for a few days, with his health controlled, due to his infections for the COVID-19 virus,” the Sahrawi republic's statement said. It added that his health “is not a reason for worry.”

African media had reported earlier in the day that Ghali was receiving treatment in a Spanish northern city under a false Algerian identity, which allegedly was used to avoid reactivating an old arrest warrant.

Spain’s National Court investigated Ghali in 2008 and then again in 2016 for possible genocide and other crimes as a result of allegations brought against him by a dissident Sahrawi group. But that probe was closed and Spain has no pending cases against Ghali, a police spokesman who was not authorized to be quoted by name told The Associated Press.

In one of Ghali’s last public appearances, at the end of February, he visited a refugee camp in the southwest of Algeria that is home to Polisario fighters and Sahrawis to mark the 45th anniversary of the declaration of the Sahrawi republic.

In a speech, Ghali called on the new U.S. administration of Joe Biden to find an “urgent democratic solution to the Moroccan-Saharan conflict” to allow people from the Western Sahara “to enjoy their inalienable right of freedom and independence.”

Former U.S. President Donald Trump's administration announced last year that it would open a consulate in Western Sahara following the decision to recognize Morocco’s sovereignty over the region.

The disputed territory was central to a deal announced by Trump before leaving office to establish diplomatic ties between Morocco and Israel.

The region stretches along Africa’s Atlantic coast south of the Moroccan resort city of Agadir, and borders Algeria and Mauritania. Roughly the size of Colorado, it has a population of about 600,000 people, according to the United Nations. The area was colonized by Spain in the 19th century, and was annexed by Morocco in 1975.

Some countries recognize Western Sahara as independent, some support Morocco’s claims on the land, and others back a long-running U.N. effort to seek a negotiated solution.

The territory is home to one of the U.N.’s longest-running peacekeeping forces, in place since 1991 to monitor a cease-fire and help prepare for a referendum on the territory’s future — which has never taken place.

Morocco has proposed wide-ranging autonomy for Western Sahara, but the Polisario Front says the local population has the right to a referendum.

Fighting occasionally flares up, most recently in November last year, when the Moroccan military launched an operation in the U.N.-patrolled Guerguerat border zone to clear a road that it said was blocked by Polisario supporters.