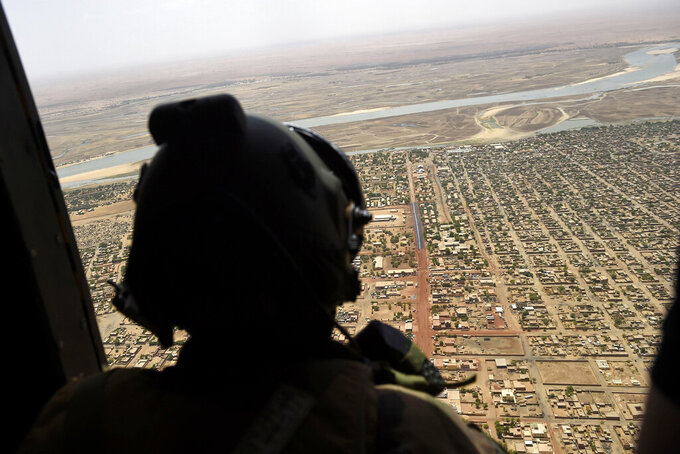 UNITED NATIONS (AP) — Mauritania’s foreign minister said Friday the five-nation African force fighting terrorism in the Sahel is facing a growing security threat sweeping the region that is not only local but a global problem that demands an international response.

Ismail Ould Cheikh Ahmed, whose country holds the presidency of the G5 Sahel force, told the U.N. Security Council the security situation “is deteriorating visibly and with rare constancy” as a result of a “diabolical alliance of terrorist and drug trafficking groups,” with violence spreading every day to new territories.

He said the Sahel is facing the shock of the COVID-19 pandemic, the lack of rainfall, terrorism, and "melting prices of our export products.”

“Certainly we all suffer on equal terms from the COVID-19 attack, but it also reveals to us the cruel inequality of our world when it comes to facing it,” the Mauritanian minister said.

Leaders of Mauritania, Burkina Faso, Chad, Mali and Niger launched the joint force in 2017 with support from the United Nations, the African Union and the European Union. France has pushed for the Security Council to authorize the G5 under Chapter 7 of the U.N. Charter, which is militarily enforceable, and finance its operation — an appeal reiterated Friday by the Mauritanian minister.

But the United States has opposed council authorization, and so far the U.N. has only been providing operational and logistical support through its peacekeeping mission in Mali.

Cheikh Ahmed said that while waiting for council action, each country at home and the five nations together have undertaken “a vigorous action” to retake land taken by terrorists and restore public services essential to people’s lives, starting with schools and hospitals.

He cautioned that “the challenge is titanic and the victories always provisional and reversible.”

But Cheikh Ahmed also cited “the brilliant victories" in the past few weeks of the Chadian army against Boko Haram in the Lake Chad area, which he said show that "terrorists can be defeated and that fear has now changed sides.”

He also highlighted an ongoing large-scale G5 operation called Sama in the area of the Mali-Burkina Faso-Niger borders, which made it possible to control the area and neutralize "the armed terrorist groups which proliferated there.”

Cheikh Ahmed said Mauritania’s G5 Sahel presidency aims to strengthen the operational capacities of the force and the interoperability of air forces — and to pursue additional contributions and long-term funding.

U.N. peacekeeping chief Jean-Pierre Lacroix told the council that providing water, rations and fuel from the U.N. force in Mali to the G5 force has been “critical,” but he said transporting these items to G5 contingents remains the biggest challenge.

Lacroix said the Mali mission, known as MINUSMA, “is operating at maximum capacity and cannot go further in support” of the G5 force with its current mandate and resources.

He said a recent assessment of MINUSMA’s assistance to the G5 concluded that international support to the five-nation force “remained crucial,” but the current operation wasn’t suited to addressing the transport and equipment shortages of the joint force.

“Strengthening the joint force is only one strand in a comprehensive international approach required to tackle the root causes of instability in Mali and the Sahel region,” he said. “Improving governance, eradicating poverty and protecting the human rights of all citizens, including the most disenfranchised, remain critical and more needs to be done to ensure that such efforts are given the same weight as military operations.”

A press statement from the Security Council “commended the G5 Sahel joint force for its increased operational tempo and encouraged the continuation of these efforts.”

Council members condemned “the continuation of terrorist attacks and inter-communal violence in the Sahel” and emphasized the importance of supporting countries in the region in their efforts to achieve peace and security and "combat terrorism.”

The council reaffirmed the importance of MINUSMA’s support to the force and “took note” of the U.N. assessment, but it made no decision on how future support will be provided and didn’t mention the financing of the G5 operation.