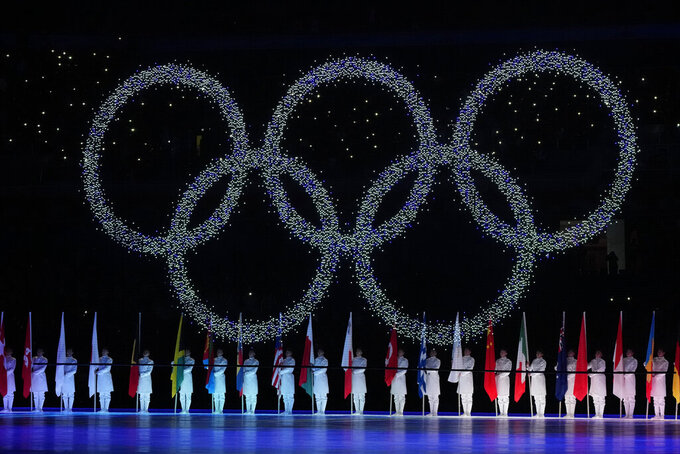 FILE - The Olympic rings during the closing ceremony of the 2022 Winter Olympics, Sunday, Feb. 20, 2022, in Beijing. Officials in the northern Japanese city of Sapporo say there is public support for holding the 2030 Winter Olympics. However, Mayor Katsuhiro Akimoto says the city has no plans to hold a binding public referendum for the final word. (AP Photo/Natacha Pisarenko, File)

TOKYO (AP) — The Japanese city of Sapporo has no plans to conduct a public referendum on holding the 2030 Winter Olympics, Mayor Katsuhiro Akimoto said Wednesday.

The northern Japanese city, which held the 1972 Winter Olympics, has expressed interest in being the host again and is believed to be the favorite.

The International Olympic Committee has not said when it will announce its choice. Other possibilities are Vancouver, Salt Lake City and a Spanish bid, perhaps from Barcelona.

“We have no such plans,” Akimoto said at a news conference, explaining the technicalities in Japan of going to a public, binding vote. “So there are no plans to hold a referendum on the Olympics and Paralympics.”

Akimoto knows the track record of referendums is not good with voters often saying “no.”

Cities no longer go through a head-to-head, public bidding process. The IOC leadership now chooses venues that it sees as favorable. Rank-and-file IOC members no longer vote on the venues, with bribery scandals having soiled recent bids.

In Europe, a string of contenders rejected holding the 2022 Winter Olympics in public votes. Beijing and Almaty, Kazakhstan, were left as the only options when the IOC made the choice in 2015.

Beijing was picked and just closed the Winter Paralympics on Sunday.

Akimoto released the results of various surveys taken earlier this month. He said the range of responses was positive, between 52% and 65%. The surveys reached out to more than 10,000. The surveys were online, by mail some in on-street interview.

Akimoto gave no details of the methodology or the reliability of the surveys.

“We feel we were able to receive a certain amount of support for the bid,” he said.

Tokyo held the 2020 Summer Olympics, which were delayed a year by the pandemic. Organizers said late last year the official cost for Tokyo was $13.6 billion, twice the initial estimate.

The pandemic helped drive up costs with taxpayers — and not the IOC — footing most of the bills.

Sapporo organizers have put the cost at $2.4 billion to $2.6 billion.

The Winter Olympics have become a difficult sell for the IOC with rising costs, concerns from environmentalists, and voter scrutiny.