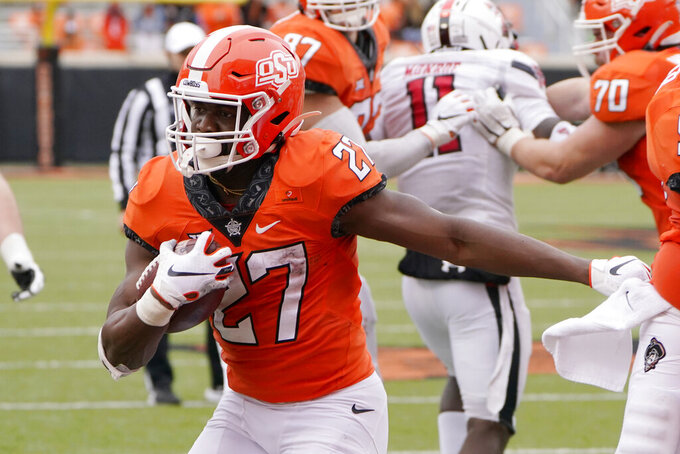 —Jaret Patterson, Buffalo, tied an FBS record with eight touchdowns and ran for 409 yards to become the fourth major-college football player to have a 400-yard rushing game in a 70-41 win over Kent State.

—Trevor Lawrence, Clemson, threw for 403 yards and two TDs in his first game in five weeks — and likely last one at Death Valley — as the No. 4 Tigers throttled Pittsburgh 52-17.

—Dezmon Jackson, Oklahoma State, rushed for career highs of 235 yards and three TDs with the No. 21 Cowboys' top two running backs out in a 50-44 win over Texas Tech.

—Mac Jones, Alabama, passed for 302 yards and a career-high five touchdowns, highlighted by two long ones to DeVonta Smith, and the top-ranked Crimson Tide rolled over rival No. 22 Auburn 42-13 without coach Nick Saban.

—Sincere McCormick, UTSA, ran for a program-record 251 yards with two TDs in a 49-17 win over North Texas.

—Demetric Felton, UCLA, rushed for career-high 206 yards and a TD as the Bruins defeated Arizona 27-10.

—C.J. Marable, Coastal Carolina, ran for 157 yards and three TDs to help the Chanticleers wrap up the Sun Belt Conference East Division title with a 49-14 victory over Texas State.

Sarah Fuller was playing around with a teammate a couple months ago when she kicked a soccer ball through the uprights from 45 yards away. She joked about being able to kick a football with teammates during the Southeastern Conference soccer tournament.

She made history against Missouri.

Fuller became the first woman to participate in a Power Five conference football game when she kicked off for Vanderbilt to start the second half against the Tigers.

Fuller kicked with a holder rather than using a tee in a designed squib kick, and the senior sent a low kick to the 35-yard line where it was pounced on by Missouri’s Mason Pack. Fuller didn’t get any other opportunities in Vanderbilt’s 41-0 loss to Missouri

Coach Derek Mason made clear that Fuller kicked for the Commodores due to need, not for history or publicity. COVID-19 protocols and restrictions left Mason with very few options, prompting him to reach out to the soccer team for help.

Once the Iron Bowl kicked off, Nick Saban was just another passionate, heavily invested fan who was powerless to help his team win.

Mac Jones passed for 302 yards and a career-high five touchdowns, highlighted by two long ones to DeVonta Smith, and No. 1 Alabama rolled over rival No. 22 Auburn 42-13 without Saban.

The Crimson Tide continued a dominating march through a schedule of all-Southeastern Conference games even minus its six-time national champion coach on the sideline.

Saban tested positive for COVID-19 on Wednesday and watched the game feed from home, witnessing the usual array of big plays with offensive coordinator Steve Sarkisian running the show.

8_Straight games with a TD pass by Florida's Kyle Trask, breaking the record set by Danny Wuerffel in 1996.

31_Years since Washington last rallied from a 21-point deficit to win before beating Utah 24-21.