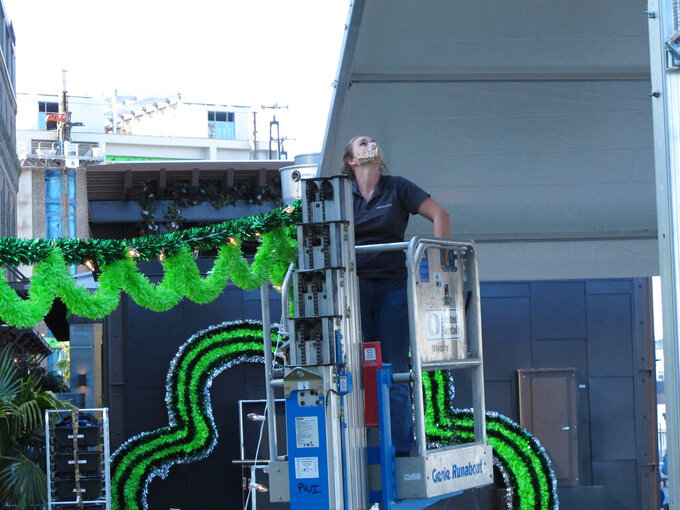 Sarah Hardilek uses a mechanical lift to hang green streamers for St. Patrick’s Day at the Plant Riverside hotel and entertainment complex in Savannah, Ga., on Thursday, March 11, 2021. Savannah officials have cancelled the South’s largest St. Patrick’s Day parade for a second year because of the coronavirus. Regardless, big crowds are expected for the Irish holiday, raising concerns that Savannah’s celebration could cause an outbreak. (AP Photo/Russ Bynum)

SAVANNAH, Ga. (AP) — The South's largest St. Patrick's Day parade is canceled, as is the boozy riverside festival that accompanies it. Regardless, Savannah is preparing for its largest crowds since the yearlong pandemic began — an influx that officials worry could bring a surge in coronavirus infections.

The Irish holiday typically means Savannah's manicured squares and magnolia-shaded sidewalks are packed with thousands of gaudy green revelers on March 17. But with Georgia still reporting at least 1,000 new COVID-19 infections daily while ranking last in U.S. vaccinations, city officials pulled the plug on this year's parade — as they did a year ago when the pandemic was starting.

Likewise, Savannah City Hall withheld a permit for the sprawling St. Patrick's festival that's typically a magnet for beer-fueled revelry along the city's riverfront promenade of bars and souvenir shops.

But sidelining Savannah's largest gatherings hasn't stopped the party. The city's top tourism official says hotels in the downtown historic district could be 90% full this weekend — the busiest they've been in the past year.

“People know that Savannah is a St. Patrick's Day destination, they know the holiday is in the middle of the week and they’re going to come the weekend before and after,” said Joe Marinelli, president of Visit Savannah, the city's tourism bureau. He added that “COVID fatigue and pent up demand” for vacations are helping drive visitation.

Meanwhile, the owner of a new $375 million hotel and nightlife development that covers 1/4 of a mile (0.4 kilometers) along the riverfront is promoting a festival beginning Friday with live music, a large fountain synchronized to Irish music and green lights illuminating the complex built from a shuttered power plant.

Savannah Mayor Van Johnson said the planned festivities at the Plant Riverside development are “a slap in the face” to the city's efforts to curb coronavirus infections by foregoing events that draw big crowds.

“To advertise this huge festival with the intent of drawing people to a particular space in the middle of a pandemic, when we know social distancing and mask wearing is not going to be enforced, is horrible as far as I’m concerned,” Johnson said in an interview.

The hotel and entertainment complex hosting the big festival sits on 4 acres (1.6 hectares) of private property, so it doesn't require a city event permit. Still, the mayor said he could use police to block public access to city-owned routes to the festival property if crowds pose a public health risk.

“Anytime there’s a big influx of people from elsewhere, or just big crowds that are going to be partying to some extent, I get concerns that we’re going to set ourselves up for a superspreader event,” Davis said.

Organizers of the Plant Riverside events insist they can safely manage a big street party. Mark Castriota, the development's managing director, said its staff will “strongly encourage all guests to wear face masks and to practice social distancing.”

“We want to provide an opportunity for people to have fun in a safe environment as part of a new St. Patrick’s Day tradition in Savannah,” Castriota said in a statement emailed to The Associated Press. “We take safety very seriously and will encourage attendees to comply with all City of Savannah requirements and CDC guidelines.”

Georgia Gov. Brian Kemp's standing emergency order prohibits gatherings of more than 50 people unless social distancing is observed. Restaurants can open without capacity restrictions, but must distance tables. Bars and nightclubs can admit at least 50 people without restriction.

The St. Patrick's Day celebration arrives as Georgia ranks last in the nation for vaccinating its population against the virus, with just 17.5% of adults statewide having received at least one shot, according to the U.S. Centers for Disease Control and Prevention.

City Hall hasn't been alone in pushing for increased caution during St. Patrick's Day events. The private committee that organizes the city's 197-year-old parade opted to hold some events without crowds and stream them online — including Friday's ceremony to dye fountain waters in Forsyth Park a glittering emerald green, which usually draws hundreds of cheering onlookers.

Despite the lingering health risks, Savannah's hotels and shops, bars and restaurants are hungry for tourism dollars after a punishing 2020. Marinelli of Visit Savannah said business began rebounding last summer, but taxes collected on hotel and motel stays in Savannah plummeted by 50% overall in 2020.

“Last year hurt a lot,” Marinelli said. “We really need this one badly.”