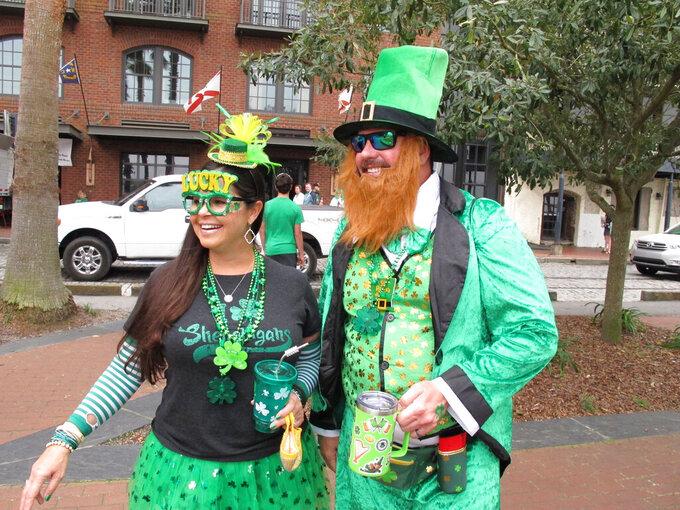 Shanna and Tyson Campbell sip drinks in their St. Patrick's Day costumes as they celebrate in Savannah, Ga., on Wednesday, March 17, 2021. Even with the city's 197-year-old parade canceled, Savannah saw a large number of tourists return for the Irish holiday. Some city officials worried the celebration could cause a coronavirus outbreak. (AP Photo/Russ Bynum)

SAVANNAH, Ga. (AP) — Pulling the plug on the South's largest St. Patrick's Day parade didn't stop the party in Savannah, where gaudy green tourists kept bars, restaurants and hotels busy for days and had police handing out thousands of masks amid fears the revelry could brew a coronavirus outbreak.

Tourism officials and business owners said the Irish holiday Wednesday and the weekend preceding it were the busiest they've seen since the pandemic began a year ago. They credited visitors weary of the virus and given hope by rising vaccinations.

“The 'rona might not be done with us, but there are a lot of people who are done with the ’rona,” said Jessica Walden, co-owner of the bar Bay Street Blues near Savannah's riverfront. “They’re ready to move on and live their lives and be vaccinated.”

St. Patrick's Day is typically the most lucrative time of year in Savannah, where descendants of Irish immigrants have celebrated with a parade since 1824. It has since ballooned into one of the South's biggest street parties after Mardi Gras.

The celebration Wednesday was notably more subdued. Still, a steady stream of people in green T-shirts and bowler hats strolled downtown sidewalks and the riverfront promenade of bars and souvenir shops. Tables outside restaurants were mostly full and a daquiri bar had more than a dozen people lined up by the door waiting to enter.

Only about half the people celebrating outside wore masks, despite a large green banner hanging from City Hall urging revelers to “MASK UP.”

Tyson and Shannah Campbell traveled from Tampa, Florida, to spend several nights in Savannah. He wore a head-to-toe leprechaun outfit to stroll the riverfront Wednesday, while she dressed up in a shamrock-decorated tutu, strands of green beads and novelty glasses that spelled the word “Lucky.” They said it was their first trip away from home since the pandemic began.

“We needed to try to get back to some normalcy,” Tyson Campbell said.

His wife added: “You only live once.”

The March 17 holiday arrived as Georgia continues to average at least 1,000 new confirmed COVID-19 infections per day. Meanwhile, it ranks dead last among U.S. states in the percentage of its adult population to received at least one vaccine dose, according the U.S. Centers for Disease Control and Prevention. In Savannah and surrounding Chatham County, the virus has killed 370 people.

Citing the coronavirus threat, city officials declined for a second straight year to issue permits for the parade and the boozy riverfront festival that accompanies it. Before the pandemic, the last time Savannah canceled a St. Patrick's Day parade was a century ago in 1921, to show solidarity with Ireland in its revolution against English rule.

The parade wasn't the only Savannah tradition disrupted. The annual St. Patrick's Day Mass at the Cathedral of St. John the Baptist, normally packed with 1,000 parishioners before every parade, limited access to just 300 people Wednesday. Others had to watch online.

Meanwhile, Savannah officials pleaded with visitors celebrating the holiday to abide by a citywide mask mandate, which thousands seemed to be ignoring.

“This time of the year is essential for our local economy, especially our small businesses and hospitality and tourism industries,” Johnson told a news conference. “It’s important to note that Savannah is wide open, and the way we stay wide open is to require the use of masks.”

Unlike New Orleans, which shut down bars and erected barricades on Bourbon Street to discourage big crowds for Mardi Gras, Savannah allowed bars and restaurants to open. Restrictions imposed by the state required social distancing measures and employees to wear masks — but not customers once they’re inside a private business.

“The masks are starting to fade," said Patrick Godley, owner of the 17Hundred90 inn and restaurant in Savannah's downtown historic district. “Some people were coming in and saying, `I forgot my mask, but that’s OK because I’ve already got my vaccine.'”

Hotel occupancy in downtown Savannah exceeded 90% last weekend, said Joe Marinelli, president of Visit Savannah, the city's tourism bureau. Not as many people stayed for the midweek holiday, but reservations indicated another busy weekend ahead.

Godley said room and dinner reservations at his business were the best he had seen since the pandemic began. He hopes it's a sign of a spring rebound for tourism even after the holiday passes.

“It was the shot in the arm we needed. This one really boosted morale," said Godley, who compared the pandemic to weathering a natural disaster. “I kept telling myself through all of this that I didn’t run a bad restaurant. I didn’t run my restaurant into the ground.”

Walden said her bar wasn't seeing the wall-to-wall crowds she's used to on St. Patrick's Day. She opened at 11 a.m. Wednesday, four hours later than normal on a parade day, and a doorman was limiting occupancy to 60 people at a time.

She expected profits would be healthy enough to keep her afloat for a period if business gets lean again.

“We always need a good St. Patrick's Day,” Walden said. "That always carries us through the summer and any little hiccups that come.”