SDSU gets rare visit from No. 22 UCLA for season opener 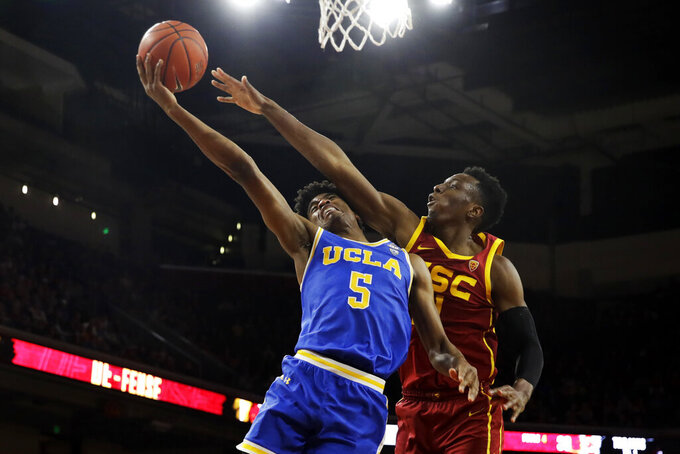 FILE - In this Saturday, March 7, 2020, file photo, UCLA guard Chris Smith (5) drives to the basket as Southern California forward Onyeka Okongwu defends during the second half of an NCAA college basketball game, in Los Angeles. After flirting with the NBA draft, Smith has returned to UCLA for the 2020-21 season. (AP Photo/Marcio Jose Sanchez, File)

SAN DIEGO (AP) — Uncertainty due to the coronavirus pandemic and a long friendship between coaches Brian Dutcher of San Diego State and Mick Cronin of UCLA led to the No. 22 Bruins committing to a rare regular-season appearance on the Aztecs' home court.

The Aztecs will host the Bruins on Nov. 25 as part of a four-team event at Viejas Arena, with Pepperdine playing UC Irvine. On Nov. 27, SDSU will play UC Irvine and UCLA will play Pepperdine.

Fans will not be allowed.

SDSU will face UCLA for the first time since beating the Bruins 78-69 in the 2012 John R. Wooden Classic in Anaheim.

SDSU has played several home-and-home series with other Pac-12 schools in recent seasons. UCLA, which has 11 NCAA championship banners hanging in Pauley Pavilion, hasn't been one of them.

“UCLA, which is their history, rarely goes on the road in Southern California,” Dutcher said. “They don’t play a road game in the state. You have to go to Pauley to play them. But Mick Cronin and I have been friends a long, long time."

Both teams had been scheduled to play in a bubble in Orlando.

“Neither one of us were overly excited about putting our teams on a flight for five hours to play basketball during COVID," Dutcher said.

When the bubble was canceled, “Mick was more than willing to come play us as part of a Southern California event, along with Pepperdine and UC Irvine, where teams can just get on a bus, come down to San Diego and get a couple of really quality games out of the event."

The only drawback, Dutcher said, will be a lack of fans at the 12,414-seat campus arena, where a raucous student section has given the Aztecs a formidable home-court advantage over the years.

“That’s what we’re going to be missing, obviously. Maybe that was one of the reasons Mick agreed to come. He knew the building would be empty," Dutcher said with a chuckle.

The Bruins have twice played at Viejas Arena in the NCAA Tournament, in 2006 and 2014, winning twice both times to reach the Sweet 16.

San Diego State was 30-2 last year, won the Mountain West regular-season title and was expected to receive either a No. 1 or 2 seed in the NCAA Tournament before it was canceled due to the pandemic. The Aztecs lost Mountain West Conference Player of the Year Malachi Flynn to the NBA draft, as well as senior transfers Yanni Wetzell and K.J. Feagin.

UCLA was 19-12 last season under Cronin, who was named Pac-12 Coach of the Year in his first season in Westwood.

“Our relationship goes back many, many years,” Dutcher said. “I've followed his career with great interest as he's done an outstanding job at Cincinnati as a head coach and now at UCLA, bringing the Bruins back to national prominence and rankings.”

Dutcher put this event together quickly, with Cronin's help.

“He was excited by the idea. He wanted to play good teams,” Dutcher said. "He knew that we had been historically good. It's a credit to him. He's not afraid to go to a neutral floor in order to play good games. It will be a lot more neutral than it would have been if we had fans in the stands, but I'm excited by him wanting to come here and then to play a very good Pepperdine team in another game here.”

SDSU was ranked as high as No. 4 last year and finished at No. 6. It was not in The Associated Press preseason Top 25.

“We were unranked to start last season and had a magical season,” Dutcher said. "I'm not discouraged by that. We’ll have opportunities if we do what we’re supposed to do with our nonconference schedule to put ourselves on the map heading into the conference season.”