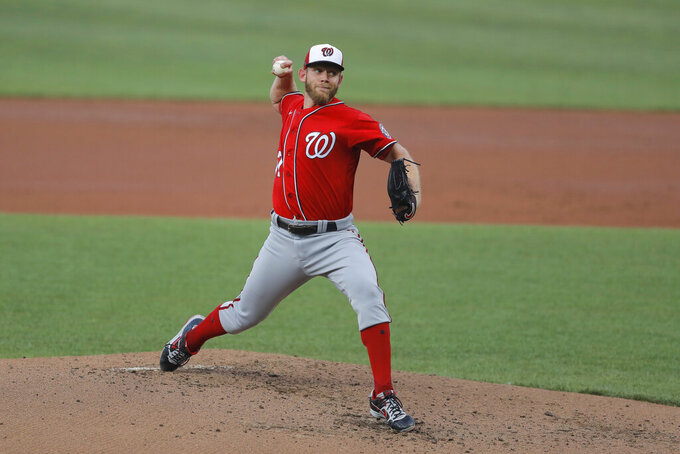 FILE - In this July 20, 2020 file photo, Washington Nationals starting pitcher Stephen Strasburg delivers a pitch to the Baltimore Orioles during an exhibition baseball game in Baltimore. Strasburg has been scratched from what was supposed to be his first start of the season for the Washington Nationals because of a nerve issue with his right hand. Nationals manager Dave Martinez announced the news about four hours before the scheduled first pitch against the visiting New York Yankees on Saturday, July 25. (AP Photo/Julio Cortez, File)

WASHINGTON (AP) — World Series MVP Stephen Strasburg was scratched from what was supposed to be his first start of the season for the Washington Nationals on Saturday night because of a nerve issue with his right hand.

Nationals manager Dave Martinez announced about four hours before the scheduled first pitch against the visiting New York Yankees that Strasburg would be replaced as his team's starter by Erick Fedde.

Strasburg described the problem as a nerve impingement in his wrist and said it initially arose early this month when teams reconvened for a ramp-up to the regular season. One of the first symptoms was that his hand would fall asleep.

He felt something wrong from his wrist to his thumb, particularly during his most recent appearance, in an exhibition game against the Baltimore Orioles last week.

“It got to the point where I didn't have the same feeling in my hand holding the ball,” Strasburg said, “and it was affecting my ability to command the baseball the way I'm accustomed to.”

The right-hander said he felt improvement in his fingers after receiving his “last shot” on Friday — both he and Martinez likened the treatment to a cortisone injection — but Strasburg didn't elaborate when asked whether that meant he got more than one.

He said he hopes resting now will allow him to “be back much sooner than if I try to gut it out at this point.”

Strasburg said he wasn't “extremely concerned” and doubts he will be sidelined for too long.

Martinez's take: “Hopefully this is a day-to-day thing. We want to be cautious.”

Martinez said this was unrelated to a forearm problem Strasburg dealt with in the past.

Just one game into the pandemic-delayed season — a 4-1, rain-shortened loss to the Yankees on Thursday — the Nationals already are faced with plenty of bad news.

A bit of welcome news for Martinez and his club at the outset of this 60-game experiment of a season: All of the coronavirus tests taken Thursday by the Nationals came back negative Saturday.

“To be frank,” Strasburg said, “this season is a bit of mess.”

In 2019, Strasburg became the first pitcher to finish a postseason with a 5-0 record, helping the Nationals claim the franchise's first championship. He then opted out of what was left on his contract and re-signed with Washington for $245 million over seven years.

Note: Martinez said rookie third baseman Carter Kieboom has a “little, slight groin issue" that gives him trouble when he moves laterally, so would start as the DH on Saturday.