Shock and sadness as Oxfam plans exit from 18 countries 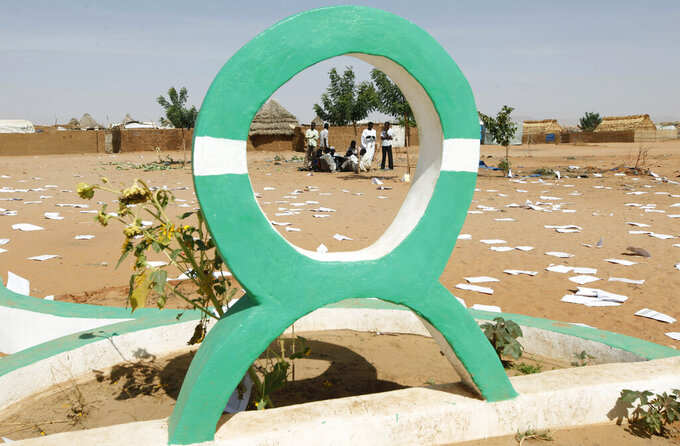 FILE - In this Sunday, March 21 2009 file photo, Sudanese refugees gather behind the Oxfam logo at the site of the looted compound of the expelled British aid group, Oxfam at Al Salam refugee camp, outside the Darfur town of al-Fasher, Sudan. Oxfam, one of the world’s leading aid agencies, is to severely curtail its work around the world because of the financial strain caused by the coronavirus pandemic, including the closure of operations in 18 countries at the potential cost of over 1,000 jobs. (AP Photo/Nasser Nasser, File)

LONDON (AP) — The decision by Oxfam International to close operations in 18 countries in response to the devastating financial impact of the coronavirus pandemic was met with shock and sadness Thursday across developing countries where the aid organization has often been helping the needy for decades.

Oxfam, which currently operates in 66 countries and whose global work is coordinated via 20 affiliate offices around the world, said in a statement late Wednesday that it has had to accelerate and deepen changes that it was mulling as a result of the pandemic.

“We’ve been planning this for some time but we are now accelerating key decisions in light of the effects of the global pandemic,” said Oxfam International’s interim executive director Chema Vera.

The most notable changes involve its exit from countries around the world. Among those it is planning to leave are Afghanistan, Cuba, Egypt, Rwanda and Sri Lanka. It said 1,450 out of nearly 5,000 program staff could lose their jobs and that there will be an impact on 700 out of its nearly 1,900 partner organisations.

In Liberia, in West Africa, for example, Oxfam has been present since 1995 and has been helping local partners to increase access to essential services like safe drinking water and sanitation facilities.

Bobby Whitfield, Chairman and CEO of Liberia’s National Water Sanitation and Hygiene Commission, said in a statement, that Oxfam's decision to leave the country must have been “tough” but that it had come as a "shock.”

“Water, sanitation and hygiene are at the heart of this fight against COVID-19," he said. "So it must be at the center of our response. To see one of our partners closing down their operations when we need them most is truly devastating.”

And in nearby, Sierra Leone, the country's minister of development and economic planning, Dr. Francis Kaikai, said it was “unfortunate” that Oxfam, which has been working in the country since 1998, has had to leave though he had yet to receive formal notification.

“We will feel it because they had their own niche in our development efforts," he said. "Any partner we lose which is involved in our development plans, especially in the current global pandemic is something of significance to the government.”

Oxfam insisted that the changes will be phased and that its departure does not necessarily mean the end of its involvement in those countries. It said it will continue to advise local aid agencies and could launch fund-raising events where and when needed.

The organization had started a 10-year strategic review in late 2018, which coincided with the fallout of a sex-abuse scandal in Haiti in the wake of the earthquake in 2010 that had devastated the country.

The scandal caused a global outcry and prompted many donors to withdraw their support, particularly in the U.K., where Oxfam started operations back in 1942. Haiti, where its brand has been seriously diminished, is another one of the countries that Oxfam is leaving.

Oxfam had steadied the ship after the fallout of the Haiti revelations and its revenues in 2018-19 held steady at around 1 billion euros ($1.1 billion).

However, the pandemic has caused much of Oxfam's income stream to dry up, and the worry must be that other aid organizations are seeing similarly acute pressures on their finances.

Many of Oxfam's charity shops have been shuttered during the lockdown restrictions imposed around the world and its key fundraising events, such as the Glastonbury Festival in southwest England in June, have been cancelled. However, institutional fundraising from the likes of national governments and international organizations such as the European Union, has held steady.

“The tough decisions we announce today will allow us to continue making a positive impact on the lives of people living in poverty in ways we believe will be even more relevant and focused than before," Oxfam's Vera said.

Vera said the changes, combined with further "phases of transformation in the months ahead,” will lay “the foundation for our future over the coming decade as the longer-term effects of this devastating pandemic become clearer.”

Jonathan Paye-Layleh in Monrovia, Liberia and Clarence Roy-Macaulay in Freetown, Sierra Leone contributed to this report.