Shuster to become 1st curler to carry US flag at Olympics 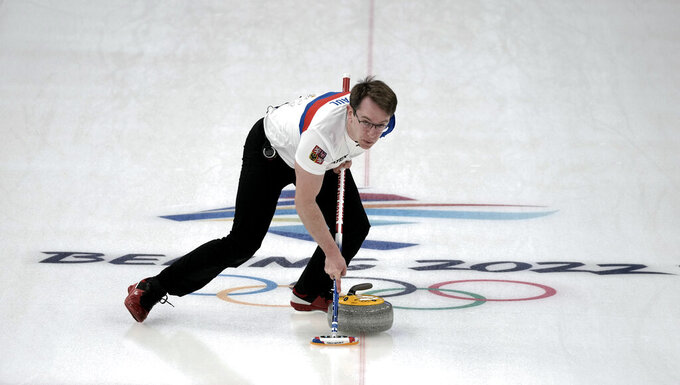 BEIJING (AP) — Before he throws a stone at the Beijing Games, John Shuster will become the first curler to carry the American flag in an Olympic opening ceremony.

That's a big deal for a sport that's becoming more popular in the United States thanks to Shuster's Olympic exploits.

The defending gold medalist and five-time Olympian was elected by his fellow American athletes to lead the United States into the Bird's Nest on Friday along with Brittany Bowe. Bowe, a three-time Olympian, was the first runner-up and will walk in place of bobsledder Elana Meyers Taylor, who tested positive for COVID-19.

The announcement of the flag bearers came shortly after competition at the Beijing Olympics began Wednesday with the opening games of mixed doubles curling at the Ice Cube, the reconfigured venue where Michael Phelps won a record eight swimming gold medals at the Summer Olympics 14 years ago.

Chris Plys and Vicky Persinger finished off a big night overall for the Americans by holding on to beat Olympic newcomer Australia 6-5 when Tahli Gill's final stone whizzed past an American rock in the house.

Plys, an Olympic rookie who also is on the men's team, participated in a video call earlier Wednesday during which Shuster was informed of the honor.

“Man, I was so stoked,” Plys said. “John's been a heck of a teammate to me and a heck of friend to me and seeing him get an honor like that and curling get an honor like that at an Olympic Games, in a country like the U.S. where curling hasn't really been a household sport, I couldn't be happier for him. I'm excited to see him and get to share that moment with him in a couple of days.”

Shuster and the other members of the men's team were in Los Angeles and are due in Beijing early Friday.

“It was a very special moment," Plys said. "I think he was getting a little choked up. It's hard to see it through the screen. But I do know how much the Olympics mean to John and how proud of an American guy he is and how much of an honor that'll be for him and his family. Couldn't happen to a better guy.”

In a statement, Shuster called it “one of the greatest honors of my sporting career.”

Shuster won bronze in 2006 — the first-ever U.S. Olympic curling medal — as the lead for Pete Fenson’s team. He left to form his own rink, earning a trip to Vancouver but performing so badly that he benched himself.

After finishing dead last in 2010, Shuster won the U.S. trials again four years later but managed just a ninth place in Sochi. When USA Curling put together a high performance camp of the country’s top 10 players, Shuster didn’t make the cut. So he put together a foursome that called itself “Team Rejects” and not only beat the federation-backed squads in the U.S. trials but won gold in South Korea after surviving five straight elimination matches.

The men's competition starts next Wednesday.

The clanking of granite stones slamming into each other and the shouting and sweeping of the mixed doubles curlers were more pronounced than normal in the mostly empty arena. There were only a few hundred spectators in the 3,759-capacity venue because of COVID-19 protocols.

Curling is being held at the Ice Cube, which was converted from the Water Cube, the swimming and diving venue for the 2008 Summer Games. The venue can be transformed back to a swimming pool.