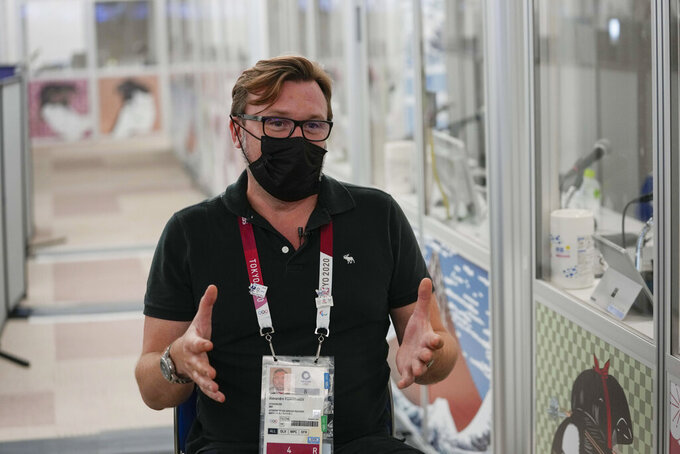 Alexandre Ponomarev, the chief interpreter for the Tokyo Games, gestures during an interview with The Associated Press at the main press center during the 2020 Summer Olympics, Friday, July 30, 2021, in Tokyo, Japan. Ponomarev worked his first Olympics in 2008 in Beijing, and took over as the chief in Rio de Janeiro in 2016. He said his mother got him started with language-learning, smuggling DVDs of American films into the old Soviet Union. One by one, the languages piled up.(AP Photo/Luca Bruno)

TOKYO (AP) — Ask him how many languages he speaks, and Alexandre Ponomarev replies: “If you mean to make myself understood, I've lost count.”

Ahh, but how about your Japanese?

“Muzukashi,” replied Ponomarev, which means “difficult” in Japanese, and can be interpreted to mean he doesn't speak much.

Ponomarev is the chief interpreter for the Tokyo Games, overseeing a staff of almost 100 interpreters who render Olympic joy and Olympic heartbreak into a calibrated cacophony of 11 languages: Japanese, English, French, Spanish, German, Russian, Italian, Arabic, Chinese, Korean, and Portuguese.

Ponomarev worked his first Olympics in 2008 in Beijing and took over as the chief in Rio de Janeiro in 2016. His mother got him started with language learning, smuggling videos of American films into the old Soviet Union. One by one, the languages piled up.

“When somebody walks into a room full of interpreters, and it's somebody who doesn’t speak the languages, it does feel like the Tower of Babel," he explained. "You can see people speaking at the same time in all these dialects and languages and using strange words. It may seem crazy but we are actually not.”

What they are in Tokyo is busy.

Most work in the Main Press Center in a cable-strewn room with 20 translation booths lining the walls. Wires, screens, and computer coders splice their words onto a network. The booths are decorated with Japanese art from famous masters like Hokusai, and carry labels like JPN or ENG to designate the languages being worked.

Unlike previous Olympics, all the interpretation is being done remotely. Press conferences from remote venues are fed into the press-center hub. Some two dozens interpreters aren't even in the country, chiming in from the Americas or Europe to handle late night events in Japan.

Their simultaneous translations can be accessed at all Olympic venues on an app. This eliminates interpreters getting tied up in traffic heading to a venue — and there's no longer any need to distribute handheld translation devices.

“We are here in the press center all the time, and we watch the events on the TV just like anybody else,” said Andrea Hofmann Miller, a German interpreter. “In Rio, we had to be on the bus for about four hours just to get to the swimming venue. And in my case, if a German-speaking athlete didn't win, we spent eight hours on a bus for nothing.”

Ponomarev pointed out that cultural differences affect language. He may assign a speaker of Brazilian Portuguese to a Brazilian, and a peninsular Portuguese speaker to someone from Portugal; likewise with Spanish, which is spoken differently across 20 countries.

A visitor entering his office the other day found Ponomarev speaking Spanish with an accent from Spain. He was chatting with an Argentine, a Venezuelan and another Spaniard. They were all speaking their own brand of Spanish, and a few times they slipped into French.

“When you get four or five interpreters in the room, and they all share at least two or three languages, they automatically switch back and forth,” Ponomarev explained. “The conversation starts in one language then quickly switches to another simply because another language is more conducive to talking about a specific topic.”

For a polyglot, toggling among several language seems more natural than staying in only one, sort of like a musician who plays several instruments. He used the example of the German word “schadenfreude," which means pleasure derived from the misfortune of others.

"This kind of word exists only in German and it would be difficult to express that concept in English. By the same token, there are concepts that exist only in Russia and we don’t convey them very well in any other language. To avoid lengthy descriptions, we switch to another language and people will understand instantly.”

He said his interpreters all bone up before the Olympics, studying the nuances of judo or the vagaries of Modern Pentathlon. But they can be stumped, particularly in new events like surfing and skateboarding.

“These are young people and they have their own speak,” he said. "If somebody says ‘the wave are bad, man' — meaning the waves were great.”

Ponomarev and much of his staff have worked high-powered political events like the G20 or the World Economic Forum, which are far trickier than the Olympics.

“There you have a wide variety of people — presidents, royalty, politicians, interesting influencers, you name it," he said.

Sometimes, though, things can get incredibly delicate at the Olympics. Hofmann Miller nearly teared up talking about the 2010 Winter Games in Vancouver, where Georgian luger Nodar Kumaritashvili died in a training run before the opening ceremony. He lost control of this sled and hit a steel pole beside the track.

“I was chosen to do the press interview for that, and it was a very, very sad event and I will never forget that,” she said. “It was very moving, and it was really tough for all of us sitting on stage taking the questions from the press and to keep our emotions back.”

Interpretation is, in the end, more art than science — a discipline that requires skill, yes, but a strong dose of humanity as well. Both Ponomarev and the German interpreter, Hofmann Miller, acknowledge cheering for the athletes, or sympathizing with them in defeat.