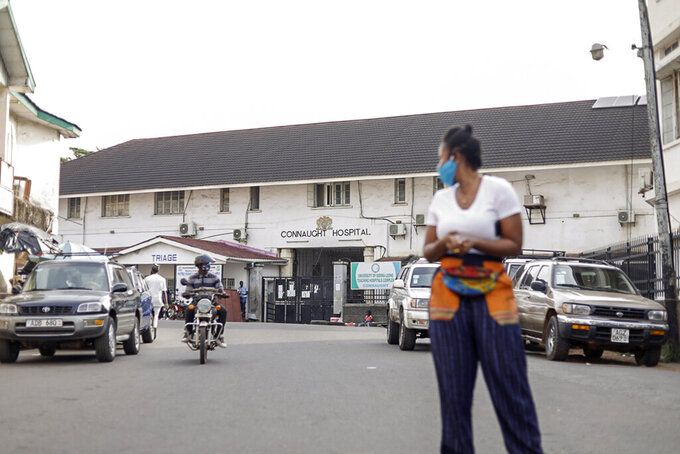 The Connaught Hospital is seen in the capital Freetown, Sierra Leone Friday, May 8, 2020. Despite the loss of colleagues, Dr. Mamadu Baldeh, one of only four physicians managing the COVID-19 unit at the hospital, is fighting not only to save his coronavirus patients but also to provide quality care for those afflicted with other infectious diseases as he and other health care workers fight for a better system. (Vicki Remoe/VRC Marketing via AP) 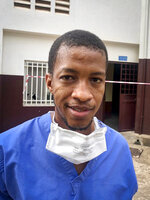 DAKAR, Senegal (AP) — Dr. Mamadu Baldeh can’t forget the 18-year-old who came into his hospital with COVID-19, gasping for air until the day he died. This suffering was all too real for Baldeh, who battles asthma just as that young man did.

At the time, Baldeh, 32, was the only physician treating COVID-19 patients at Sierra Leone’s main public hospital.

“This moved me significantly and made me very worried at the time,” the doctor recalled of the young man, one of dozens who has now died from the virus at Connaught Hospital, in the capital, Freetown. “And really I couldn’t figure out how or why I kept my composure.”

The patient was so young, restless and wasn’t responding well to any of the attempted treatments, Baldeh said, recounting how difficult it was to watch him struggle.

That was May. Now there have been hundreds of cases and the staff at the hospital’s COVID-19 unit has swelled to four doctors and 20 nurses. Until the additional doctors arrived, he was sleeping at the hospital practically every night instead of returning to his home where he stays with his sister and nephew, Baldeh said in his calm, matter-of-fact manner.

But supplies remain a struggle. Sometimes patients must share oxygen tanks, and often patients can’t get or even afford medications they need.

COVID-19 is an added burden on Sierra Leone’s fragile health system, which is still recovering from an 11-year civil war that ended in 2002 and an Ebola outbreak that killed nearly 4,000 people between 2014 and 2016.

Sierra Leone, a West African country of 7.6 million people, has reported more than 2,168 confirmed cases of COVID-19, including 72 deaths, according to figures released Tuesday by the Africa Centers for Disease Control and Prevention.

Baldeh is the medical officer in charge of the hospital’s infectious diseases unit in a hospital that serves the highest number of TB patients in the country. He must disinfect himself several times a day going between the wards to avoid the risk of passing COVID-19 to those among the most vulnerable. He is a general practitioner, looking to specialize in infectious diseases, so he reports to his mentor, the only infectious disease specialist in Sierra Leone, who works elsewhere in Freetown.

Baldeh is also the head of the Junior Doctors Association of Sierra Leone, in a nation where more than 80% of doctors are under the age of 35. Many more, like him, trained overseas and are now choosing to return to help support the healthcare system.

He makes appearances on talk shows to give advice about COVID-19 and has been campaigning with colleagues for better conditions for healthcare workers and patients.

In July doctors went on strike to demand hazard pay for working in the COVID-19 unit. Protective equipment also has been in short supply.

Even before the coronavirus, doctors in Sierra Leone often would go on strike for better pay and essential supplies. COVID-19 has once again drawn attention to the pressing needs just four years after the disastrous Ebola epidemic.

At the start of the pandemic, Baldeh and his colleagues tried to memorize patients’ vital statistics to avoid spreading the disease by touching possibly contaminated paperwork. Now, they write the information on a sheet of paper and put it in an area called the hatch, where food is distributed. Doctors and nurses then take photos of the data with their smartphones, he said.

Despite all precautions, several colleagues in Freetown have contracted COVID-19 and at least four have died, devastating morale. Two died before test results confirmed they had the disease. Many of the healthcare workers who have died didn’t necessarily get it from working in the COVID-19 unit, Baldeh said.

To him, COVID-19 is another in a long line of challenges facing Sierra Leone’s healthcare system, from infrastructure to leadership, which he hopes to help improve.

“All these undermine the fate of many patients,” he said.

Despite the challenges, Baldeh said being a doctor has always been his passion. Not a day goes by that he regrets his choice of career.

“My mantra is and always has been service to others and appreciation for getting to where I am today,” he said. “I serve because I believe I owe that to everyone I may have come in contact with.”

COVID-19 has been Baldeh’s greatest professional test, and he believes he has passed.

“I don’t think I’m scared anymore,” he said. “Sometimes you get used to the situation, even though it’s not a good thing.”