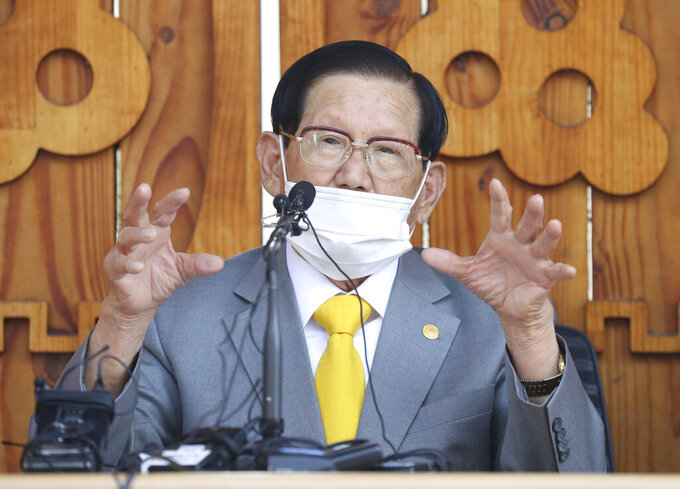 FILE - In this March 2, 2020 file photo, Lee Man-hee, a leader of Shincheonji Church of Jesus, speaks to the media during the press conference in Gapyeong, South Korea. Singaporean authorities on Wednesday, Nov. 11, have arrested 21 people who are thought to be connected to a secretive South Korean religious sect that was widely blamed for thousands of virus infections in that country.(Kim Ju-sung/Yonhap via AP, File)

SEOUL, South Korea (AP) — Singaporean authorities have arrested 21 people who are thought to be connected to a secretive South Korean religious sect that was widely blamed for thousands of virus infections in that country.

The 12 women and nine men were arrested for “allegedly being members of an unlawful society," Singapore’s home affairs ministry said.

Its statement issued late Wednesday added that the groups had been participating in “activities connected to the unregistered local chapter of the Shincheonji Church of Jesus,” which is registered in South Korea.

It did not release their nationalities, but said the church had been ordered to cease operations last February and said five Korean members had been deported then.

A church spokesperson in South Korea said it was trying to confirm details about the arrests. Kim Young-eun said the church doesn’t believe its members in Singapore have participated in face-to-face worship services or other gatherings since the eruption of the COVID-19 crisis.

“In spite of the actions taken, the local SCJ chapter has resumed its activities covertly, under the direction of its South Korean parent chapter,” the home affairs ministry said, adding that the Singaporean government “will not allow members of unlawful societies or persons associated with them to threaten Singapore’s public safety, peace and good order.”

If convicted, the 21 could face up to three years imprisonment and a fine.

In August, South Korean prosecutors arrested the sect's leader as part of an investigation into allegations that his church hampered the government’s anti-virus response after thousands of worshippers were infected in February and March.

But the 88-year-old Lee Man-hee on Thursday was granted bail by the Suwon District Court, which cited concerns over his health. The court required Lee to wear electronic tracking devices and not to leave his home.

Lee and his church have steadfastly denied the accusations against them, saying they’re cooperating with health authorities.

More than 5,200 of the South Korea’s 27,942 coronavirus cases have been linked to the church. Its branch in the southern city of Daegu emerged as the biggest cluster after infections spiked in late February.

Health authorities used an aggressive test-and-quarantine program to contain the outbreak in Daegu and nearby towns by April, but the country has seen a resurgence of the virus in capital Seoul and elsewhere since.