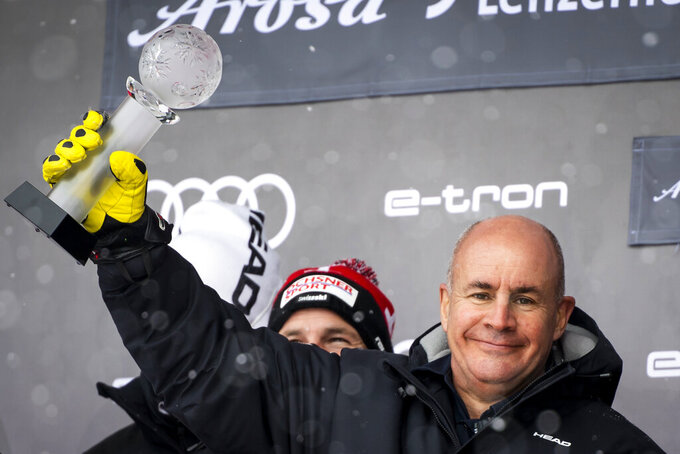 FILE - Johan Eliasch, Chairman of the Management Board of the HEAD group celebrates on the podium at the FIS Alpine Skiing World Cup finals, in Parpan-Lenzerheide, Switzerland, Sunday, March 21, 2021. Eliasch has been re-elected to lead skiing and snowboarding through the 2026 Olympics. (Jean-Christophe Bott/Keystone via AP, File)

GENEVA (AP) — Re-elected to lead skiing and snowboarding through the 2026 Olympics, Johan Eliasch believes his mandate for change trumps pushback from traditionalists.

Eliasch was unopposed on the International Ski and Snowboard Federation (FIS) ballot but some in the room and online for the election meeting in Milan challenged the voting rules and a few delegates walked out.

Pursuing those policies with a leadership style forged in business provoked protests on Thursday from Austria, Switzerland, Germany and Croatia — all World Cup organizers reluctant to give up marketing control of their events or their slots on future race calendars.

They left no doubt this week that he's not their choice.

Asked whether any ill-feeling toward him will linger, Eliasch took a long pause in a telephone interview with The Associated Press.

"I think everybody realizes that it would be bad for them to be seen to stand in the way of change,” he said. “We will get through this.”

His win again showed how in Olympic sports politics a few nations that dominate on the field of play can be outvoted by broad support elsewhere.

"I was elected FIS president with a clear mandate for change including that FIS should be a federation for all our members,” Eliasch said, echoing terms often used by leaders of soccer’s FIFA.

Soccer bodies also rely on a centralized marketing model that Eliasch wants for FIS. He also admires the packaging of Formula One.

Eliasch compares F1 to skiing’s dynamic of athletes guided by team principals and relying on technicians, and leans on its long-time former boss Bernie Ecclestone for advice.

“We need a television show like ‘Drive to Survive,’” Eliasch said of the Netflix hit that takes viewers behind F1 scenes. “We can’t do that because we don’t have the (broadcast) rights.”

Court battles with the Swiss agency Infront, FIS’ partner in a joint venture since 2009, have marked Eliasch’s first year in office. The rulings have so far gone his way.

Eliasch said FIS is cash-rich enough to give “cast-iron guarantees” to member federations of matching their current deals with Infront: “We can back it up any day of the week.”

Now comes the diplomacy of consulting with federations that organize World Cups in skiing, freestyle and snowboard disciplines “to find out how we are going to do this together,” Eliasch said. “The longer we wait, the more we miss out.”

Next winter’s World Cup seasons are secure, he insisted, and will quickly showcase a new idea in an iconic alpine location as soon as Oct. 29.

A cross-border downhill course for men and women overlooked by the Matterhorn mountain peak will start in Switzerland and finish in Italy. That the races will debut this year instead of 2023 is seen as a signature win for the president.

Another is taking the alpine World Cup back to North America in prime late-season as well as the traditional two-week swing after Thanksgiving in late November. Palisades Tahoe will host men’s races on Feb. 25-26 and Aspen one week later.

A tougher challenge could be persuading the International Olympic Committee to add women’s Nordic combined to the 2026 Milan-Cortina d’Ampezzo Games. It’s the last barrier to a fully gender-balanced Olympics.

Making the proposal to the IOC is one thing FIS delegates could agree on this week.

“I think even those people who don’t like me, they also want to have a great product,” Eliasch said. “So there is no dispute there.”