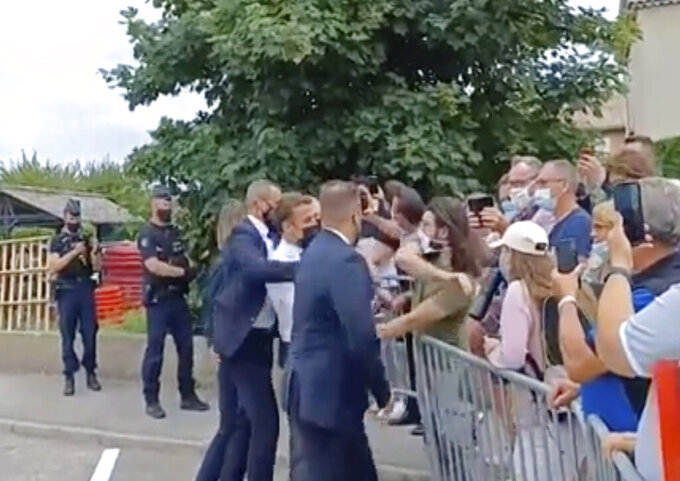 In this grab taken from video France's President Emmanuel Macron, centre, is slapped by a man, in green T-shirt, during a visit to Tain-l’Hermitage, in France, Tuesday, June 8, 2021. Macron denounced “violence” and “stupidity” after he was slapped in the face Tuesday by a man during a visit to a small town in southeastern France. The incident prompted a wide show of support for the head of state from politicians across the ideological spectrum. A video shows a man slapping Macron in the face and the president's bodyguards pushing the aggressor away as the head of state was quickly rushed from the scene in the town of Tain-l’Hermitage. (BFM TV via AP)

PARIS (AP) — Bubbling beneath France’s political landscape is an assortment of ultra-right groups, a subculture that shot to the nation’s attention when a young man slapped President Emmanuel Macron and blurted out a centuries-old royalist cry.

Ultra-rightist groups are considered increasingly dangerous despite their small following and are on the radar of authorities. Numerous arrests have been made and several groups banned. Challenges to the French identity are often at the center of their ideologies.

During Wednesday’s Cabinet meeting, Macron stressed the incident a day earlier was “an isolated act by a violent individual” that wouldn’t stop his direct contact with the population.

“No violence can be considered banal in the country,” government spokesman Gabriel Attal said.

The town of Tain-l’Hermitage, where the assault occurred, was the president’s most recent stop on a tour designed to “feel the pulse of the country” that’s been laid low by the coronavirus and trying to get back on its feet.

Damien Tarel, 28, the man who slapped the president, and a second man, identified only as Arthur C., also 28, were quickly arrested. Neither had police records, the local prosecutor said.

Tarel told investigators he struck out without thinking, the prosecutor’s office said. He is to appear in court Thursday on a charge of violence against a person invested with public authority.

While Tarel’s motives remained unclear, it was his Medieval-era cry “Montjoie! Saint Denis!” as he slapped Macron’s cheek, that pointed to the aggressor’s potential interest in the tiny royalist fringe movement. Social media posts showed he followed royalist TV channels and a smattering of extreme-right figures.

At the home of Arthur C, police found weapons, old books on the art of war, a copy of Adolf Hitler's manifesto “Mein Kampf,” and two flags, one symbolizing Communists and another of the Russian revolution, the prosecutor's office said. He is to be summoned to court next year for illegal possession of arms.

Tarel told investigators he was close to the Yellow Vest movement for social and economic justice, but also held right- or ultra-right political convictions without being a member of a party or group, according to a statement by the prosecutor's office.

“Testimony of witnesses and (Tarel’s) companion do not add clarity to what motivated” the suspect to slap Macron, the prosecutor's office said.

In 2018, the royalist call-to-arms dating to Medieval times was cried out by someone who threw a cream pie at the far-left lawmaker, Eric Coquerel. The extreme-right pro-monarchist group Action Francaise took responsibility. Action Francaise did not claim a role in Tuesday’s slapping incident, but hours later tweeted, “Vive la tarte a Tain," a play on words combining the slang for “slap” (tarte), the French apple desert, tarte tatin, and Tain-l’Hermitage, where the incident occurred.

Far-right leader Marine Le Pen was among political chiefs to quickly condemn the assault. Le Pen, a candidate in 2022 presidential elections, has spent years working to rid her National Rally party of extremist elements who gravitated around her father’s National Front party, which she renamed.

Obscure to most of France, ultra-right movements are a priority on the radar of investigators.

A probe into an alleged plot uncovered in 2018 against Macron by a mini-group whose members were scattered around France is still in progress. The group, known as Les Barjols, was ordered disbanded.

Mediapart, an online investigative outlet, reported last month that investigators are on alert for the eventual return of ultra-right terrorists. It cited a confidential report from the prosecutor’s office detailing the professionalism and ability to obtain weapons by some groups. It said 17 deaths can be attributed to the ultra-right between 2016-2019, and quoted investigators as counting about 1,000 militants and 2,000 followers of the ultra-right.

In March, France banned Generation Identity, citing its ideology “inciting hate, violence or discrimination of individuals ... based on origins, race or religion.” The organization was known for spectacular actions to get out its anti-migrant message in what it claimed was a mission to preserve French and European civilization.

Tarel's social media profile showed an interest in medieval combat and martial arts, confirmed by a friend in an interview on BFMTV. The friend, identified only as Loic, said he was “stunned” by the slap. In October 2018, Tarel put out a call on a social media platform for funds for an association of Medieval martial arts in the town where he and Arthur C. were born and live, Saint-Vallier, with a population of under 4,000.

Four hours before Tuesday's assault, a TV news show, Le Quotidien, broadcast a brief clip of Tarel, Arthur C. and another man waiting to see Macron. Neither Tarel nor Arthur C. spoke, but the third person said: “There are things that should be said, but unfortunately cannot be said.”

Among the issues, he said, was “the decline of France.”