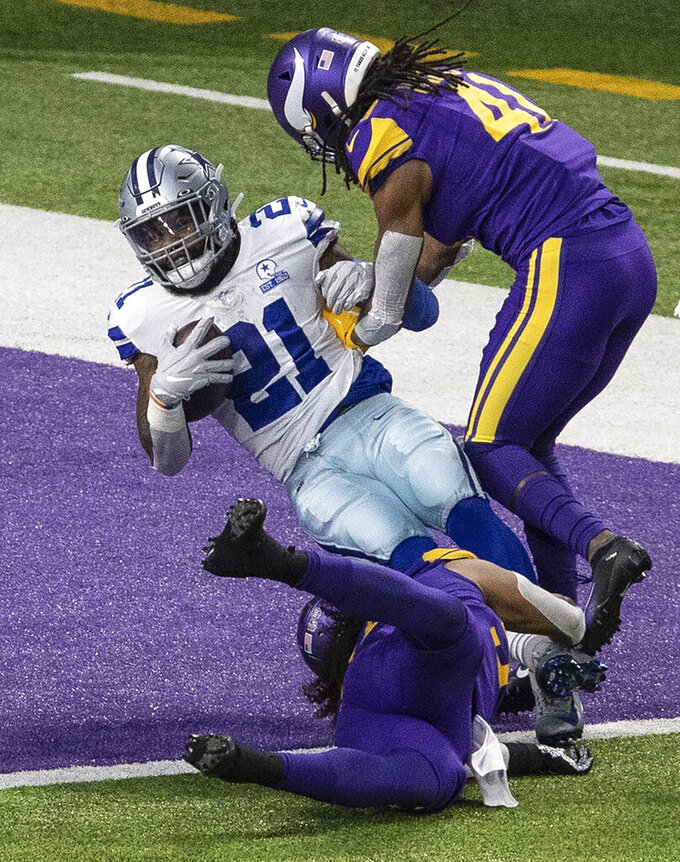 ARLINGTON, Texas (AP) — Alex Smith and Andy Dalton have 25 years of experience as NFL quarterbacks combined but just one Thanksgiving start between them.

The veterans whose teams didn't expect them to be in charge of the Washington and Dallas offenses when the season started will meet Thursday at the home of the Cowboys.

And that's not the only improbable storyline. Despite both clubs being 3-7, the winner will be in first place in the NFC East for at least a few days, longer if Philadelphia loses this weekend.

Smith was days away from a second career Thanksgiving start two years ago when Washington played at Dallas. But his horrific, career-threatening leg injury came the Sunday before against Houston.

Smith's first appearance since that day was in Week 5 this year, followed by the 36-year-old's first start two games ago after an injury to Kyle Allen, who took Dwayne Haskins' job earlier this season, and his first victory last Sunday against Cincinnati.

“An opportunity like this doesn’t get any cooler than this week to play on Thanksgiving,” said Smith, who lost his other Thanksgiving start for San Francisco against Baltimore nine years ago. “It has special meaning for me, especially considering two years ago and on the eve of this game was when everything happened. It’s crazy to come a full circle.”

Dalton's Thanksgiving debut comes four days after he helped end a four-game losing streak with his first win as the Dallas quarterback, 31-28 over Minnesota.

The former Cincinnati starter replaced Dak Prescott, who is out for the season with a broken ankle, before missing two consecutive games himself. The first was because of a concussion sustained in Washington's 25-3 win in Week 7, the second after a positive COVID-19 test.

“I’m very happy for the offense and Andy, him being away,” coach Mike McCarthy said. “He really gave us the ability to stay with the run and the pass. That’s the way we want to play.”

Washington has the best pass defense in the NFL, thanks in large part to the pass rush led by rookie No. 2 overall pick Chase Young and 2019 first-rounder Montez Sweat. The secondary has rounded into form with cornerbacks Kendall Fuller, Ronald Darby and Fabian Moreau making up for weaknesses at safety.

Against the Bengals, the defense gave up several long drives in the first half but allowed just nine points before Joe Burrow suffered a season-ending knee injury in the third quarter. Is there something to that?

“More so than anything else is it changes what an offense can do,” coach Ron Rivera said. “It kind of suits what we’re doing once we get into the red zone.”

Washington running back Antonio Gibson, a receiver in college, leads all rookies with eight rushing touchdowns. Ezekiel Elliott has five TDs and 645 yards in 10 games for Dallas, though Young still has plenty of praise for the two-time rushing champion.

“Zeke’s an elusive back, he runs with low pads and he has explosive speed,” said Young, who entered the NFL four years behind Elliott out of Ohio State. “He’s everything you’d want in a back.”

Gibson is still learning the intricacies of the position and feels as if he’s getting more comfortable with each carry. One thing he has figured out is how to score, and the Memphis product has become Washington’s go-to guy at the goal line.

McCarthy borrowed a bit from the comedian Gallagher to try to motivate the Cowboys last weekend by taking a sledgehammer to watermelons in a team meeting the night before the season-saving win over the Vikings.

“We had to actually take our own watermelons with us because it’s a little harder to find big watermelons in Minneapolis this time of year than Dallas, from what I was told.” McCarthy said. “So a lot of planning goes into that and most importantly we were able to get it done right and the cleanup was efficient. The hotel was a little concerned there.”

And then there was the matter of taking a sledgehammer on a plane.

Owner Jerry Jones didn't see the stunt, but heard plenty about it.

“I thought coach’s line was great before the game when he said I just had forgotten how much water is in a watermelon,” Jones said. “And we both laughed at that statement when we thought about it. Well, hell, there’s got to be a lot of water in a watermelon.”

It’s the 10th Thanksgiving meeting between Dallas and Washington, the most frequent opponent for the Cowboys on a holiday game they’ve hosted 52 of the past 54 years. Dallas won eight of the first nine meetings.

Cowboys strength and conditioning coordinator Markus Paul died Wednesday, a day after experiencing a medical emergency at the team's facility. The 54-year-old Paul was in his third year with the team. The Cowboys canceled practice Tuesday after Paul, a former NFL defensive back, was taken to the hospital. Paul and Washington coach Ron Rivera were teammates with the Chicago Bears. The Cowboys said the cause of death was pending.