Snowboarding an Italian job for Vito at Beijing Olympics 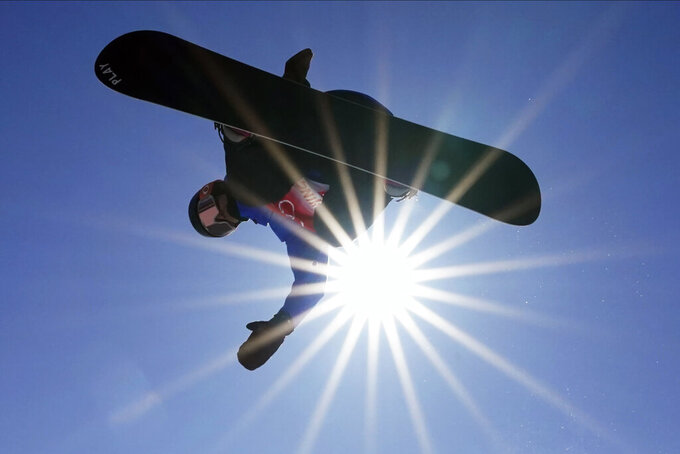 ZHANGJIAKOU, China (AP) — By no means does Ohio-born snowboarder Louie Vito consider himself fluent in Italian. But he's steadily learning the language and even getting familiar with his new country’s national anthem.

You know, just in case. Even long shots can dream a little.

For years, Vito, who parlayed his halfpipe career into one of a part-time celebrity, has represented the red, white and blue of Team USA.

For Beijing, he’s switching to the green, white, and red of Italy as he returns to the Olympic arena for the first time since taking fifth on the halfpipe at the 2010 Vancouver Games.

More than medals this time it's about honoring the heritage of his Italian grandparents.

“This means a lot to me ... and something that I’m not just dipping one foot in,” the 33-year-old Vito said in a recent interview with The Associated Press. “I’m all in.”

For a time, Vito was one of the top riders and a rival to Shaun White who grabbed his share of the spotlight with his charismatic personality.

Most famously, Vito showed off his foxtrot, tango and salsa moves on “Dancing with the Stars,” where he appeared on Season 9 of the show. He also was on MTV's “The Challenge," appeared in ESPN’s “The Body” issue and had a cameo role in the 2015 remake of “Point Break.”

Not bad for a kid who grew up in Bellefontaine, Ohio, and learned snowboarding with his father on a hill near his house that had a 300-foot vertical drop. He quickly went from simply trying to get down the mountain to standing at the top of podiums.

Vito blossomed into a multiple Winter X Games medalist, two-time Dew Tour champion and four-time U.S. Grand Prix overall winner. He was once named among Men’s Health’s “Top 50 most fit athletes in the world” and earned the label of “U.S. Most Awesome Athlete” at the Young Hollywood Award.

All the while representing the Stars and Stripes.

In the back of his mind, though, Vito always envisioned representing Italy to honor his family's heritage. So he started the paperwork, and in the process of receiving Italian citizenship, he learned a few compelling details about his family’s history.

Such as how his great-grandfather was a stowaway on his way to America. Or how his last name might have originally been “Viti” only to have it written down incorrectly. Or seeing pictures of the boat his grandmother and her family arrived on.

"It’s frustrating and there are headaches getting all the paperwork you need and all the hoops you have to jump through. But learning more and more and more about your family that is hard to learn about when you know those relatives have passed away, that was pretty cool,” said Vito, who doesn’t take funding from the Italian national team. “It's a dream come true for me to still be able to do contests and kind of ride how I want to and just have a different flag next to my name.”

It's hardly unheard-of for athletes to compete for a country not their own, often using a parent or grandparent's homeland as a way to gain citizenship. Freestyle skier Gus Kenworthy is competing for Britain this year after two Olympic trips with the United States. Another freestyler, Eileen Gu, is from San Francisco but will compete for host country China. For Vito, this is a chance to honor family — and an easier route to the Games than competing for a spot on the U.S. team.

“I’ve been doing this for so long, kept my head down and always have grinded through everything — through ups and downs and injuries and what-not. But this is way bigger than snowboarding," said Vito, who begins qualifying on Wednesday.

He knows his late grandmother would be proud. She used to call him “Luigi” and one of her proudest moments was watching him graduate from high school. Soon after, she passed away.

He knows this Olympic appearance, wearing the colors of Italy, would mean a great deal to her. To his whole family, in fact. His father recently received his Italian citizenship and his sister has started the process.

Next task: Inspire the next generation of Italian halfpipe riders. He's always been known for his innovative style, and he was on the front end of the double-cork craze that is now the price of admission for a podium in top contests.

“I’ve always said you want to leave it better than you found it,” said Vito, who holds the “ Louie Vito Rail Jam ” in his hometown at Mad River Mountain to help mentor young riders. “So it's how can I take what I’ve done in my career and the legacy that I’ve built over here and really help the next generation? Because at the end of the day, you want snowboarding to grow all around the world."