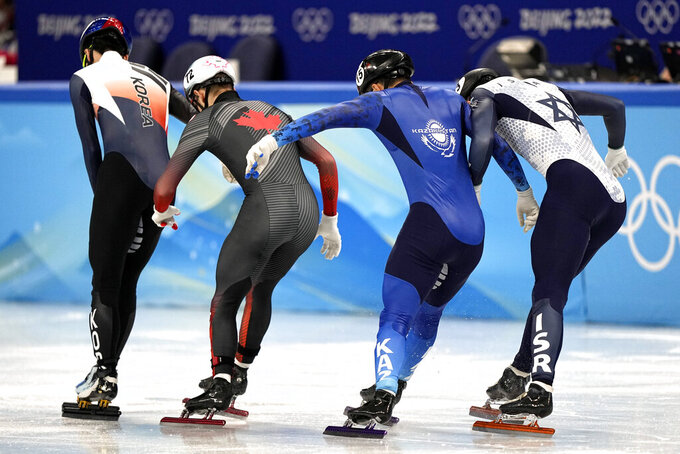 BEIJING (AP) — Angered by the disqualifications of two of its short track speedskaters at the Beijing Games, South Korea filed complaints with the International Skating Union and International Olympic Committee on Tuesday.

World record holder Hwang Daeheon and Lee Juneseo were disqualified in the semifinals of the men's 1,000 meters a night earlier.

Yoon Hong Geun, chef de mission for South Korea, said an appeal also will be filed with the Court of Arbitration for Sport.

“We hope that such things will never ever happen again in the future,” Yoon said at a news conference.

Immediately after the semifinals, the Koreans filed a protest with the referee asking for the reason why Hwang and Lee were DQ'd. The complaint was then filed to the ISU.

“The decision on the field of play will not be altered according to the sport’s rules,” said Choi Yong Koo, support team leader for South Korea. “We are very clear on that, but are instead asking that such unfair penalties will be prevented from happening again. We are planning to protest more fiercely.”

Choi noted that in the video replay of the 1,000 A final, Ren Ziwei of China appeared to have his hands on the leg of Liu Shaolin Sandor of Hungary, who crossed the finish line first, fell and spun into the pads.

Liu was penalized twice and earned a yellow card. That elevated Ren, who crossed second, to the gold medal.

“We can’t understand why the Hungarian athlete got a penalty,” Choi said. "The ISU has been refining the judgment system every year, but the right to make the final decision goes to the chief referee. We have to rely on his fair judgement.”

South Korea coach Lee So Hee added, "As you can see in the video replay, our athletes didn’t touch other athletes but still got many penalties.”

South Korea is a hotbed for short track and its fans are passionate about the sport.

Yoon said fans have reached out to the Korean Olympic Committee and on social media urging the team to return home.

“We had so many phone calls coming in that we couldn’t sleep,” Yoon said. "But for the sake of all the efforts made by our athletes and related staff to come to Beijing, and because we have many races left in the remaining days, we decide to stay and finish the Games. Meanwhile, we will do whatever we can to protest against the penalties.”