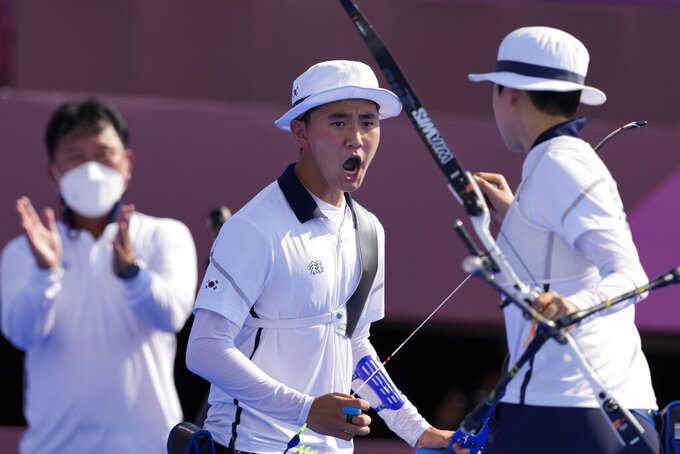 TOKYO (AP) — The tandem showed poise beyond their years. Accuracy, too. They’re simply part of the next youthful wave helping keep Olympic archery gold medals in the possession of South Korea.

Teenager Kim Je Deok and 20-year-old An San handled the intense pressure as they paired up to win the Olympic debut of archery’s mixed team event at the Tokyo Games.

On a sizzling Saturday at the Yumenoshima Park Archery Field, they held off Gabriela Schloesser and Steve Wijler of the Netherlands by a tally of 5-3 to bring home yet another archery gold for South Korea. The country has now captured 14 of 17 gold medals in archery team competitions since the current format was introduced to the Olympics in 1988.

Needing just a “9” from 70 meters, An pulled back the string, let the arrow go and nailed the mark to clinch the match.

“There still was pressure," An insisted. "But we did our best. After this Olympics, we’re not sure if we’re selected for the next Olympic Games.”

That’s just how competitive it is to make the South Korean archery team. Even gold medals don’t even come with guarantees.

Before the match, Kim had a dream about snakes. He didn’t elaborate on what he thought it meant, only that he paid more attention to a follow-up dream: A gold medal.

“The mixed team faced mental pressure,” Kim said. "It was a matter of confidence.”

Especially after dropping the first set. Their coach had some advice for them — stay steady. They listened, too.

“We were a little bit hesitant because we were too ambitious,” Kim said. “He said, ’Don’t be too greedy. Just focus on what we’ve been doing.'”

They stormed back, closing out the match with two “10s” from Kim in the final set and another from An.

It was the 24th Olympic gold medal for South Korea’s archery program, matching short track speed skating for most by the country in a particular sport.

In the bronze-medal match, Alejandra Valencia and Luis Alvarez combined for Mexico and knocked off Yasemin Anagoz and Mete Gazoz of Turkey.

For that, they credited constant communication.

“We don’t keep anything for ourselves. We communicate everything we feel, everything we’re thinking," Valencia said. "We tried to be happy and enjoy the fact we’re here — the fact we made it all the way here.”

To capture silver and also see Mexico on the podium felt like a double victory, Schloesser said. She began representing Netherlands a few years ago. She competed for Mexico in the women’s individual event at the 2016 Rio de Janeiro Games.

The American team of Mackenzie Brown and Brady Ellison was eliminated in the first round by Indonesia.

The future of archery is certainly bright for South Korea, with An and Kim so young. They posted the highest qualifying scores in the ranking round the day before, with An setting an Olympic record.

The matches in the mixed team event are decided by a set system. Each set consists of four arrows and the team with the best score earns two points (they split a point on ties). The first team to achieve five set points wins the match.

South Korea beat Bangladesh, India and Mexico on its way to the final. Netherlands advanced by getting by Italy, France and Turkey.