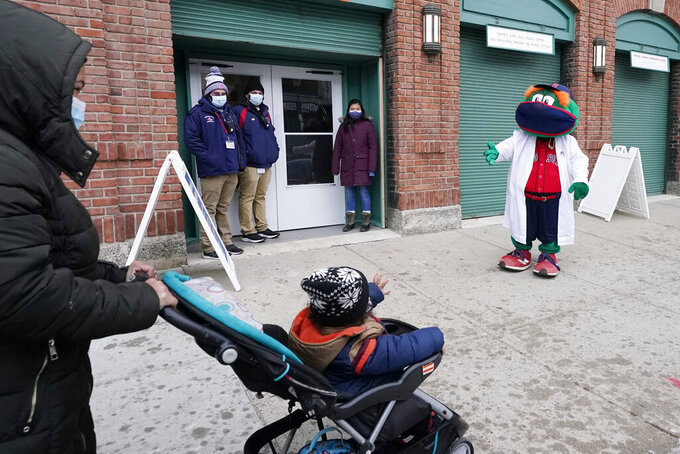 BOSTON (AP) — The state’s total confirmed COVID-19 caseload since the beginning of the pandemic surpassed 500,000 on Monday even as other statistics appeared to show a continued easing of the disease following a post-holiday spike.

The state crossed the half-million case mark exactly a year after officials reported the first case of the coronavirus in Massachusetts in a Boston resident who had traveled to the Chinese city of Wuhan.

The number of newly confirmed coronavirus deaths in Massachusetts rose by 30 on Monday, pushing the state’s confirmed COVID-19 death toll to 14,317 since the start of the pandemic.

The number of newly confirmed cases of COVID-19 increased by more than 2,200.

There were fewer than 1,700 people reported hospitalized Monday because of confirmed cases of COVID-19, with more than 370 in intensive care units.

The average age of those hospitalized was 70. There were an estimated nearly 72,000 people with current active cases of COVID-19 in the state.

The number of probable or confirmed COVID-19 deaths reported in long-term care facilities rose to 8,086.

The second phase of Massachusetts' coronavirus vaccine rollout Monday is being disrupted by a winter storm that is causing schedule changes and at least one vaccination location shutdown.

The Reggie Lewis Center in Boston's Roxbury neighborhood, which was supposed to open Monday as a mass vaccination site for residents age 75 and over, will not open because of the storm, the Boston Public Health Commission announced.

Appointments that were scheduled for Monday will automatically be rescheduled for Feb. 8, the agency said in a tweet.

Mass vaccination sites at Gillette Stadium and Fenway Park are open, but with some changes, according to CIC Health, which is operating both sites.

The Gillette Stadium site opened, but anyone with an appointment scheduled after 3 p.m. will receive an email to reschedule for later this week.

“The big goal for the mass vaccination sites is going to be to try to get as many of the folks who are scheduled today through,” the Republican said at a press conference Monday,

Baker said that the state should also have more information later this week about a hotline his administration is setting up to help people — many of them older — who may need help scheduling an appointment and are having trouble navigating the state's vaccine map website.

Civil rights and Latino community groups in Massachusetts are calling for equity in how the COVID-19 vaccine is distributed as the state begins the second phase of its rollout Monday.

Lawyers for Civil Rights and the Greater Boston Latino Network said Monday they’ve sent a letter to Gov. Charlie Baker’s office and state public health agencies to call for the state to increase the number of vaccine sites in communities of color.

The organizations say the state should prioritize communities that have the densest populations and have been the most severely affected by the pandemic.

They note in their letter that cities with the largest population of Black and Latinx communities suffer higher COVID-19 infection rates and death in Massachusetts, according to a recent study from Harvard University and Beth Israel Deaconess Medical Center.

The organizations commended Baker for pledging to reserve 20% of the state’s vaccine supply for hard-hit communities but said the state needs to make good on that pledge by “ensuring vaccines are delivered and administered directly in minority communities, and not merely set aside.”

Despite the governor’s pledge, they say there have already been stark disparities in vaccine access. Roughly 43% of those who are fully vaccinated are white residents, while less than 10% of Black, Latinx, and Asian residents combined are fully vaccinated, the organizations said.