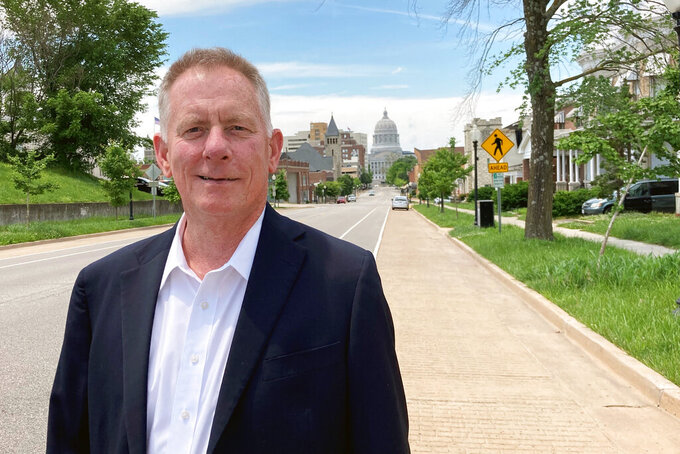 Dan Mehan, president and CEO of the Missouri Chamber of Commerce and Industry, stands outside the chamber's office near the state Capitol in Jefferson City, Missouri, on May 24, 2021. The chamber supported Gov. Mike Parson's decision to use $300 million of federal coronavirus relief funds to shore up the state's unemployment insurance trust fund. (AP Photo/David A. Lieb)

Businesses could be spared billions of dollars of higher taxes in coming years — potentially freeing up money to spend on employees or invest in their operations — as a result of federal coronavirus aid flowing to the states.

Governors and lawmakers in more than half the states are planning to use at least part of their federal pandemic relief money to bail out unemployment insurance trust funds that were drained by a surge in jobless claims caused by business closures and restrictions, according to an Associated Press review.

By tapping into the federal aid, states could avoid automatic tax hikes that otherwise would be imposed on businesses to repay federal loans that have kept state unemployment systems afloat during the COVID-19 pandemic. That means state jobless funds could recover much faster than they did after the Great Recession, when it took some states five to 10 years to replenish their funds.

“For the first time in decades, states will be able to come out of an economic contraction with well-funded unemployment compensation trust funds and be able to save for the next downturn, rather than focusing on paying off the debt from the last one,” said Jared Walczak, vice president of state projects at the Tax Foundation, a Washington, D.C.-based nonprofit.

Some worker advocates would prefer that states spend their pandemic funds on direct aid to those who have suffered economically during the coronavirus outbreak.

“Using the money to just replenish an account is not serving workers,” said Jenna Gerry, a senior staff attorney at the National Employment Law Project, a New York-based group that advocates for low-wage workers and the unemployed.

But business groups contend that employees ultimately will benefit if their bosses don't have to bear the tax burden of restocking state jobless funds.

“It impacts all aspects of that employer’s ability to employ people, to grow, to pay wages and benefits," said Dan Mehan, president and CEO of the Missouri Chamber of Commerce and Industry.

The federal government has provided several rounds of aid to states since the coronavirus pandemic began last year, culminating with $195 billion of flexible funds included in the American Rescue Plan signed by President Joe Biden. U.S. Treasury Department guidance allows the money to be used to replenish unemployment trust funds to their pre-pandemic levels.

At least 29 states already have transferred or proposed to use a total of more than $12 billion of federal coronavirus aid for their unemployment trust funds, according to an AP analysis. That ranges from a $25 million transfer in Wyoming to commitments of as much as $1.5 billion in Georgia in Ohio.

Hogan said the move would allow the state to “continue helping those who need it most” while also providing “tax relief for struggling businesses.”

State unemployment benefits are funded by special federal and state taxes on employers. Each state sets its own tax rate and benefit payment amounts. When trust funds run low, states can get federal loans to keep paying unemployment benefits. Loans taken out in 2020 and still on the books next January must be repaid by November 2022, or else the federal government will raise taxes on businesses to recoup the money.

A decade ago, the Great Recession led to the insolvency of unemployment trust funds in 35 states that collectively racked up more than $40 billion of debt to pay unemployed workers. It took years for states to repay that.

A U.S. Labor Department report warned shortly before the onset of the pandemic that 21 states still didn’t have sufficient reserves in their unemployment funds to weather a potential recession. Most of those states had to borrow from the federal government as pandemic-related layoffs provided a major hit to state unemployment funds.

In the year since March 2020, the total money in states' trust funds plummeted by two-thirds while the median state fund balance declined even more — from $1.1 billion to $250 million, according to an AP analysis.

But due partly to federal relief, fewer states have borrowed to pay unemployment benefits than during the last recession. As of Tuesday, 18 states owed the federal government $52 billion for unemployment loans. California topped the list, with almost $21 billion of unemployment debt, followed by more than $9 billion for New York and nearly $7 billion for Texas.

Missouri took five years to repay over $1 billion of federal unemployment loans after the recession that ended in 2009. But its unemployment fund has avoided insolvency during the pandemic because Republican Gov. Mike Parson shored it up with $300 million of aid provided under a law signed by former President Donald Trump.

Parson's office was lobbied to do so by the Missouri Chamber of Commerce and Industry.

“Had we not done something like that, those employers out there -- small, medium and large that are trying to come back, and come back strong -- would have had to pay the price in increased charges to their unemployment insurance,” said Mehan, the chamber CEO.

Pennsylvania just made its final payment in January 2020 on $2.8 billion of bonds issued to repay the federal government for unemployment compensation loans stemming from the Great Recession. A few months later, it had to start borrowing again because of the pandemic. The state now owes the federal government nearly $1.6 billion for unemployment loans.

“Lawmakers talk frequently about supporting their businesses and their small businesses. This is a good opportunity to put some action behind that,” said Alex Halper, government affairs director at the Pennsylvania Chamber of Business and Industry.

Among the states doing so is West Virginia, which has borrowed $185 million from the federal government to keep paying regular unemployment benefits. Republican Gov. Jim Justice has set aside around $600 million of federal pandemic relief money for the state's unemployment system.

“There’s a lot we could have done with that money over the past year, and there’s still a lot we could be doing with it -- $600 million is a lot of money to just be sitting on right now," he said.