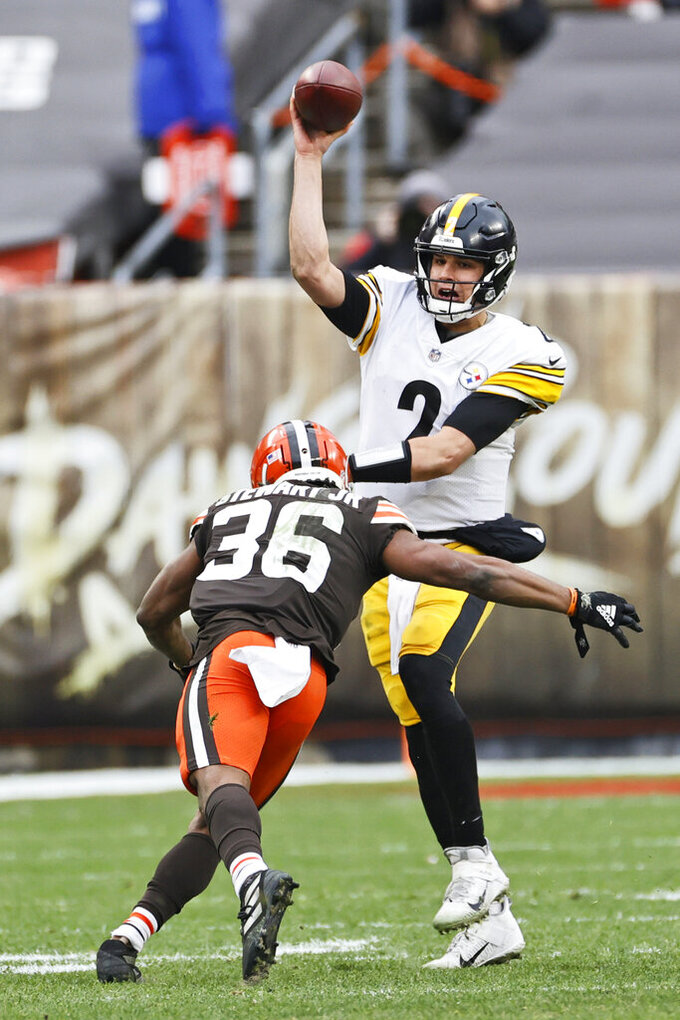 Mason Rudolph found closure, it seems, with Myles Garrett in his return to Cleveland. The Pittsburgh Steelers backup quarterback may have found a longer-term future in the NFL, too.

There was no brawl this time. No avalanche of mistakes. Nothing but four quarters of competent and occasionally dynamic play from Rudolph in a regular-season ending 24-22 loss to Garrett and the playoff-bound Browns.

And while a chance for the intentionally undermanned AFC North champions (12-4) to upend Cleveland's postseason hopes ended when Rudolph's 2-point conversion heave to Chase Claypool sailed high, Rudolph looked far more polished than he did the last time he stood on the turf at FirstEnergy Stadium.

Rudolph completed 22 of 39 passes for a career-high 313 yards with two touchdowns and an interception while nearly rallying the Steelers from a 15-point deficit. Perhaps just as important, he and Garrett exchanged brief pleasantries afterward, a significant step for both following their ugly fight last November that ended with Garrett slugging Rudolph with his own helmet.

“Myles came over and said good game, postgame and that’s all it was,” Rudolph said. “I told him good luck. A lot of respect for him.”

Garrett, who did not register a sack or a quarterback hit, credited Rudolph's resilience after the Steelers found themselves in a two-touchdown hole in the fourth quarter.

“He played tough,” Garrett said. “He had 300 yards and a couple of touchdowns. He played very well, and he kept them in it to the very end. Had to show a little praise that he did well in this game and he was able to make some big plays for them.”

Rudolph will return to his backup role when the Browns visit Heinz Field for the first round of the playoffs next Sunday night. Still, he pointed to the opportunity to fill in for Roethlisberger as a chance to show he can be a starter.

At times, Rudolph looked very much like a player who hadn't seen any consequential action in over a year. Save for some mop-up duty in a couple of blowouts, Rudolph hadn't played with anything on the line since a Week 16 loss to the New York Jets in December 2019.

Though he frequently takes reps with the first team on Wednesdays while Roethlisberger sits, Rudolph hadn't been hit in almost 13 months after the preseason was canceled due to the COVID-19 pandemic. Maybe that's why several times Rudolph patted the ball as he stood in the pocket thinking he had more time. He didn't.

Though the Browns only sacked Rudolph once, they occasionally made him look skittish when the protection deteriorated, a circumstance that led to a poorly underthrown pass intended for JuJu Smith-Schuster late in the third quarter that was picked off by MJ Stewart. The Browns scored on the ensuing possession to take a 24-9 lead.

Rudolph recovered quickly. He guided the Steelers to touchdowns on their final two possessions. The first ended with a pretty fourth-down throw that Claypool hauled in for a 28-yard touchdown. The second included a 47-yard heave to Diontae Johnson and a 2-yard dart to Smith-Schuster that drew Pittsburgh within two.

The Steelers had a chance to draw even, but Rudolph threw over and behind the 6-foot-4 Claypool.

“I’ve got to make a better throw on the 2-point play to send us into OT,” Rudolph said.

Still, he averaged 8.1 yards per attempt and finished with three completions of at least 40 yards, an important development for an offense that has struggled to get the ball downfield this season.

That doesn't mean Roethlisberger's job is in jeopardy. The two-time Super Bowl winner will start for as long as he plays. Yet Rudolph — who was wildly uneven while going 5-3 as a starter in 2019 after Roethlisberger went down with a right elbow injury in Week 2 — provided a glimpse of what one day could be.

“I thought his performance the whole game was great,” center J.C. Hassenauer said. “He led our team. He set the tempo. He was a leader.”

Tomlin stressed all week that his team — which played without Roethlisberger, outside linebacker T.J. Watt and defensive end Cam Heyward among a handful of regulars who stayed in Pittsburgh to rest for the postseason — would not roll over. The Steelers didn't, thanks in large part to Rudolph.

Roethlisberger is under contract through the 2021 season, when Rudolph's rookie deal also expires. Chances to state his case as Roethlisberger's potential successor could be rare. Still, Rudolph left a solid impression with one of the guys who will be heavily involved in that decision-making process, whenever it comes.

“At the quarterback position, there are not many opportunities," Tomlin said. "This was his first extended action of the 2020 football season so we anticipated him being better, and he was.”