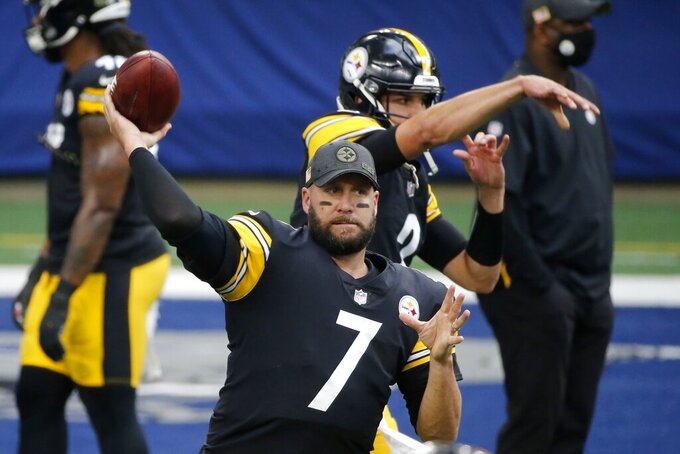 The unbeaten Pittsburgh Steelers wound up relatively healthy for their game against the AFC North rival Cincinnati Bengals following a brush with the novel coronavirus.

Quarterback Ben Roethlisberger and linebacker Vince Williams were available for the Steelers after spending most of the week in self-quarantine because of COVID-19 protocols after tight end Vance McDonald tested positive. Running back Jaylen Samuels and reserve offensive lineman Jerald Hawkins, who were also forced into self-quarantine, were also given the OK to play.

Defensive tackle Tyson Alualu is also back after missing a game with a knee injury. Cornerback Mike Hilton, however, was out for a fourth consecutive game because of a right shoulder injury.

Cincinnati is without running back Joe Mixon, whose lingering foot injury is forcing him to miss a third game in a row.

Arizona starting running back Kenyan Drake is back for the Cardinals against the Buffalo Bills after missing last week's game with an ankle injury and being listed as questionable. The Cardinals are also missing defensive lineman Jordan Phillips because of a hamstring injury.

Buffalo center Mitch Morse returns after missing a game with a concussion. Four Buffalo players have been placed on the COVID-19 reserve list and won’t play, including cornerback Josh Norman.

The Seattle Seahawks face the Los Angeles Rams without their two starting cornerbacks, their two top running backs and their starting center.

Seattle’s inactive decisions were no surprise ahead of the NFC West showdown. The division leaders will be without cornerbacks Shaquill Griffin and Quinton Dunbar, running backs Carlos Hyde and Chris Carson and center Ethan Pocic, who are all injured.

Los Angeles had much better injury news earlier in the week when rookie safety Jordan Fuller and veteran defensive lineman A’Shawn Robinson were cleared to play. Fuller is making his return from a shoulder injury, while Robinson is making his Rams debut.

Rams linebackers Terrell Lewis and Leonard Floyd also were active after being questionable to play. Receiver Cooper Kupp, left tackle Andrew Whitworth and running back Darrell Henderson all were active after missing practices with injuries.

The injury-ravaged San Francisco 49ers were able to activate a couple of reserve receivers who were listed as questionable at the end of the week for their game at the New Orleans Saints. Trent Taylor (back) and River Cracraft (quadriceps) were available to play for a Niners squad already missing a handful of prominent players, including quarterback Jimmy Garoppolo, tight end George Kittle, defensive end Nick Bosa and cornerback Richard Sherman.

The Saints are largely healthy, aside from third-string running back Dwyane Washington, who's out with a back injury.

Las Vegas Raiders left tackle Kolton Miller is out against the Denver Broncos, missing his second consecutive game with a sprained ankle. Receiver Jerry Jeudy (shoulder), tackle Demar Dotson (groin, hand) and cornerback Bryce Callahan (ankle) are all active for the Broncos after being listed as questionable.