Stefanski, Browns back at 'square one' after '20 turnaround 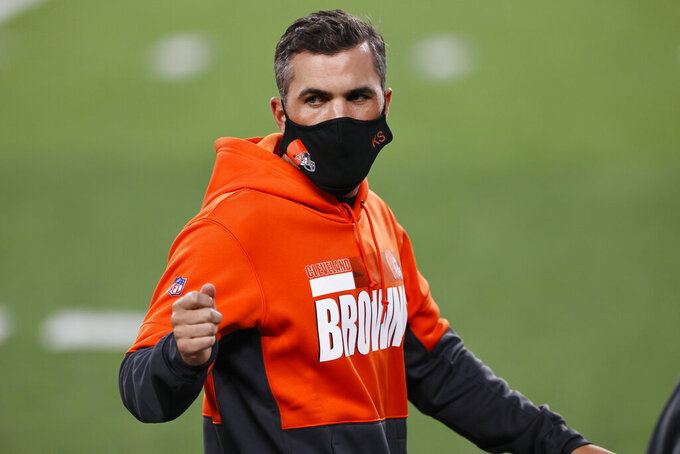 File-This Sept. 17, 2020, file photo shows Cleveland Browns head coach Kevin Stefanski before an NFL football game against the Cincinnati Bengals, in Cleveland. Stefanski's first season as an NFL coach was sublime, almost storybook. He ended Cleveland's long playoff drought, won a postseason game _ while watching from his basement as he recovered from COVID-19, and guided his team around endless obstacles in a global pandemic to almost the AFC championship. An unforgettable year, indeed. And as far as Stefanski's concerned, nothing to celebrate.(AP Photo/Ron Schwane, File)

He ended Cleveland's long playoff drought, won a postseason game — watching from his basement as he recovered from COVID-19 — and guided his team around endless obstacles in a global pandemic to almost make the AFC championship game.

An unforgettable year. And as far as Stefanski's concerned, it's over.

Stefanski, who was voted AP Coach of the Year for the Browns' turnaround in 2020, met with reporters Tuesday on Zoom for the first time since a day after the team's 22-17 divisional-round playoff loss at Kansas City.

As is his style, Stefanski offered no juicy news nuggets about the Browns' offseason plans. However, he did make it clear that he's not settling on last season's success. He won't be satisfied with an 11-5 record or the team's first taste of the playoffs in nearly two decades.

“We laid a foundation, but it is really, really important that everyone in this building, all of our players, understand we have to get better,” he said. “To say we are just going to be right back where we left off, that is not the case. It just does not happen that way. Have got to work at it.”

Stefanski is excited about bringing his entire staff back for Year 2, and said he expects everyone — himself included — to take a step forward in '21.

"My focus, our focus as a staff, as a team, is we have to get better,” he said. “We have to, as coaches, really pull this thing apart and find ways to improve schematically. We have to evolve and I think that has been a big part of our process to date.

“Also, as coaches we have to get better. I have to be a better coach next year for this team and that is my goal. We are working really hard to find different ways for each of us to get better.”

Stefanski wouldn't comment on the Browns' interest in free agent defensive end J.J. Watt, who surprisingly signed a two-year contract with the Arizona Cardinals on Monday. Cleveland was believed to be among the teams on the star's short wish list.

With defensive end Olivier Vernon unlikely to return after suffering an Achilles tendon injury, the Browns are expected to address their defensive line in free agency later this month, and there could be some appealing pass rushers available.

Stefanski didn't want to rate this year's group, but hinted it will be an area of focus.

For the first time in years, the Browns seem settled at quarterback.

Baker Mayfield bounced back with a strong third season with Cleveland. After a slow start, Mayfield had a strong second half, throwing for more than 2,000 yards with 11 touchdowns and one interception in the final eight games.

The Browns are expected to pick up Mayfield's fifth-year contract option in the offseason, and may look to sign him to an extension.

NOTES: Stefanski said he's fully recovered from the coronavirus, saying his “smell and taste came back three weeks post-COVID-19, which was cause to celebrate.” ... Stefanski said star WR Odell Beckham Jr. ”is doing great" in his recovery from knee surgery. “As you can imagine, he is attacking this thing,” Stefanski said.