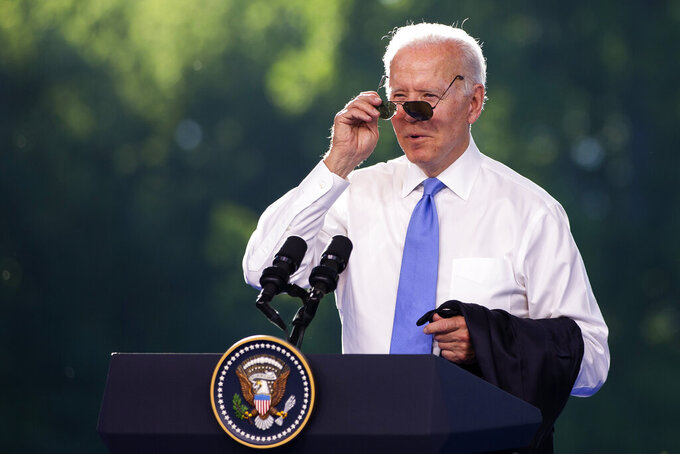 US president Joe Biden puts on his sunglasses at the end of his closing press conference during the US - Russia summit in Geneva, Switzerland, Wednesday, June 16, 2021. (Peter Klaunzer/Keystone via AP, Pool)

WASHINGTON (AP) — Speaking near the steamy banks of a shimmering lake in Switzerland, one president nonchalantly removed his jacket and spoke confidently about standing up to an adversary. The other held court in a bland, air-conditioned room where he sought to portray strength amid scrutiny of human rights abuses.

By abandoning the traditional joint press conference in favor of separate events, U.S. President Joe Biden and Russian President Vladimir Putin accomplished important objectives following their summit on Wednesday. Biden was able to privately air objections with the Russian leader while preventing a scene in which he and Putin found themselves on equal footing. And Putin, at least for a few hours, captured much of the world's attention.

Their back-to-back press conferences were an opportunity for both men to make policy commitments on issues including nuclear weapons. But the settings of the events, the side tangents the leaders indulged and the questions that inflamed their tempers also revealed how Biden and Putin see their roles and vulnerabilities. At times, they were both fatalistic in their assessments of the U.S.-Russian relationship.

“Look, this is not about trust,” Biden said. “This is about self-interest.”

Putin was especially glum when asked about the prospect of a new bond with the U.S.

“Let me tell you in life there is no happiness," he said. “There’s only a mirage on the horizon, so we’ll cherish that.”

Wednesday marked the first formal summit between Putin and an American president since 2018. At that meeting in Helsinki, then-President Donald Trump shocked leaders in Washington and around the globe by siding with Putin over his own intelligence agencies on the issue of Russian interference in the 2016 presidential election.

Biden's team pushed for stagecraft, including the separate news conferences, that would avoid any repeat scenes of chumminess with the Russian leader and drive home the point that the two countries have many differences to work through.

The summit concluded the first overseas trip of Biden's presidency, which has been dominated thus far by a pandemic that has dramatically disrupted global travel. But the president's news conference reinforced his administration's message that Americans can return to some degree of normalcy after vaccinations have helped dent coronavirus infections.

Many of the reporters at the outdoor news conference were maskless and were allowed to gather in ways that would have been impossible just months ago. Journalists at the indoor Putin news conference, meanwhile, mostly wore masks and observed social distancing.

The Russian leader went first and opted against delivering opening remarks, moving immediately to questions from reporters. He said there was no hostility during his meeting with Biden.

Putin fielded questions from more than a dozen reporters, including several from Western outlets. His face was largely expressionless as he listened to questions, rarely betraying any anger or frustration at confrontational queries. Instead, he adopted a what-aboutism stance that attempted to deflect criticism of his country and focus instead on the U.S.

When Rachel Scott of ABC News asked Putin why so many of his opponents end up in jail and pressed on what he is “so afraid of,” the president responded by seemingly comparing Russian dissidents to American protesters who demonstrated last year in favor of racial justice.

“What we saw, mass violations of the law and so on and so forth, we sympathize with the Americans but we do not wish that this type of thing could happen on our territory,” he said. “We will do our utmost to prevent it.”

Putin also pointed to gun violence in the U.S. and sought to dismiss concerns about human rights abuses in Russia by noting that the Americans still have the military detention camp at Guantanamo Bay, Cuba.

“It doesn’t come under any kind of law, international, American, nothing,” Putin said. “But it still exists.”

Putin repeatedly said the next question would be his last, only to keep taking additional inquiries, including one from a reporter who invoked her 9-year-old daughter in asking the Russian leader why he was so tough on protesters.

Amid the exchanges, he found ways to weave in some flattery of Biden, who he described as a “very experienced politician.” That was an apparent contrast to Trump, who entered the White House with no political experience. And in a nod to Biden's famous devotion to his family, Putin noted that the American president spoke of his mother during their private session.

Biden said he watched Putin's performance while he waited for his turn. After striding onto a stage with a picturesque view of Lake Geneva, he spoke about half as long and mostly took questions from a pre-selected group of reporters, none of whom represented Russian media, which is often viewed as aligned with the Kremlin.

The American president had a particularly sharp exchange with CNN's Kaitlan Collins over whether he thought Putin would actually change his approach after their meeting. Biden later apologized to Collins.

Still, in going second, Biden had the final say and the opportunity to respond to some of Putin's comments. He called Putin's comparison of Black Lives Matter protesters to the crackdown on democracy activists in Russia “ridiculous.”

More generally, Biden said he brought his relatable style of politics into the meeting with Putin, describing his approach as “somewhat colloquial.”

“You know how I am,” he said. “I explained things on a personal basis.”