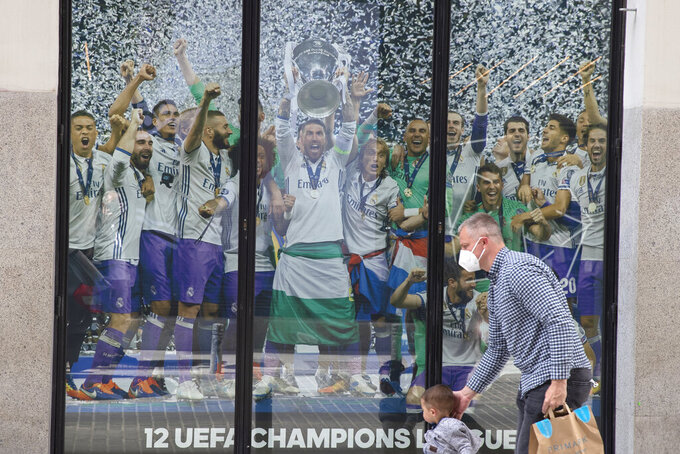 A man and a young boy walk past a Real Madrid poster of the team celebrating in a merchandising shop in Madrid, Spain, Monday, April 19, 2021. UEFA president Aleksander Ceferin says players at the 12 clubs setting up their own Super League could be banned from this year's European Championship and next year's World Cup. Ceferin spoke after a UEFA executive committee meeting held only hours of the English, Italian and Spanish clubs announced the project that threatens to split European soccer. (AP Photo/Paul White)

MADRID (AP) — The Super League is far from dead and its clubs have not given up on the idea of the breakaway competition despite having to shelve the project just a few days after it was announced, Real Madrid president Florentino Pérez said on Thursday.

Pérez, who would have been the new league's founding chairman, said the clubs behind the Super League will continue working on a way to make the competition work, even if changes have to be made to its format.

He said the Super League is on “standby” and the group is open to discussing ideas with European soccer's governing body and other entities to help the game amid the coronavirus pandemic. Pérez said he was certain that a “very similar” competition would soon be created.

“We are going to keep working,” Pérez told Spanish radio network SER in an interview after midnight local time. “We are looking for ways of getting this done. It would be a shame not to get it done.”

The Super League was announced on Sunday but essentially folded after the English clubs involved in the project pulled out Tuesday amid escalating backlash from their supporters and warnings from the British government that legislation could be introduced to thwart them.

On Wednesday, Atlético Madrid and the three Italian clubs in the project — Juventus, AC Milan and Inter Milan — also opted out. That left Real Madrid and Barcelona as the only clubs still officially in the new league.

Pérez said no one was really leaving, though.

“They haven't left,” the Madrid president said. “We are all still together, thinking of ways of making this happen.”

Pérez admitted that they should have explained the project better, and said he was "sad and disappointed" with the “avalanche of aggressive" and “orchestrated” criticism that surfaced everywhere.

“Each president was prepared to speak, but then the next day we got killed,” Pérez said. "We weren't expecting it. It was like we had launched an atomic bomb. It looked like that they already knew about it and were waiting for us.”

While some Premier League clubs apologized to their fans while pulling back on Tuesday, the teams which dropped out on Wednesday admitted defeat but tried to show they still believe in the project.

“While Juventus remains convinced of the soundness of the project’s sport, commercial and legal premises, it believes that at present there are limited chances that the project be completed in the form originally conceived,” the Italian club said. “Juventus remains committed to pursuing the creation of long-term value for the Company and the entire football industry.”

AC Milan said the “voices and the concerns of fans around the world have clearly been expressed,” but the club “will continue to work hard to deliver a sustainable model” for soccer.

“We accepted the invitation to participate in the Super League project with the genuine intention to deliver the best possible European competition for football fans around the world and in the best interest of the club and our own fans,” the Italian club said. “Change is not always easy, but evolution is necessary for progress, and the structures of European football have evolved and changed over the decades.”

Inter Milan said it was committed to delivering the best soccer experience for fans because “innovation and inclusion have been part of our DNA since our foundation.”

“Our commitment with all stakeholders to improve the football industry will never change,” Inter said in a statement. “Inter believe that football, like any sector of activity, must have an interest in constantly improving its competitions in order to continue to excite fans of all ages all over the world, within a framework of financial sustainability.”

“When a movement like this happens, things end up changing, I have no doubt,” Simeone said. “All sides will have to eventually reach an agreement.”

Barcelona was the only team yet to comment, though its presence was always dependent on a vote by its general assembly.

There was some internal pressure on the Catalan club, however, after outspoken captain Gerard Piqué made his view clear.

“Football belongs to the fans. Today more than ever,” he wrote on Twitter early Wednesday.

There were protests against the Super League during Wednesday's Spanish league matches, with players entering the field wearing T-shirts condemning the new competition.

On Monday, UEFA threatened to ban players from the participating teams from playing in this year's European Championship and next year’s World Cup. A Madrid court later issued a preliminary ruling stopping UEFA, FIFA and its members from acting against the creation of the new league.

The Super League was intended to be a 20-team competition with 15 founding members guaranteed a spot every season and five other teams rotating in and out. The lack of relegation for the founding members raised concerns about the consequences for smaller clubs in the domestic leagues around the continent.

Pérez said the group was ready to discuss changes.

“We will keep working and talking to everyone,” he said. “We are open to whatever is best for soccer.”