Swiss special as Valenzuela returns to Olympics with brother 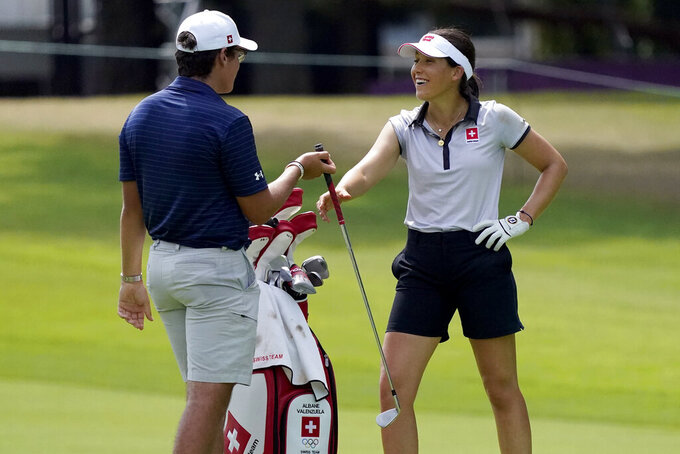 Albane Valenzuela, of Switzerland, laughs with her brother and caddy, Alexis Valenzuela, on the 11th fairway during a practice round prior to the women's golf event at the 2020 Summer Olympics, Monday, Aug. 2, 2021, at the Kasumigaseki Country Club in Kawagoe, Japan. (AP Photo/Matt York)

KAWAGOE, Japan (AP) — Clouds began to gather Monday over Kasumigaseki Country Club, and the matching Swiss smiles of Albane Valenzuela and her brother, Alexis, could not have been brighter. This is their Olympic moment that nothing can spoil.

It's why Valenzuela, a Phi Beta Kappa at Stanford, gave up her last semester of college golf. Turning pro was her best chance to get back to the Olympics, this time with her 19-year-old brother as her caddie. He is more than a brother.

“He is our miracle,” she said.

Alexis was 3 when he was diagnosed with an autism spectrum disorder. He didn't speak the first five years of his life — doctors said he might never speak — and the family was told he probably would never be able to attend school.

He now speaks three languages. After the Olympics, he returns to Dallas to get ready for his second year at SMU, where he played one tournament as a freshman on the golf team.

Is he a miracle? Alexis pondered this while holding an umbrella for his sister.

“I think I'm grateful every day to do what I do,” he said. “In life, I always try to be happy. I don't know if I'm a miracle for some reason. I'm just trying to be happy. I try to enjoy every moment.”

His inspiration is so powerful that Albane wrote about him for her college entrance essay, mainly the influence he has had on her.

“How he shaped me to become a mature person aware of life's realities,” she said. “Growing up with someone with autism gives you different perspectives and insights into life.”

The Valenzuela family is unique in so many ways, with golf at the core.

She is the daughter of a Mexican father and a French mother, a resident of three international cities before she was a teenager.

Alberto Valenzuela played college golf at UCLA and was a French Amateur champion playing an exhibition at Evian Golf Resort in 1991 when he met his wife, Diane.

They lived in New York when their daughter was born, moved to Mexico City when Albane was 3 and to Geneva three years later. She became a Swiss citizen at age 14 and played under the Swiss flag throughout her amateur career.

She is fluent in French, English and Spanish, capable in German.

Her mother once told Golfweek magazine: "If she’s in Mexico, she will feel Mexican. If she’s in Paris, she will feel a bit French. When she’s in the States, she loves being American, and she likes to represent Switzerland when she’s playing. She’s a part of the world, you know.”

No sporting event is more global than the Olympics, and it means the world to Valenzuela.

The timing couldn't have worked out better for her debut in Rio de Janeiro in 2016. She took a gap year before Stanford to play wherever she could. Valenzuela had a pair of top-five finishes on the Ladies European tour and made the cut in the U.S. Women's Open. That was enough for her to qualify for the Olympics as an amateur. She tied for 21st, an experience of a lifetime.

Alexis was supposed to caddie for her until they discovered in the weeks leading up to Rio that he was too young. He walked outside the ropes that week, happy as always. He kept a rubber bracelet from the Rio Olympics until Tokyo was set.

He also caddied for her in the 2017 U.S. Women's Amateur, a pivotal moment in life, and not just because big sister reached the championship match in San Diego.

Approached by a reporter about his autism, the boy who couldn't speak until he was 5 decided it was time to talk about it.

“I think at that moment I thought, 'Maybe it's time.' Maybe I should see how people react to it," Alexis said. “I decided to give it a shot. I could see the response was very open, everyone was very supportive. That was totally opposite the outcome I thought it would be. I thought people might judge me more, give me the side-eye. ‘He’s got autism.' They all thought it was a strength, not a weakness.

“I thought if everyone is like this," he added, "I should so something.”

And so he did.

He launched a charity called “Alexis for Autism,” in which he organizes golf tournaments to raise funds for autism research.

The first one in Geneva brought in nearly $350,000. The COVID-19 pandemic slowed his efforts since then. His next goal is to raise money for people still struggling from Hurricane Dorian in the Bahamas, where he went to high school. Their parents now live on Nassau, his father working in wealth management.

“Alexis, he's our alpha boy,” the father said. “There's no more star than my son. A golfer who was autistic, now raising money and giving hope to a lot of people.”

The siblings are inseparable. Valenzuela had her brother caddie for him at the Women's PGA Championship and through the summer before he returns to SMU.

It hasn't been smooth sailing for her. Valenzuela struggled through her rookie season — already interrupted by the pandemic — with a shoulder injury.

Her brother had an emergency appendectomy in October. Then, she had her appendix removed in November. Two months later, she tested positive for the coronavirus. That was about the time their mother had a tumor removed that was close to the eye nerve.

The family knows a little about adversity.

“Life throws bad stuff at you,” Valenzuela said. “You have to overcome it and move forward.”

It can make golf feel trivial, though that's important to Valenzuela, too.

She has her degree in political science and spent a few months during the pandemic working as a personal assistant to the CEO and co-founder of Slync.io, a logistics software company and one of her sponsors.

“That world is always out there," she said. “Being a professional athlete is a once-in-a-lifetime opportunity. I'm 23 and I have my life ahead of me. I'm not in a hurry to work in the corporate world. I have the best job in the world.”

She's at the Olympics. She's with her brother. There's no place she'd rather be.