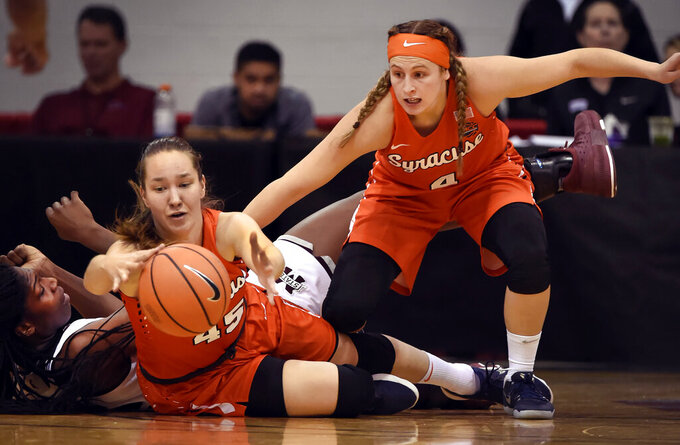 FILE — In this Dec. 21, 2017, file photo, Syracuse forward Digna Strautmane, center, and guard Tiana Mangakahia, right, chase the ball next to a Mississippi State player during the first half of an NCAA college basketball game, in Las Vegas. In spite of everything that's been thrown her way, the smile of Syracuse point guard Tiana Mangakahia and her effervescent persona remain as infectious as ever in the waning weeks of her final season in college. It's in her DNA. (AP Photo/David Becker, File)

In spite of everything that's been thrown her way, the smile of Syracuse point guard Tiana Mangakahia and her effervescent persona remain as infectious as ever in the waning weeks of her final season in college. It's in her DNA.

Text messages, social media posts, live interviews via Zoom, Twitter and the like have marked her remarkable journey back from breast cancer, sort of a season-long farewell that's touched the 25-year-old Australian star.

“I was on Instagram live and younger girls are commenting, ‘You’re such an inspiration.' It's so nice to know that,” Mangakahia said. “It just means so much to them. It's nice to know that I can give back to the community and give back to young girls that were there for me, messaging me, sending me letters when I was at the lowest point."

That was in June 2019 when Mangakahia was diagnosed with breast cancer. She missed the entire 2019-20 season after a bilateral mastectomy and several rounds of chemotherapy, but became a fixture on the bench as a coach of sorts.

A two-time Nancy Lieberman Award finalist as the top Division I point guard in the country, Mangakahia was granted a waiver by the NCAA to play an extra year and made her return in late November at Stony Brook. Her first competitive game in 615 days was a triumph — a game-high 16 points with seven rebounds and three assists.

“I don’t think there’s a scale for her toughness, because what she’s doing takes a lot of toughness, takes a lot of will,” Orange coach Quentin Hillsman said. “Honestly, it takes Tiana being able to deal with not playing as well all the time. That’s tough in itself. Her conditioning, it’s hard to say. I know that she’s going as hard as she can go. We’ve got to make her leave the gym after practice. She’s doing everything she can to do her best. As long as she’s doing that, I’m good with it.”

Despite several schedule disruptions caused by COVID-19, Mangakahia has missed only one game — with an injury — and has surged to the top of the national rankings in assists per game, averaging 7.7 (123) in 16 games. She's also averaging 31.3 minutes, second on the team, and still dreams of playing in the WNBA and the Olympics.

“If anyone has 600-plus days off and to come back and lead the country in assists, that’s an amazing feat. I don’t know what to say,” Hillsman said. “She’s just been Tiana. She’s been playing hard, she’s been giving it everything she has every minute she’s on the court. I think that ... this inconsistency of games probably hurts Tiana more than anybody else because she needs the games. She needs the time on the court, the time to practice, and we’re not doing a lot of that on a consistent basis, so I think it’s really affected her comeback, to be honest. But as far as what she means to the team and to the freshmen, she’s been what she’s always been, very steady and trying to lead our team by example and playing as hard as she can play."

After the coronavirus caused five cancellations early in the season, the Orange (11-6, 8-6 Atlantic Coast Conference), who started the year ranked No. 23, dropped out of the national rankings after two straight road losses, the first a 67-54 setback to then-No. 1 Louisville.

Makeup games crowded the schedule, giving the Orange two segments of four games in eight days. Not so easy a task for any player. Mangakahia responded to the challenge with four straight games with double-digit assist totals — 10, 13, 11, 10. She had 19 points, 11 assists and a season-high nine rebounds in a win over Notre Dame at the end of January, her third double-double of the season.

“It was difficult, I think, for a lot of us," said Mangakahia, whose heady play has helped 6-foot-7 freshman center Kamilla Cardoso, the Orange's leading shooter (60.6%) and scorer (15.4), adjust to the college game. “That’s not an excuse. We just have to keep pushing through."

Syracuse was supposed to host Louisville on Valentine's Day in one of the premier games during the Play4Kay campaign, but the Cardinals had to pull out because of COVID-19 problems. Syracuse now will celebrate the special day in the season finale Sunday against No. 2 North Carolina State in the Carrier Dome.

The game looms as a very poignant moment for Mangakahia, especially considering the opponent and the cause. Former North Carolina State head coach Kay Yow began a tradition in 2006 of dedicating a home game each season to raising awareness and money for women’s cancer. Both teams will don pink uniforms in honor of Yow, who lost her battle with Stage 4 breast cancer in 2009.

“A couple of years ago we wore pink and I just put it on. I didn’t really think about it," Mangakahia said. “This year I’m going to have a little pink in my hair and just raise more awareness for breast cancer cause I think ... not many people think about it before stepping onto the court.