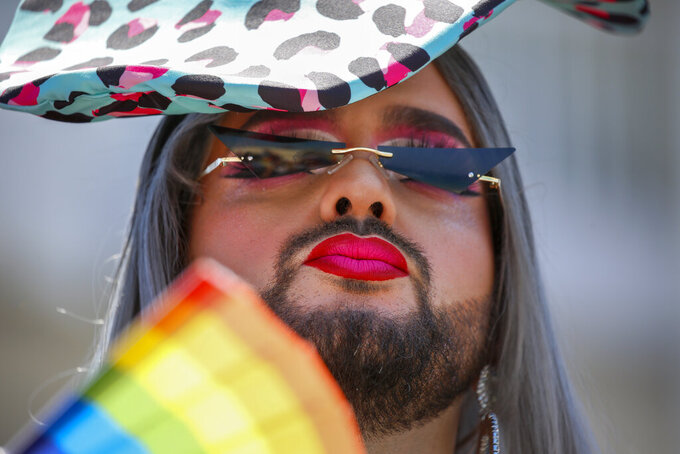 A participant pauses in the annual Pride Parade, in Tel Aviv, Israel, Friday, June 25, 2021. Thousands of people attended the parade Friday in one of the largest public gatherings held in Israel since the onset of the coronavirus pandemic. (AP Photo/Ariel Schalit)

TEL AVIV, Israel (AP) — Tens of thousands of people attended a Pride parade in Tel Aviv on Friday in one of the largest public gatherings in Israel since the onset of the coronavirus pandemic.

The vibrant parade and beach party are held on the seafront promenade in the Israeli city, a rare hub of gay culture in the conservative Middle East. Elsewhere in the region homosexuality is widely considered taboo and is outlawed in many countries.

Some 250,000 people attended the Tel Aviv parade honoring the LGBTQ community in 2019, before it was called off last year because of the pandemic.

Organizers estimated the turnout at Friday's event at 100,000, saying it's one of the largest worldwide since the pandemic struck.

“Pride events in Tel Aviv-Yafo are a long-standing tradition, centered on a message of equality, acceptance, and human and civil rights," Mayor Ron Huldai said. "This year, more than ever, we will celebrate together, march together, and fight together for equality.”

Israel fully reopened this spring after carrying out one of the world's most successful vaccination campaigns, but a recent outbreak driven by the more contagious delta variant has raised concerns.

Authorities are once again requiring people to wear masks in indoor public places starting Friday, and are advising mask-wearing at large outdoor events like the Pride celebrations.

Several marchers said they were sad to have missed the parade last year.

“It is not just a celebration, it is also a demonstration for our rights, for our existence, so it feels really good to be here again to march with everyone,” said Noam Klar.

Nina Korolev said it was the first time she attended a Pride parade.

“It is so delicious, it is amazing," she said. "I’m very proud that I can be here in a free country with free people together. All humans must have the same rights.”

Thousands of people marched through Jerusalem earlier this month in a much smaller Pride parade, celebrating LGBTQ rights in the conservative city amid heavy police security.

Police said they arrested a suspected attacker in Tel Aviv after tracking him ahead of the parade. The man in his 30s was found carrying nunchaku, an Asian martial arts weapon, as well as an electric shocker, chains and other “means of assault,” the police said.

The police later also said they arrested a husband and wife who assaulted police officers while trying to enter the parade area so they could heckle the event.

Support for gay rights is increasingly widespread in Israel, where gay people serve openly in the military and parliament. Yet they haven’t attained full equality.

Jewish ultra-Orthodox parties, which wield significant influence over matters of religion and state, oppose homosexuality as a violation of religious law.