Thanks to COVID, Spieth gets a longer break than he wanted 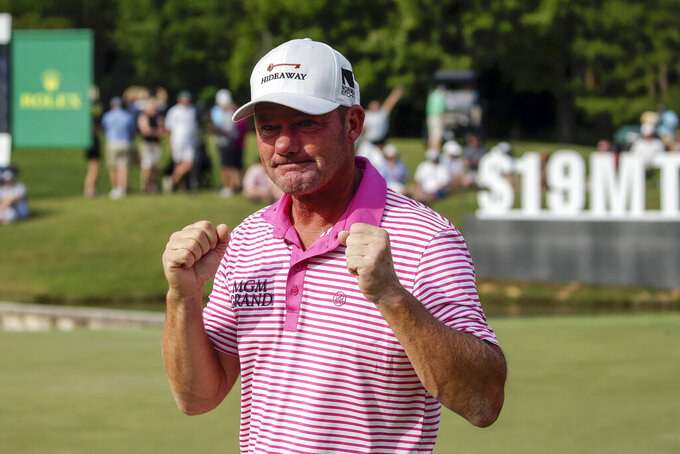 Alex Cejka, of Germany, reacts after defeating Steve Stricker on the first hole of a playoff after the final round of the Regions Tradition PGA Tour Champions golf tournament Sunday, May 9, 2021, in Hoover, Ala. (AP Photo/Butch Dill)

CHARLOTTE, N.C. (AP) — Jordan Spieth returns to competition after four weeks off following the Masters. That wasn’t the plan.

COVID-19 wasn’t part of the plan, either.

Spieth revealed Tuesday that he tested positive for the coronavirus the second week after the Masters, which is what kept him from playing the Valspar Championship at Innisbrook two weeks ago.

“I’ve only played a couple rounds and so I’m looking to maybe knock a little rust off that I didn’t think would necessarily be here,” Spieth said.

Spieth said no around him tested positive. It was Tuesday of the Zurich Classic (April 20) when he started to feel symptoms. He said it was bad for a day-and-a-half, “and then it was just kind of annoying for the next five days.”

He said the last week-and-a-half it’s as if nothing happened.

“Just kind of set me back a little,” he said. “I guess if there’s ever a good time during the season, it worked out OK. But I was planning on continuing to play. I wasn’t planning on taking a month off in the spring. So at this point, it’s get back to playing golf and try and get in the same rhythm I was in and just kind of being patient with it.”

He was in rhythm, all right. After going without a win for nearly four years, Spieth ran off four top 10s in six events before winning the Texas Open. He then tied for third in the Masters.

And now he’ll be playing plenty. The AT&T Byron Nelson is the first of four in a row for Spieth, and five out of six through the U.S. Open.

It sounds as though Hideki Matsuyama is going to decide on what to serve at the Masters Club dinner next April a lot sooner than Dustin Johnson did.

The Masters champions can count on some variety of sushi.

“Sushi does come to mind,” Matsuyama said Tuesday. “I'm a little worried. I don't know if everyone will really like sushi or not, but I’m going to check with some people and get their advice and what they think.”

For those who don't like sushi, Matsuyama mentioned that Japan has some of the best beef in the world.

“So I'm thinking about that and looking forward to it next year,” he said.

Matsuyama is playing the AT&T Byron Nelson this year, his first tournament since winning the Masters. His celebration was unlike any other Masters champion: He quarantined for two weeks upon arriving home.

That led to something he rarely does. Matsuyama had plenty of time on his hands to read.

“I was able to probably read every news article and newspaper and magazine and TV. And seeing how the Masters win was portrayed in Japan was great, really unforgettable, and that really stands out for my trip back to Japan,” he said.

He said it was the most he had ever read about himself.

“A bit embarrassing,” he said. “I’m not used to all that attention, but grateful that people took notice.”

The plan for Davis Love III was to play his way into shape for the PGA Championship and have his right hip replaced at the end of the month.

The first part of the equation became a problem.

Love was at the Insperity Invitational on the PGA Tour Champions and the pain became too much as he limped to a tie for 38th in a 36-hole event cut short by rain. He withdrew from the Wells Fargo Championship at Quail Hollow, where Love will be Presidents Cup captain next year, and pulled out of the PGA Championship.

“He just got wobbly out there, and he knew he couldn’t walk,” said his manager, Jimmy Johnston.

The British Open returns to Royal St. George's on the east side of England, and the R&A is holding out hope for what Martin Slumbers described as a “significant number of fans” in a reduced capacity model.

Slumbers, the chief executive of the R&A, posted an update Tuesday that noted increased optimism, along with caution, for the only major that was canceled last year. The Open is scheduled for July 15-18.

“Our absolute priority is to ensure we can stage The Open safely for all involved,” Slumber said.

Slumbers said the British government still has to decide on testing, vaccine certification and social distancing, all of which will influence what kind of crowd Royal St. George's can accommodate. In the meantime, he said the R&A is contacting those with tickets — refund information for those who can't make it, a request for patience for those hopeful of coming.

“Our end goal remains to stage a fantastic Open at Royal St. George’s and give our fans and players something to be genuinely thrilled about this summer,” he said.

Cristie Kerr has received a special exemption to the U.S. Women’s Open at Olympic Club, a year before the championship returns to the site of Kerr’s first major. She won at Pine Needles in 2007, and later added an LPGA Championship.

The Women’s Open is June 3-6 in San Francisco.

The 43-year-old Kerr is the second past champion to receive a Women’s Open exemption. The USGA previously awarded one to Paula Creamer, who won in 2010 at Oakmont. Kerr will be making her 24th consecutive start. Her last top 10 was at CordeValle in 2016.

“Winning the U.S. Women’s Open at Pine Needles was a career- and life-changing moment,” Kerr said.

KPS Capital Partners acquired TaylorMade in 2017. It announced it has sold the company to South Korean private equity firm Centroid Investment Partners. Financial terms were not disclosed, though it was believed to be $1.7 billion. ... Rory McIlroy moved to No. 6 in career earnings on the PGA Tour at just over $56.3 million. ... Martin Kaymer, Robert MacIntyre and Danny Willett are among 12 players who will compete in the British Masters at The Belfry before flying over for the PGA Championship at Kiawah Island. ... Alex Cejka was the seventh PGA Tour Champions rookie to win in the 2020-21 season.

The Wells Fargo Championship marked the 10th time Rory McIlroy has come from behind in the final round to win, the most of any player on the PGA Tour since 2010.

“If I'm a guy who's on my way to make history, like a Dustin (Johnson) or a few other top guys, I want to go after records, not a dollar.” — Webb Simpson.