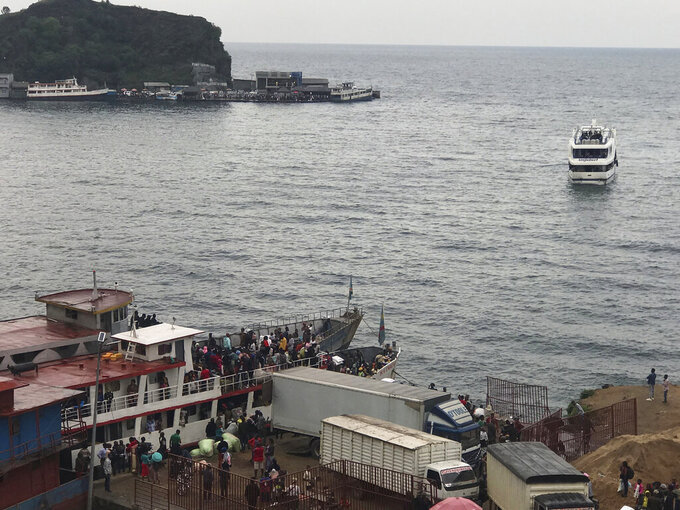 Residents leave Goma, Congo, by boat on Lake Kivu Thursday, May 27, 2021, five days after Mount Nyiragongo erupted. Evacuation orders were given for most of the town, fearing further eruptions and tremors. (AP Photo/Moses Sawasawa)

GOMA, Congo (AP) — Tens of thousands of people are fleeing the city of Goma in eastern Congo fearing another volcanic eruption by Mount Nyiragongo, which spewed lava near the city last week. Traffic was jammed and pedestrians streamed through the streets, desperate to escape the impending danger.

A new eruption could occur at any moment, the military governor of Congo’s North Kivu province, Lt. Gen. Constant Ndima Kongba, announced Thursday. He ordered the evacuation of 10 of the 18 neighborhoods in the city of nearly 2 million residents.

Full of fear, residents from many of the unlisted neighborhoods also fled after no warnings of Saturday’s eruption left so many in harm’s way.

The center of Goma, which was spared when the volcano erupted last week, is now under threat, with activity being reported near the urban area and Lake Kivu, Kongba said.

“Based on these scientific observations, we cannot currently rule out an eruption on land or under the lake. And this could happen with very little, or no, warning,” he said. An eruption under Lake Kivu could also have harmful consequences by leading to an explosion of gas in the lake, which could destroy parts of Goma and Gisenyi in neighboring Rwanda.

Residents were advised to carry very little and told not to return to their homes until advised by authorities. Authorities provided vehicles for the evacuations.

Many people were seen heading northwest toward the town of Sake and east toward Rwanda. International organizations such as the U.N. mission in Congo had on Wednesday already begun evacuating their staff.

Maguy Balume told The Associated Press by phone that she left her home with her two children and is heading for Sake.

“I am with my two children heading toward Sake, after leaving my home. My husband is on a mission in Kinshasa and I don’t know how I’m going to meet him,” she said. “I don’t think about my house because my family’s safety and health come first. I can build another house if I want to. I know that my God will save Goma.”

Mount Nyiragongo, one of the world’s most active volcanos, turned the dark sky fiery red Saturday night and then spewed torrents of lava into villages on the outskirts of Goma destroying more than 500 homes and resulting in the deaths of more than 32 people.

Scientists at the volcano observatory weren’t able to adequately warn the public of the eruption because of a funding cut, according to the scientific director of the Volcanic Observatory of Goma, Celestin Kasereka Mahinda.

A partnership between the government and the World Bank that had supported the observatory was cut in October 2020 because of the coronavirus pandemic, leaving the observatory without even internet, he said. The observatory had just started to resume operations last month thanks to new funding from the U.S. Geological Survey’s Volcano Disaster Assistance Program, which means the observatory can at least gather data after the eruption.

Data wasn’t needed for many who felt hundreds of aftershocks this past week that have left gigantic cracks in the ground and destroyed buildings. The volcano sits about 6 miles from Goma.

“I am fleeing the volcano, I am going to Rutshuru because I have no choice,” said Alliance Simba who was leaving with her son.

Aminata Kavira, another woman evacuating, said had no idea where she would go, but grabbed her belongings and left her home.

“We knew that the situation was becoming precarious,” Kizito Alexis, a resident of Goma told AP, adding they have been told lava will likely hit their homes. “The situation is serious and all the people are leaving and I am leaving for Bukavu,” a city about 100 kilometers (62 miles) from Goma.

Suzana Komayombi said the need to flee was all too familiar, as she also evacuated in 2002 before an eruption took everything she owned.

“The first time there was an eruption we lost everything, today we still take the same road as in 2002,” she said.

Government spokesman Patrick Muyaya said the situation was complex and Goma faced a number of risks: increased earthquakes, another volcanic eruption, a gas explosion under the lake, and ambient environmental toxicity caused by volcanic ash.

Mount Nyiragongo’s last eruption was in 2002, leaving hundreds dead. The lava coated the airport runways and also left more than 100,000 homeless in the aftermath. The volcano also erupted in 1977, killing more than 600 people.