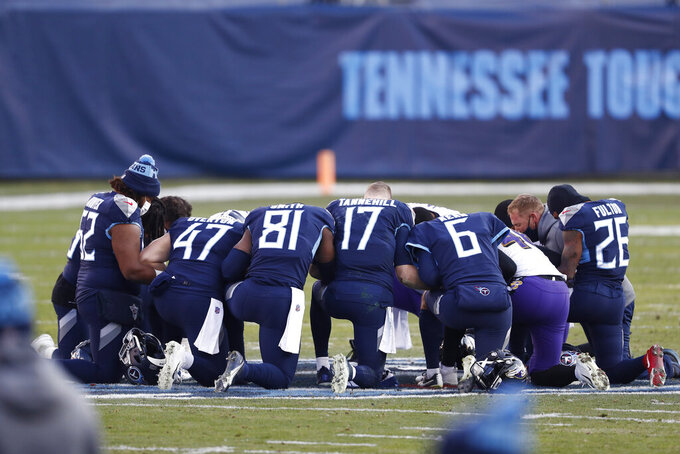 Then they finished their season two wins short of a year ago and further away from their ultimate goal of winning the Super Bowl.

The Titans reached the AFC championship game a year ago after Derrick Henry helped run them through winning three straight road games. Earning a home playoff game by winning the division was the top goal for 2020, and they did just that.

Tennessee started out 5-0 despite going through the NFL's first COVID-19 outbreak that wiped out their bye week, forced the rescheduling of two games and left the Titans playing 14 straight weeks.

Henry became the eighth man to run for 2,000 yards, but joined a different version of the 2,000-yard rushing club when the Titans lost 20-13 to the Ravens in the wild-card game Sunday. A disappointing finish for an offense ranked fourth best in the NFL, averaging 30.7 points a game and tied for second for most yards.

Unlike a year ago, the Titans have Tannehill under contract for three more seasons coming off the best season of his career with 33 touchdown passes and seven more rushing. Henry, now an All-Pro and the NFL's first back-to-back rushing champ since 2006-07, also is signed for three more years.

That has the Titans poised to retool coming off the best season since going 13-3 in 2008.

“I think us as the team we’ll grow from this year, and we’ll be better for it," safety Kevin Byard said.

The Titans used 74 different players during this season played during a pandemic, seventh most in the NFL, and finished with 12 on injured reserve led by three-time Pro Bowl left tackle Taylor Lewan. First-round draft pick Isaiah Wilson went on the non-football illness list.

That led to lots of mixing, matching and coaching up during the season. The last pass Tannehill threw was to Kalif Raymond, who had only nine catches during the season. Corey Davis was sidelined by injury late and didn’t catch a ball in two of his final three games.

Adam Humphries, a big free-agent signee in March 2019, was on injured reserve not having cleared the concussion protocol. Humphries played only seven games and had 23 catches for 228 yards. Humphries has played just 19 of 32 possible games since signing his four-year deal.

Tennessee didn't pick up Davis' fifth-year option last spring, and he turned in a career year with 65 catches for 984 yards. Smith scored nine TDs with 41 catches for 448 yards, but his production dipped when needed to help block more after Lewan was lost for the season. Tannehill would love both back.

Vrabel apologized Monday for the confusion over not naming Shane Bowen as the Titans' defensive coordinator, saying that decision took on a life of its own. The outside linebackers coach ran defensive meetings and called plays during games all season replacing the retired Dean Pees.

Not having the coordinator title made an easy target as the Titans turned in the NFL's worst production on third down, allowing 51.8% conversions. They also ranked 28th in yards allowed and 29th against the pass with only 19 sacks all season.

Vrabel also may be looking for his third offensive coordinator in four seasons with Arthur Smith a top candidate for the several NFL head coaching jobs currently open. Smith already has interviewed with the Jaguars and Jets with more lined up.

Tannehill said the Titans have a strong foundation with the core of players returning and how they like to play the game.

“I feel strongly that no matter who fills that role, or if Arthur is back, that we can build on what we did this year,” Tannehill said.