Tokyo beach volleyball DJ and MC do the work of 12,000 fans 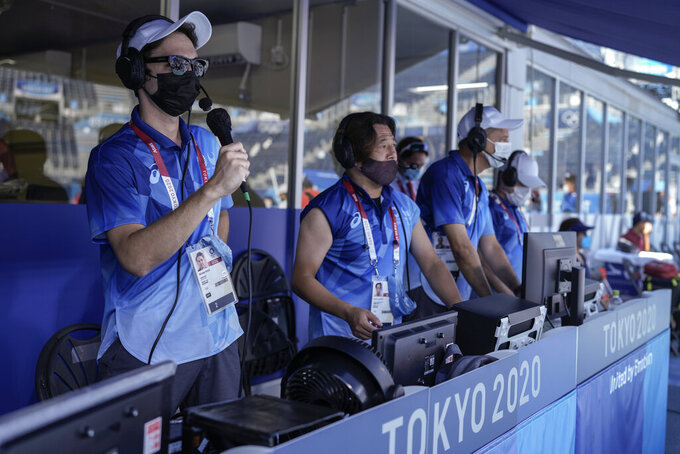 Disc jockey Jeremy Roueche, left, speaks during a men's beach volleyball quarterfinal match at the 2020 Summer Olympics, Thursday, Aug. 5, 2021, Tokyo, Japan. Everyone at the Olympics has had to adjust to the absence of crowds that have stripped the Tokyo Games of their usual flag-waving, anthem-singing spirit. But perhaps no one has faced a bigger challenge than the courtside entertainment at Shiokaze Park. (AP Photo/Petros Giannakouris)

TOKYO (AP) — The Olympic beach volleyball venue in Rio de Janeiro reverberated with the cheers of 12,000 fans, who infused the arena with a samba-dancing spirit that spilled out of the stadium onto Copacabana beach.

This time, there is only a master of ceremonies, a disc jockey, and the whir of the cicadas in the nearby trees.

“I’m still trying to figure out the best way to do this,” emcee Michael Rivas said during a break between the 10-a-day matches of the beach volleyball round-robin.

“The only thing we can do is try our best to make the players feel a little bit more comfortable, hopefully pump them up when they make good plays,” he said. “It’s tough — not only for us, but most importantly I think it’s the athletes are missing the audience more than we are.”

Everyone at the Olympics has had to adjust to the absence of crowds that have stripped the Games of their usual flag-waving, anthem-singing spirit. But perhaps no one has faced a bigger challenge than the courtside entertainment at Shiokaze Park.

Usually one of the biggest parties at the Olympics, the fan-free beach volleyball venue has been slogging its way to the medal round with just the sound of the cicadas and an occasional helicopter overhead to interrupt the athletes calling out plays.

Still, Rivas and disc jockey Jeremy Roueche continue to pump out the music and call out play-by-play for the few dozen members of the media and other athletes sitting in the stands. (With three sessions running from 9 a.m. until after 11 p.m., there are three MCs and two DJs working in shifts.)

“Sometimes silence is as loud as noise,” Roueche said. “The players, they know what’s on the line and they’re going to come out here and play to the best of their ability. But if I can add any type of energy to them, especially in this heat, if I can help all of them out to give them at least as close to the normal experience as possible, I’m happy to do that.”

An American who also DJs for Los Angeles Lakers games and the AVP beach volleyball tour in the U.S., Roueche worked the 2016 Olympics in Brazil. But this time, instead of pumping up the crowd, he is the substitute for it, and the only vestige of vitality for what has typically been the liveliest venue at the Games.

“It’s all about the energy,” he said. “I got a lot of practice with that beginning this NBA season with the Lakers. We had no fans in the building. And just like the players have to do, I have to create my own energy sometimes, too.”

It doesn’t help that the shadeless arena is baking under temperatures often climbing into the 90s (30s Celsius), with a heat index making it feel even warmer. Early in the Games, a typhoon skirted the city and left the players drenched.

But the biggest challenge came two weeks before the opening ceremony, when organizers — who had already banned most foreign visitors — said that because of the rising number of COVID-19 cases in the country they would not allow Japanese fans, either.

Out went the call-and-response and other audience participation routines that are a stadium staple for Rivas. Instead of making perhaps 80% of his calls in Japanese, to keep the local fans involved, it’s now largely in English. (Rivas studied in the U.S. but lives in Japan and is bilingual.)

Roueche has the usual volleyball standbys, which call out “Here Comes the Boom," “Monster Block” and “Ace.” The DJs mix in everything from “YMCA” and a technopunk Cotton-Eyed Joe to Skrillex, trying to match the music to the action on the court.

From his time on the AVP tour, Roueche knows the favorites for many of the American players. Nick Lucena, for example, likes Rage Against the Machine; when Jake Gibb comes out, Roueche plays “I Go To Work” by Kool Moe Dee.

Roueche said he will play requests during introductions or warmups but tries to stay neutral during the matches themselves. Both the emcee and the DJ stressed the No. 1 rule of courtside entertainment is to keep the focus on the court.

“It’s not about us. It has never been about us,” Rivas said. “But we are the ones that connect the athletes with the audience.”

And that’s what’s made it such a missed opportunity.

“When I first walked into this stadium and saw how big it was, just knowing how much more exciting it would be if it was packed, I definitely miss it,” Roueche said. “The fans miss it. I miss it. Everybody working here misses it.

“It would be awesome,” he said. "But it’s still going to be an amazing event.”