Too big to read: Giant bill a leap of faith for Congress 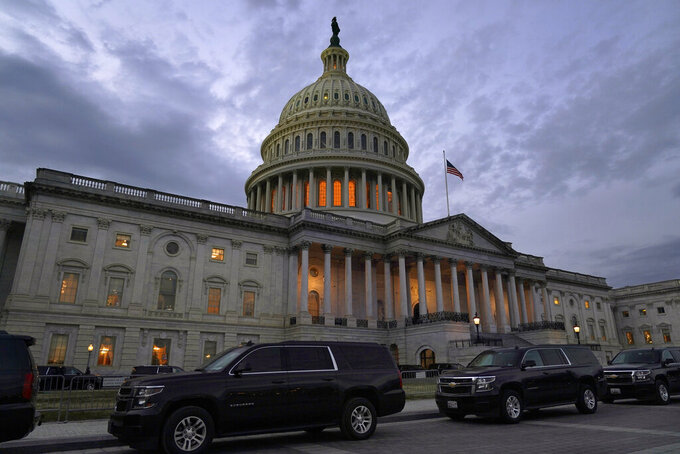 Dusk falls over the Capitol, Monday, Dec. 21, 2020, in Washington. Congressional leaders have hashed out a massive, year-end catchall bill that combines $900 billion in COVID-19 aid with a $1.4 trillion spending bill and reams of other unfinished legislation on taxes, energy, education and health care. (AP Photo/Jacquelyn Martin)

WASHINGTON (AP) — The $900 billion pandemic relief package that was rushed through Congress Monday created a familiar year-end conundrum for lawmakers: It was a bill too big to fail, and also too big to read.

Delivering virus aid to the country required a leap of faith for lawmakers as they cast their votes, practically sight unseen, for a sprawling, 5,593-page bill that linked the pandemic aid with a $1.4 trillion annual spending bill to fund the government. The Senate Historical Office says it's the longest bill they could find record of passing Congress.

“I think if we provide everyone a paper copy we would have to destroy an entire forest,” joked House Rules Committee Chairman James McGovern, responding to a Republican request for a hard copy of the legislation Monday afternoon. The bill was released at 2 p.m., just hours before the House and Senate began voting on it.

Also in the bill: hundreds of unrelated legislative items negotiated by leadership to win support from various constituencies. It includes extended tax breaks for the alcohol industry and motor speedways, comprehensive energy legislation, revised copyright rules, approval of two new Smithsonian museums and lessened penalties for the transportation of water hyacinths. There’s also an entire section on Tibet, including a statement of U.S. policy on how to determine the country’s next spiritual leader, the Dalai Lama, and the decriminalization of the use of the Swiss coat of arms.

It was a dizzying if familiar finish in the Capitol, where lawmakers often procrastinate on passing bills — even those with broad support — until they are on the cusp of heading home for a holiday break. It’s why such bills are often called “Christmas trees,” trimmed with legislative ornaments, and stand among the most glaring symptoms of a broken Congress where the two parties can't agree until they absolutely have to.

Still, the package was an extraordinary response to the global pandemic — the second major bill this year — and was negotiated almost entirely behind closed doors by congressional leadership. And because it includes long-awaited virus relief for businesses and individuals, all the additional items were catching a free ride to President Donald Trump’s desk.

Though the legislation passed with large margins in both the House and Senate, members of both parties expressed frustration with the process.

“NOT ONE Member of Congress will have had time to read through it before voting later today,” tweeted Rep. Ralph Norman, R-S.C. “This is awful governance, and a disservice to the American people.”

Democratic Rep. Alexandria Ocasio-Cortez of New York echoed that thought: “It’s not good enough to hear about what’s in the bill,” she tweeted just before it was released. “Members of Congress need to see & read the bills we are expected to vote on. I know it’s ‘controversial’ & I get in trouble for sharing things like this, but the people of this country deserve to know. They deserve better.”

Rep. Mark Walker, R-N.C., said: “I can’t in good faith vote for legislation of this magnitude without first thoroughly examining its contents and how it affects North Carolinians and their futures.” He called a $600 check for individuals suffering economically “too little, too late.”

Some of the unrelated items weren’t controversial. There’s relief for victims of steep surprise medical bills and the approval of the two museums that will honor American Latinos and women. A Republican senator blocked the two museums earlier this month even though they have broad bipartisan support.

Other items in the package hadn’t passed on their own due to partisan bickering that stalled much of the Senate’s work. They included clean energy provisions, the result of a bipartisan compromise, and legislation renewing the nation’s intelligence programs. The bill also overhauls the aircraft certification process in the wake of crashes of Boeing 737 MAX planes — legislation that the House Transportation Committee called “one of the most significant overhauls to the FAA certification reform process in recent history.”

Several high-ticket items won inclusion, including an almost 400-page water resources bill that targets $10 billion for 46 Army Corps of Engineers flood control, environmental and coastal protection projects. There was also $7 billion to increase access to broadband, $4 billion to help other nations vaccinate their people and $14 billion for cash-starved transit systems, Amtrak and airports.

And then there were the smaller items stowed away in the thousands of pages — important to some lawmakers, but unlikely to win coveted floor time in a freestanding bill.

One section repealed a variety of little-known criminal penalties for minor violations, including the transportation of the water hyacinths and the use of the Swiss coat of arms. The section also decriminalizes the unauthorized application of theft prevention decals or devices, and the unauthorized use of the 4-H Club emblem, the “Smokey Bear” character, the “Woodsy Owl” character or “The Golden Eagle Insignia.”

Though most of the items were listed in lengthy bill summaries, it was unlikely that most lawmakers would even know those things were there.

“Here are the 5,593 pages of language which I’m now perusing and on which we’ll be voting in about six hours,” tweeted Minnesota Rep. Dean Phillips, a Democrat who worked on the virus relief compromise.

Phillips asked where he could find Evelyn Wood, the late American educator who popularized speed reading.