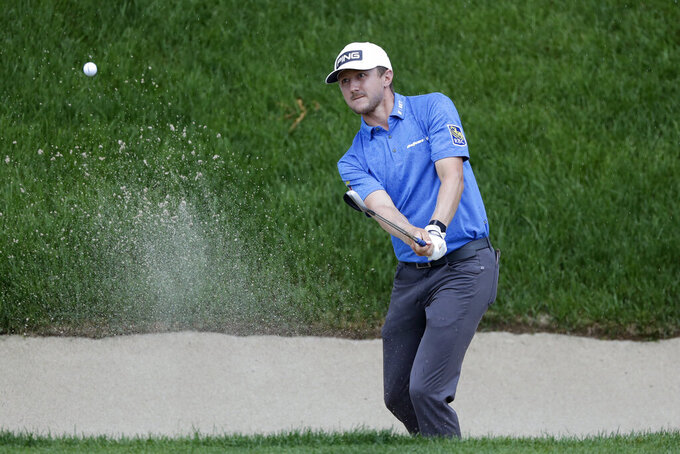 Mackenzie Hughes, of Canada, hits out of a sand trap on the 18th hole during the third round of the Travelers Championship golf tournament at TPC River Highlands, Saturday, June 27, 2020, in Cromwell, Conn. (AP Photo/Frank Franklin II)

Three tournaments is hardly a reasonable sample size. Even so, the numbers have been jarring since the PGA Tour returned to competition.

Mackenzie Hughes opened with a 60 at the Travelers Championship. Rory McIlory has twice posted rounds of 63, and he still hasn’t cracked the top 10 in the three tournaments he has played since the restart. Those are among 56 rounds of 64 or better over the last three weeks.

The PGA Tour put that into even greatest context.

In the last three events, there has been a 64 or lower once every 24 rounds. In the first 22 events before golf was halted by the COVID-19 pandemic, there was a 64 or better once every 54 rounds.

Fourteen players in the last three weeks alone have set or tied their career low scores on the PGA Tour.

So much for rust from the three-month break.

Either that, or everyone has the same amount of rust and the courses are really easy. Not to be overlooked is that players were so eager to return, all of them were playing. The fields at Colonial, Harbour Town and TPC River Highlands had a quality of field normally seen at the Muirfield Village, Riviera or the World Golf Championships.

“I think there’s obviously a lot of good players that are playing these events,” Brooks Koepka said last week before he withdrew from the Travelers Championship out of caution when his caddie tested positive for the coronavirus. “Everybody has been dying to go play. I think a little bit of it is all the good players are playing, and then you’re going to have a good leaderboard and then the golf course. When it’s a birdie-fest and guys get hot, you’re going to see a lot of people jammed up there at the top.”

The field is a combined 1,639 strokes under par in the last three events. At the same three events last year, the field combined to go 271-over par.

Some of that has to do with the calendar and the weather. Those often go together.

The Charles Schwab Challenge at Colonial began June 11, the latest the tournament has ever started. The weather in Fort Worth, Texas, was warm, meaning more water was required to keep the grass healthy, and that led to softer greens that can look like dart boards to the world’s best players.

The RBC Heritage is typically the week after the Masters in April. It was moved to June 18. By then the rye grass overseed at Harbour Town had been overtaken by Bermuda. As a result, the rough was down. The greens were soft and a little slower (“I couldn’t get the ball to the hole,” Dustin Johnson said) and the scores in Hilton Head Island, South Carolina, were absurd. In the third round, there were six rounds of 63. Webb Simpson wound up winning at 22-under 262, breaking the tournament record by two shots.

Last week at the Travelers Championship at least had a little separation, but not much. Johnson opened with a 69 and was outside the cut line in a tie for 72nd. His 61 in the third round put him in range, and he won at 19 under. Of course, Johnson is capable of that anywhere, not just in Cromwell, Connecticut.

Next up is Detroit Golf Club for the Rocket Mortgage Classic, where last year Nate Lashley had two rounds of 63 on his way to 25 under and a six-shot victory.

Bryson DeChambeau has been on roll before and after the pandemic-related break on the PGA Tour. The Travelers Championship was his sixth consecutive top-10 finish. He also is among seven players at the Rocket Mortgage Championship who will try to extend their streaks of making every cut since golf returned.

Sliding the other direction are Brian Gay, K.H. Lee, Russell Knox, Danny Willet and Kevin Tway. They are at Detroit Golf Club this week trying to avoid missing the cut at every event since the restart.

Will Gordon had the best week of anyone not named Dustin Johnson at the Travelers Championship. His tie for third was worth the equivalent of enough FedEx Cup points that he earned special temporary membership on the PGA Tour, meaning he gets unlimited sponsor exemptions for the final five tournaments of the year.

He also earned $436,600. How to celebrate the biggest check of his young career? By driving 700 miles to Detroit for the Rocket Mortgage Classic.

Gordon was asked jokingly if he wasn’t supposed to fly privately.

“I’m not ready for that bill, mentally,” he said with a smile.

The drive was more health-related. It took a little more 10 hours — three on Sunday night, seven on Monday. The idea was to keep his circle small.

“As this COVID thing continues to be a real issue to everything going on, I just wanted to keep my bubble really small,” Gordon said. “So my caddie and I kept the same car and we drove all the way here. It wasn’t that bad of a drive.”

If he finishes in the top 10 or gets an exemption to the Workday Charity Open next week, it’s only a three-hour drive to Dublin, Ohio.

The PGA Professional Championship first was scheduled for April 26-29, and then it was pushed back to July 19-22 at Omni Barton Creek Resort & Spa in Austin, Texas. Now, the tournament has been canceled after the PGA of America met with local health authorities.

The PGA Championship still will have 20 club pros. It will take the top 20 from the 2019 PGA Player of the Year points list, which was the plan when it first was postponed (and before the PGA Championship was moved from May to August).

The USGA is following suit. With no qualifying this year because of the pandemic, the U.S. Open has one-time exemption categories. One is for the leading three players from the PGA Professional Championship. Now, the U.S. Open spots will go to the top three from the 2019 PGA points list.

No one’s pen is running out of ink during a return to competition that does not allow spectators. Players get out of their cars and have an uninterrupted walk to wherever they’re going, if that’s the locker room, dining area or practice range.

There are no fans asking for autographs.

Dustin Johnson could think of only one autograph he signed at his first two tournaments. That was for a walking scorer who was in the group behind him and raced up to get something signed.

Chase Koepka withdrew from the Travelers Championship after Monday qualifying because he was in close contact with his brother's caddie, Ricky Elliott, who tested positive for the coronavirus. The tournament offered him an exemption for next year. ... GSE Worldwide says it has signed a deal to represent Lexi Thompson. She previously was represented by Blue Giraffe. ... Tyrrell Hatton now has the longest active cut streak on the PGA Tour at 14, leaving him 128 tournaments away from matching the record set by Tiger Woods.

Dustin Johnson has finished at 19 under or lower in nine of his 22 victories worldwide, including his last six wins.