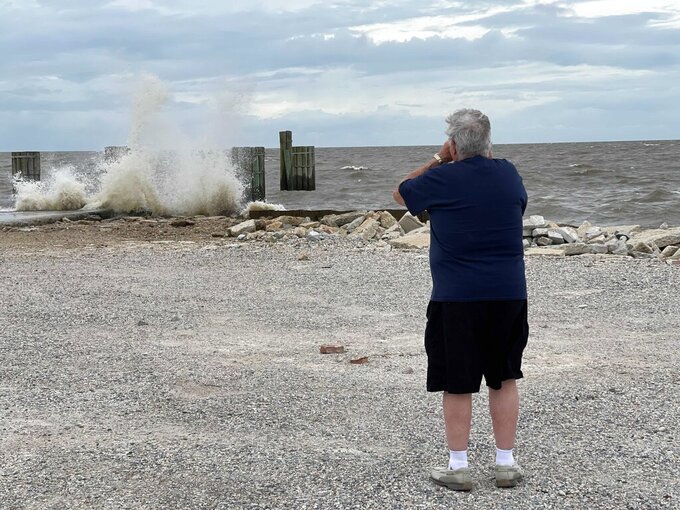 A man takes a photo of waves crashing into what once was a dock for a ferry that transported people from Bay St. Louis to Pass Christian, Miss., as a tropical system moves toward the Mississippi Coast on Friday, June 18, 2021. Forecasters predict a tropical system will bring heavy rain, storm surge and coastal flooding to the U.S. Gulf Coast. The poorly organized disturbance was located Friday morning about 255 miles south of Morgan City, Louisiana. (Justin Mitchell/The Sun Herald via AP) 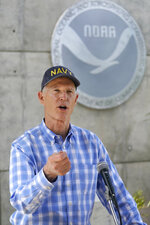 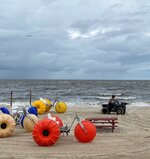 NEW ORLEANS (AP) — High winds and heavy rains buffeted coastal Louisiana and Mississippi on Friday as a disorganized and unpredictable tropical weather system churned through the Gulf of Mexico, forcing cancellation of Juneteenth celebrations in Mississippi and Alabama and threatening Father's Day tourism.

The system, moving north toward Louisiana through the Gulf of Mexico carried tropical storm-force sustained winds of 45 mph (72 kph) but forecasters said it couldn't be classified as a tropical storm because it lacked a single, well-defined center.

“This one is just a sloppy mess. There’s multiple circulations within this broad area of circulation,” said Benjamin Schott, meteorologist in charge at the National Weather Service office in Slidell, Louisiana. Forecasters said the storm was likely to dump anywhere from 5 inches (13 centimeters) to 10 inches (25 centimeters) of rain along parts of the Gulf Coast — even 15 inches (38 centimeters) in isolated areas.

In Louisiana, the threat came a month after spring storms and flooding that were blamed for five deaths, and as parts of the state continued a slow recovery from a brutal 2020 hurricane season. That included Tropical Storm Cristobal that opened the season last June, hurricanes Laura and Delta that devastated southwest Louisiana, and Hurricane Zeta that downed trees and knocked out power for days in New Orleans in October.

“Of course, with weather like this, you know you can’t run, but weekends, holidays, that’s when tourists are coming down here,” said Louisiana swamp tour boat captain Darrin Coulon. He canceled tours Friday and hoped for better weather Saturday and Sunday as he secured his boats in Crown Point.

Worries were similar for Austin Sumrall, the owner and chef at the White Pillars Restaurant and Lounge in Biloxi, Mississippi. He had 170 reservations on his books for Sunday, but was concerned that some patrons would cancel. “We saw, especially last year, the rug can get jerked out from under you pretty quickly,” he said.

A tropical storm warning extended from Morgan City, Louisiana, to the Okaloosa-Walton County line in the Florida Panhandle. Coastal surge flooding was possible and flash flood watches extended along the coast from southeast Louisiana into the Florida Panhandle and well inland into Mississippi, Alabama and into parts of central and northern Georgia.

“I hope it just gets in and gets out,” said Greg Paddie, manager of Tacky Jack’s, a restaurant at Alabama’s Orange Beach.

Mayor Jeff Collier of Dauphin Island, off Alabama's coast, said officials there had already contacted debris removal contractors and made sandbags available to residents. “We’re pretty well prepared to the extent that we can be,” Collier said. "This is not our first rodeo.”

Disappointment was evident in the voice of Seneca Hampton, an organizer of the Juneteenth Freedom Festival in Gautier, on the Mississippi Gulf Coast. He spent weeks arranging food trucks, vendors, a bounce house, face painting and free hamburgers and hot dogs for the event, which was highly anticipated because last year’s was canceled due to the pandemic and because of Juneteenth's new designation as a federal holiday.

“It’s something that means a lot to people, and there were people that were bummed out, like ‘I already had in my mind I was coming out there to celebrate,’” said Hampton.

By Friday evening, storm clusters were dumping rain at rates as high as 4 inches (10 centimeters) an hour along parts of the Louisiana and Mississippi coasts, Schott said. Radar showed more heavy rain moving ashore over Alabama and the Florida Panhandle.

An nighttime advisory from the National Hurricane Center said the system was about 60 miles (95 kilometers) south of Morgan City, Louisiana, and was moving north at 13 mph (20 kph).

Health officials ordered oyster harvesting areas closed along much of Louisiana's coast due to possible storm-driven pollution that could make oysters unsafe to eat.

In Orange Beach, Paddie said Tacky Jack's still has sandbags left over from its preparations for last year's Hurricane Sally. That September storm, blamed for two deaths, threw ships onto dry land, knocked out power to hundreds of thousands of people in Alabama and in the Florida Panhandle.

There have already been two named storms during the 2021 Atlantic hurricane season. Meteorologists expect the season to be busy, but not as crazy as the record-breaking 2020 season.

Mexico, while getting rain from the storm in the Gulf, was also threatened by a storm in the Pacific. Tropical Storm Dolores formed Friday morning and was expected to make landfall on Mexico’s west-central coast Saturday evening, possibly near hurricane strength, according to the National Hurricane Center.