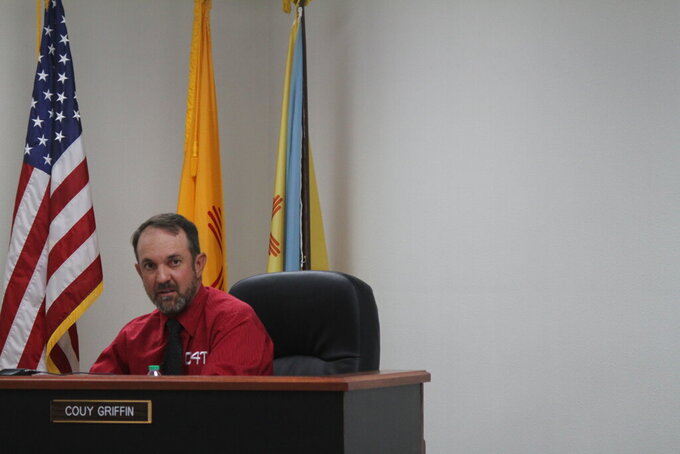 Otero County Commissioner Couy Griffin presides at a public meeting in Alamogordo, N.M., on Thursday, May 13, 2021, in a shirt with a "C4T" logo that stands for Cowboys for Trump. Griffin founded the support group for President Trump that held horseback parades across the country. Griffin is reviled and revered in politically conservative Otero County as he confronts criminal charges for joining protests on the steps of the U.S. Capitol on Jan. 6. He is fighting for his political future amid a recall initiative and state probes into his finances. (AP Photo/Morgan Lee)

TULAROSA, N.M. (AP) — He rodeoed in a Buffalo Bill-style Wild West show, carried his message on horseback from the Holy Land to Times Square and was invited to the White House to meet the president.

But luck may have run out for this cowboy pastor who rode to national political fame by embracing President Donald Trump with a series of horseback caravans and came crashing down with a defiant stand Jan. 6 against President Joe Biden’s election.

And yet he remains determined. He sees himself as governor one day.

The first-term county commissioner forged a group of rodeo acquaintances in 2019 into a promotional Cowboys for Trump posse to spread his conservative message about gun rights, immigration controls and abortion restrictions.

Trump’s election defeat has left the 47-year-old father in a lonely fight for his political life after preaching to crowds at the U.S. Capitol siege, promising to take his guns to Biden’s inauguration and landing in jail for over a week.

In Washington, prosecutors unveiled photographs of Griffin climbing a toppled fence and another barrier to access the Capitol steps.

Public defense attorneys say a close reading of the law shows the area wasn’t off limits. They say Griffin didn’t partake in violence and was well within his free speech rights as he voiced election grievances and attempted to lead a prayer with a bullhorn.

Griffin is one of thousands of Trump loyalists in public office who are charting an uncertain future ahead of the 2022 election cycle. He’s part of a smaller cadre who flirted with insurrection on Trump’s behalf and may still pay a high price. In all, more than 400 people were charged in the insurrection, which left five dead and dozens of officers injured.

Griffin has been rebuked by some Republicans over his racial invective. He's also been suspended from Facebook and banished from Native American lands in his district as he contests charges of breaking into the Capitol grounds and disrupting Congress that could carry a one-year sentence. A recall effort is underway, amid a bevy of lawsuits.

Still, loyal constituents are easy to come by in a rural county steeped in the anti-establishment, pro-gun culture that dominates southern New Mexico.

“He means no malice on anybody," said George Seeds, outside the New Heart Cowboy Church in Alamogordo where Griffin once served as pastor. “His concern is the direction of this country, where it’s going.”

Defiance of federal government and its oversight of public lands are staples of politics in Otero County, which spans an area three times the size of Delaware, from the dunes of White Sands National Park to the peaks of the Lincoln National Forest.

Banned from Washington until testimony or trial, Griffin has returned to the routines of home in a tidy double-wide trailer in Tularosa, working most days as a stone mason. A donkey named Henry brays from a side yard.

In a conversation with The Associated Press, Griffin says he learned to love the spotlight during five years as an expert rodeo hand in a Wild West show at Paris' Disneyland park.

His rides with Cowboys for Trump through numerous states were a reprise of proselytizing trips he made from Ireland to Jerusalem, before social media, to hand out the Gospel of John.

The group captivated the public imagination with its first outing, a 2019 flag-waving ride down the shore of the Potomac River to Arlington National Cemetery.

Ramie Harper, a 67-year-old former bull rider from Fruitland, took a break from making custom hats to join the caravan.

With calls for an independent investigation of the Capitol siege blocked by Senate Republicans, Griffin is out on bail and speaking his mind.

He’s an advocate for stricter state voting laws and a die-hard opponent of COVID-19 restrictions who says “hell no” to taking the vaccine.

Griffin still wears a monogrammed Cowboys for Trump shirt to commission meetings. But his allegiance to Trump has wavered.

“I don’t have the same confidence in him,” Griffin said. “Whenever you say, ‘China stole the election. ... The election was stolen from me,’ and then you just walk away? That’s hard for me to accept.”

He says his obsession with politics has taken a toll, contributing to his 2019 divorce and tensions with relatives.

“I’ve had my own family say some pretty nasty things," Griffin said. “It’s been real hard.”

With Trump or without, Griffin still ascribes to unsubstantiated claims of massive 2020 election fraud.

He yearns to someday run for governor even though state GOP leaders are openly scornful and Democrats hold every statewide elected office.

More immediately, Griffin is eyeing an open 2022 sheriff’s race in another New Mexico county where he grew up. His grandfather Wee Griffin held the Catron County post from 1963 to 1966. Trump won there in 2020 with 73% of the vote.

Griffin has cast Democratic Gov. Michelle Lujan Grisham as his political nemesis on issues of gun control, abortion and pandemic restrictions. He’d like to reinvent the sheriff's role as a brake on the governor’s power.

“The county sheriff’s sole duty and responsibility is to protect our individual rights,” he said. “You think that the governor hates me as a county commissioner — put a gun and a badge on me, and we’ll see.”

Jeff Swanson, chairman of the Otero County Democratic Party, says Griffin’s divisive remarks hinder county efforts to secure state infrastructure spending, and he has engaged in intimidation by recording Cowboys for Trump videos from his office with a shotgun within view.

In Alamogordo, Griffin’s rhetoric on race has steeled the determination of opponents who want him out of office.

Griffin delivered a scathing rebuke last year as the NFL announced game-opening renditions of “Lift Every Voice and Sing,” also known as the Black national anthem.

“They want to destroy our country,” Griffin said in a video monologue. “I got a better idea. Why don’t you go back to Africa and form your little football teams. ... You can play on an old beat-out dirt lot.”

Everette Brown, a Marine veteran and information technology specialist at Holloman Air Force Base who is Black, said that comment shows politics have changed Griffin, whom he once respected.

“I’m a big boy. I can handle a lot. And that was one that got me,” said Brown, part of a committee seeking to recall Griffin.

For now, Griffin has halted the petition with an appeal to the state Supreme Court, which hasn't decided whether to intervene. Meanwhile, state prosecutors are investigating allegations Griffin used his office in coordination with Cowboys for Trump for personal financial gain, and signed a child-support check to his ex-wife from his Cowboys for Trump account.

Griffin has acknowledged using the county building for promotional videos but said he never claimed they were affiliated with Otero County. He also says Cowboys for Trump is a for-profit company, not a political group.

Donnie Reynolds, a 51-year-old sales associate at an Alamogordo hardware store, says Griffin is being targeted for ties to Trump.

He says Griffin is right about lots of things, like the need for a border wall.

“They’re going find out he didn’t have anything to do with these types of things,” he said. "They’re going to eat some crow.”