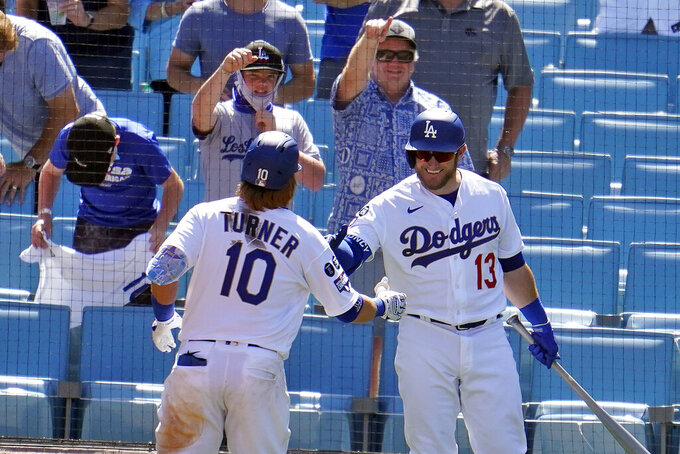 LOS ANGELES (AP) — Justin Turner's fond memories of the Los Angeles Dodgers' championship last fall will always be weighted by slight disappointment in the weird way it all ended for him personally.

After receiving the ring symbolizing last season's success Friday, Turner made sure his memories of this particular celebratory day will only be sweet.

Turner homered in the sixth inning, and the Dodgers celebrated their World Series ring ceremony day with a 1-0 victory over the Washington Nationals.

Turner received some of the fans' loudest cheers in the pregame ceremony, befitting his status as a Southern California native beginning his eighth season with the club.

The redheaded Dodgers slugger was outstanding in the World Series last fall, only to get pulled in the eighth inning of Los Angeles’ clinching victory due to a positive COVID-19 test.

That memory still bothers him, so he made a new one.

“Today was a big day for me personally,” said Turner, who re-signed with Los Angeles in February. “I felt like it was the first real time I got to get out there on the line with my teammates and enjoy the championship and celebrate the ring. And especially to do it with fans in the stands made it even more special."

Turner broke MLB's health and safety protocols by returning to the field to celebrate after getting pulled from the clincher last fall, and he received criticism and eventually apologized for it. After an offseason without a parade or most of the usual spoils of victory, the 36-year-old veteran got emotional while receiving his first World Series ring — and a few hours better, punctuating the day with the decisive hit in a victory for 15,036 Dodgers fans.

“That’s why I kept my glasses on,” Turner said with a laugh. "I didn’t want to let anyone see me getting emotional under there.”

The Dodgers received their World Series championship rings in a pregame event in front of the fans who weren’t allowed inside Dodger Stadium in 2020 while their franchise won its seventh title.

“We’re deep and talented, and that’s what we’re about here,” said Buehler, who hasn't lost since 2019. “We know that anybody that’s in there is going to play well, and we’re pleased with the group we have and where we’re at.”

Corey Knebel struck out the side in the ninth for his second save, completing the shutout by four Dodgers pitchers in this meeting of the last two World Series champions. Washington was shut out for the second straight game, although Wednesday’s whitewash was the back end of a seven-inning doubleheader.

Buehler (1-0) yielded six hits with four strikeouts and no walks in another strong start for LA. His zeros were matched by Joe Ross, who threw five scoreless innings of two-hit ball for the Nationals.

The Nats lost their third straight after starting the season late and short-handed due to coronavirus cases and quarantines. Washington manager Dave Martinez pulled Ross after 67 pitches in his first action in 12 days.

“I just hadn’t really pitched in a while,” said Ross, who won a rotation spot after opting out of last season. “I was getting built up in spring training, but after the extended time off, hopefully I’ll feel more comfortable getting built up as we go on.”

The Dodgers didn’t get a runner to second base until Turner hammered a two-out changeup from former Los Angeles reliever Luis Avilán (0-1) into the left field bleachers.

Fans hadn’t been in Dodger Stadium since Game 5 of the 2019 NL Division Series, when the Nationals eliminated Los Angeles on the way to their own championship. Washington also kept the powerhouse Dodgers out of the World Series for the only time in the past four seasons.

Washington opened the eighth with two hits off Blake Treinen, but the reliever escaped the jam with help from Victor Robles, who got caught trying to steal second with nobody out and the tying run at third. Martinez said Robles ran on his own.

“Not a very good play in that situation,” Martinez said. "That’s just a young baseball player trying to be overly aggressive, and he’s got to be smarter than that. That’s something we’ve got to teach him. I’ll sit with him tomorrow and explain the situation.”

Dodgers: Bellinger went on the injured list with a bruised left calf after getting spiked Monday in Oakland. ... Betts missed his second straight start with back stiffness.

Julio Urías (1-0, 1.29 ERA) takes the Dodger Stadium mound for the first time since getting the final seven outs of the World Series. The Nationals didn't immediately announce their starter.