U. of Nebraska president: Campuses will be ready for virus 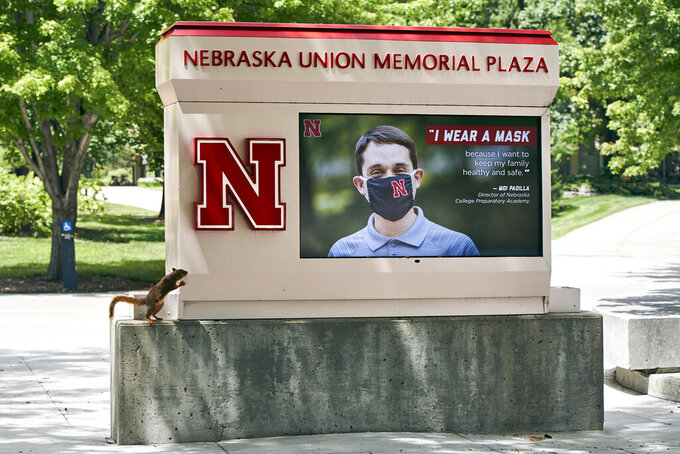 A squirrel appears to be peering at the screen outside the University of Nebraska-Lincoln student union building in Lincoln, Neb., Tuesday, July 21, 2020. University of Nebraska President Ted Carter and Neb. Gov. Pete Ricketts announced on Tuesday their plans for resuming in-person classes in the fall amid the coronavirus pandemic. (AP Photo/Nati Harnik)

LINCOLN, Neb. (AP) — The University of Nebraska's new president expressed confidence Tuesday that all four university campuses will be ready for in-person classes this fall despite the threat of the coronavirus.

Ted Carter said the campuses in Lincoln, Omaha and Kearney have already taken steps to welcome back students while minimizing the risk that the virus will spread.

University officials have left open the possibility that they will return to online learning if the pandemic worsens. But Carter said it's important for the university to offer in-person instruction. He said university surveys have shown that the vast majority of students and faculty members want to return for in-person classes, and extra precautions will taken for those who are at greater risk.

“You cannot get the same level of education through a Zoom call,” Carter said.

In May, the university's flagship campus in Lincoln announced that it would start classes online for one week on Aug. 17 and then transition to in-person learning for the rest of the fall semester, starting Aug. 24. The semester will be shortened, and scheduled to end before Thanksgiving.

Carter was sworn in as the university's new president in January, just a few months before the pandemic forced widespread closures in Nebraska and the rest of the country. The university closed its campuses in April as the pandemic worsened.

The campuses also shifted to online classes during the spring semester to try to keep the virus from spreading.

Nebraska's community colleges are taking similar steps. For instance, Northeast Community College in Norfolk announced in June that it will offer a combination of small, socially distanced on-campus classes and online instruction.

They also expect to take a leading role in training people who lost their jobs because of the pandemic, said Greg Adams, executive director of the Nebraska Community College Association.

The state has set aside $16 million in federal coronavirus aid to help pay those educational costs. Ricketts said community colleges will administer the program and distribute the money in the form of scholarships for people going into high-demand jobs.

“We need to get (people who lost their jobs) back in the workforce as quickly as we can," Adams said.