UCLA professor: No racism in refusing to cancel final 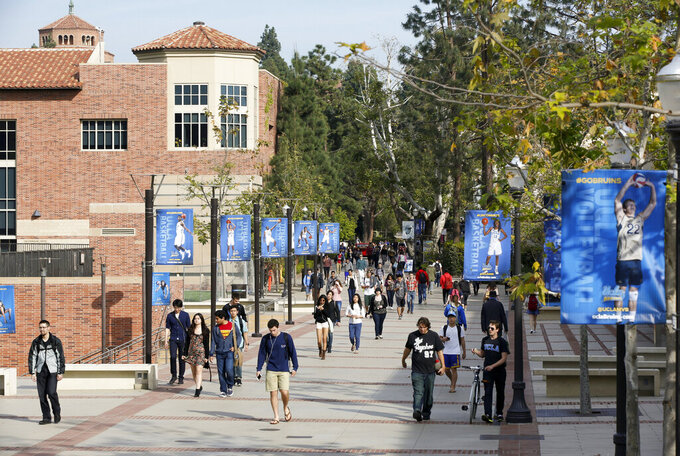 FILE - In this Feb. 26, 2015, file photo, students walk on the University of California, Los Angeles campus. A UCLA professor who was suspended following an email exchange with a student who wanted a final exam altered or canceled because of racial unrest, says his refusal to do so has nothing to do with racism. (AP Photo/Damian Dovarganes, File)

LOS ANGELES (AP) — A University of California, Los Angeles, professor suspended over an email exchange with a student who wanted a final exam canceled or changed because of racial unrest said he’s receiving threats and wants his "reputation restored" after what he calls unfounded allegations of racism.

The controversy began June 2 when Gordon Klein, who teaches accounting and business law, received an email from a student who is not black that suggested the final for Klein's principles of taxation course might be canceled, shortened or graded differently for black students. The student said black classmates were suffering from fear, anxiety and trauma since the death of George Floyd at the hands of Minneapolis police, which galvanized protests nationwide.

Klein replied that the suggestion would be difficult because coronavirus restrictions meant his videotaped lectures were all online and he doesn't know the races of his students in most cases. He added that canceling the final exam wasn't an option because it represented the entire course grade.

Klein said the student, whom he declined to identify, wrote back to apologize, adding he didn't mean to be offensive. The two had known each other from a previous class, and in the student's first email, he'd thanked Klein for providing him and others with “anti-racist resources.”

By the next day, however, Klein's email was trending on Twitter, an online petition demanding he be fired was launched by another student and the dean of UCLA's Anderson School of Management, where Klein has taught for 39 years, was demanding answers.

Some of those responding to the online petition were most offended by his email’s closing remarks, in which he paraphrased Martin Luther King’s famous statement that people should be judged not by the color of their skin but the content of their character.

Klein, who is white, said he did that as an admirer of King.

His email also questioned how biracial students, if there are any in the class, should be treated, asking, “Are there any students that may be of mixed parentage, such as half-black-half Asian? What do you suggest I do with respect to them? A full concession or just half?”

He also asked if any white students from Minneapolis might be going through their own trauma, worried they would be seen as racist because of what happened in their city and how they should be handled.

Klein said he meant nothing offensive in any of the remarks.

“I come from a Detroit family where my mother taught in inner-city Detroit, where my father was an accountant for auto workers' unions and where I co-taught an African American studies class at the University of Michigan,” he said. “I abhor the identification of individuals by their race, whether you plan to disfavor them or favor them. I believe in a race-neutral world.”

In a brief statement Wednesday, UCLA said, “The lecturer is on leave from campus and his classes have been reassigned to other faculty.”

The statement added that UCLA is “committed to creating a learning, working and living environment that is free from discrimination, harassment or retaliation” and that the university investigates all allegations involving those issues.

Klein said he plans to defend himself vigorously and has enlisted the aid of the nonprofit Foundation for Individual Rights in Education, which has accused UCLA of violating his free-speech rights.

“I would like to get my reputation restored, and I will engage in all lawful means from our legal system to ensure that occurs,” he said, adding, “It is the height of ludicrosity for anyone to suggest that a single bone in my body is racist.”

After a brief phone call with his dean the day after the emails, Klein learned he was being placed on involuntary leave until June 24.

Klein holds a law degree, is a certified public accountant and the author of the textbook “Ethics in Accounting: A Decision-Making Approach,” according to his UCLA bio.