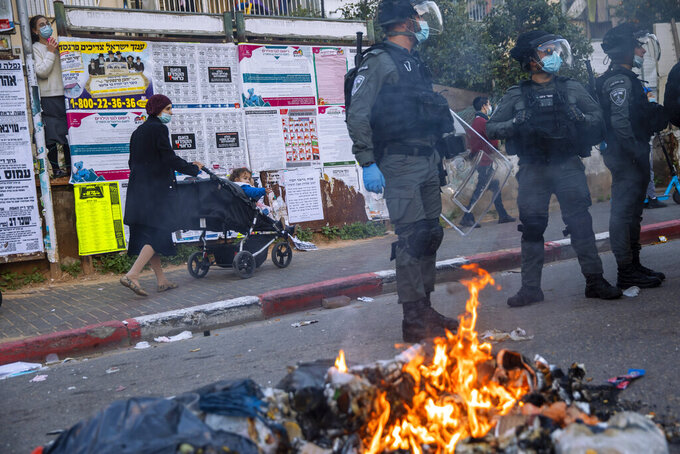 Israeli police officers stand by burning garbage during clashes with ultra-Orthodox Jews over the coronavirus lockdown restrictions, in Bnei Brak, Israel, Sunday, Jan. 24, 2021. As he seeks re-election, Prime Minister Benjamin Netanyahu has turned to a straightforward strategy: Count on the rock-solid support of his ultra-Orthodox political allies and stamp out the coronavirus pandemic with one of the world’s most aggressive vaccination campaigns. But with ultra-Orthodox communities openly flouting safety guidelines and violently clashing with police trying to enforce them, this marriage of convenience is turning into a burden. (AP Photo/Oded Balilty)

JERUSALEM (AP) — As he seeks reelection, Israeli Prime Minister Benjamin Netanyahu has turned to a straightforward strategy: Count on the rock-solid support of his ultra-Orthodox political allies and stamp out the coronavirus pandemic with one of the world’s most aggressive vaccination campaigns.

But with ultra-Orthodox communities openly flouting safety guidelines and violently clashing with police trying to enforce them, this marriage of convenience is turning into a burden. Netanyahu has watched his political partners undermine the country’s war against the virus and spark a public backlash that threatens him at the ballot box.

“Netanyahu’s hope is that Israel will be the first country in the world to be vaccinated, that he will be able to open the economy to everyone, ultra-Orthodox and secular, and then the problem will be forgotten,” said Moshe Klughaft, a campaign strategist who has advised Netanyahu in the past. If the current troubles persist, he said, “Netanyahu will be in big trouble.”

Less than two months before the March 23 election, Israel finds itself in a paradoxical situation. In just one month, it has vaccinated over a quarter of its 9.3 million people and is on pace to inoculate the entire adult population by election day. At the same time, it has one of the developing world’s highest rates of infection, with some 8,000 new cases detected each day. This week it tightened a month-old lockdown by closing its international airport to nearly all flights.

There are a number of reasons for the ongoing outbreak. Before the airport was shuttered, Israelis returning from abroad brought back with them fast-spreading variants of the coronavirus. Other segments of the population have also failed to comply with lockdown provisions that have closed stores, schools and restaurants.

But there is little question that the ultra-Orthodox sector — where schools remain open, synagogues are full and mass weddings and funerals continue to take place — has been a driving force in the spiking numbers.

Experts estimate that the sector, making up about 12% of Israel’s population, accounts for 40% of new COVID-19 cases. Official data also shows that vaccination rates in ultra-Orthodox towns, where science often takes a back seat to faith, are well below the rest of the country.

The ultra-Orthodox have long wielded disproportionate influence in Israel, using their kingmaker status in parliament to extract concessions from the nation’s leaders. Ultra-Orthodox males are exempt from otherwise mandatory military service. The community’s schools receive generous subsidies while providing subpar educations that focus almost entirely on religious studies and ignore critical subjects like math, English and science. As adults, many males shirk the workforce, collecting welfare payments while studying in religious seminars.

The system has long bred resentment among Israel’s secular majority, and economists have repeatedly warned that it is unsustainable. But political leaders have rarely been willing to challenge the system.

Netanyahu is no exception. By keeping the money flowing, he has found a reliable ally for most of his 12 years in office. Ultra-Orthodox support is critical as Netanyahu tries to form a majority coalition in favor of granting him immunity from corruption charges.

But the skyrocketing infection rate, combined with the violent protests, has brought unwelcome attention. In recent days, large crowds of ultra-Orthodox protesters, many of them unmasked, have attacked police sent to enforce closure orders and journalists who covered the unrest. In the ultra-Orthodox city of Bnei Brak, a policeman fired his pistol into the air to fend off a hostile crowd. That night, protesters torched a bus in the city.

Ultra-Orthodox leaders say their communities are being unfairly singled out and that a small minority is responsible for the troubles. They say that crowded living conditions and large families are the main reason for high infection rates, and that society does not understand the importance of prayer and learning in the ultra-Orthodox world.

After Bnei Brak’s mayor, Avraham Rubenstein, was attacked by a crowd of protesters this week, he accused police of inflaming the situation and said authorities should let the community solve its own problems.

But Dov Habertal, a prominent ultra-Orthodox lawyer and commentator, said it was time for introspection. He said violations are widespread, and that ultra-Orthodox politicians, rabbis and a subservient media were all complicit.

“There is no lockdown. It’s a big lie,” he told Channel 13 television. “Synagogues are open, ritual baths, rabbinic lectures, weddings, and Netanyahu cooperates with them,” he said.

Netanyahu, counting on the vaccination program to propel him to victory, has appeared unwilling or unable to take on his ultra-Orthodox allies. Asked about the unrest, Netanyahu told reporters this week that he had attempted to call Rabbi Chaim Kanievsky, one of the country’s most influential spiritual leaders. The 93-year-old Kanievsky “was unavailable,” Netanyahu lamented, saying he left a message with the rabbi’s grandson.

This perceived weakness has begun to play into the hands of Netanyahu’s rivals. Yair Lapid, leader of the centrist Yesh Atid party, which appeals to middle-class, secular voters, has seen his popularity shoot up.

“We will put an end to this madness,” Lapid wrote on Twitter. “With us, there will be one law for everyone.”

Opinion polls this week projected Yesh Atid finishing second in elections behind Netanyahu’s Likud, but in a potentially better position to form a coalition than Netanyahu. Another poll by Channel 12 found over 60% of respondents do not want any ultra-Orthodox parties in the next government.

Dr. Nadav Davidovitch, director of the school of public health at Israel’s Ben-Gurion University and a government adviser on the coronavirus, said the ultra-Orthodox community has posed numerous challenges for policy makers.

He cited the sector’s autonomy, distrust of the government, fragmented leadership, communal lifestyle and densely populated neighborhoods. “All of this together creates a very fertile ground for infection,” he said.

Davidovitch said sending in police often makes the situation worse. Instead, he said experts are working with community leaders on outreach programs to improve compliance with lockdown measures and assure the public the vaccine is safe. He said there has been improvement on both fronts, a trend he expects to continue.

But with infections still raging and the mass vaccinations requiring weeks to take effect, it is unclear how much the situation will improve by election day.

“I think that we have all the tools in the coming weeks to open very gradually,” Davidovitch said. “We already have improvement. But we have to be cautious about it and patient.”