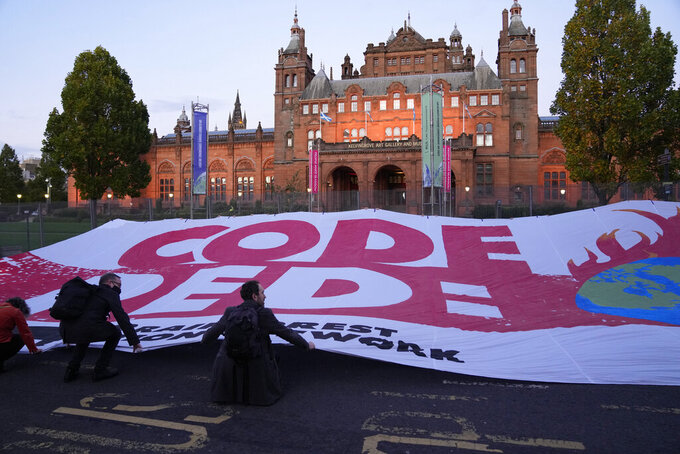 GLASGOW, Scotland (AP) — The United Nations climate conference on Wednesday urged sports organizations and teams worldwide to meet the environmental targets they signed up to.

FIFA, the International Olympic Committee, the NFL, the NBA and the New York Yankees are among nearly 300 signatories to the Sports for Climate Action Framework (S4CA) since the Paris climate agreement was reached in 2015.

“These organizations are now being challenged to reduce emissions 50% by 2030 at the latest and to achieve net-zero emissions by 2040,” Patricia Espinosa, U.N. Climate Change Executive Secretary, said at the COP26 conference in Glasgow.

Members of S4CA also “commit to submitting plans to outline concrete actions that will be taken to implement 2030 targets” and publish annual updates, the U.N. said.

FIFA later confirmed its pledge to the goals, and has committed — together with tournament organizers in natural gas-rich Qatar — to staging a carbon-neutral World Cup next year.

The 2022 edition is rare chance for World Cup fans to use mostly public transport to travel between games in eight stadiums in and around the city of Doha.

Air travel was the most viable option for fans traveling to games scattered across Brazil and Russia at the 2014 and 2018 World Cups. The 2026 tournament demands journeys of thousands of miles (kilometers) across the United States, Canada and Mexico.

Soccer leaders and teams often use private jets, and Manchester United was criticized last month for taking an 85-kilometer (50-mile) flight to a Premier League game at Leicester.

The IOC said last month it also set a stricter interim target of 30% reduction in emissions by 2024, when Paris will host the Summer Games.

Paris Olympics organizers persuaded the IOC to let them stage surfing events more than 15,000 kilometers (9,000 miles) away in Tahiti. They said the decision would ultimately reduce carbon footprints because the chosen venue, Teahupo’o, also hosts an annual top-tier event immediately after the games.