Unfinished work at a Players Championship that didn't start 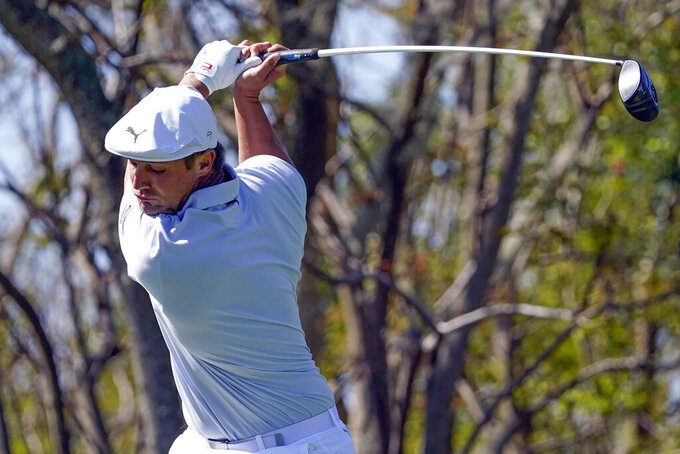 Bryson DeChambeau hits a shot from the third tee during the final round of the Arnold Palmer Invitational golf tournament Sunday, March 7, 2021, in Orlando, Fla. (AP Photo/John Raoux)

PONTE VEDRA BEACH, Fla. (AP) — Hideki Matsuyama made a 25-foot eagle putt on his final hole of the first round at The Players Championship and earned a spot in the record book as the ninth player to post a 63 at the TPC Sawgrass.

And then it was gone.

Now it's about starting over. The defending champion is still Rory McIlroy, who won in 2019 and who began last year with a 72, leaving him nine shots behind. On Thursday, everyone is back to even.

“I think I feel a bit better about that than Hideki does,” McIlroy said. “If I felt for anyone last year because of all this, it was Hideki. That was obviously a hell of an opening round. But it's nice to be back, and hopefully I can get off to a better start than I did last year.”

So much has changed in a year since PGA Tour Commissioner Jay Monahan held a news conference — media sitting shoulder-to-shoulder, no one wearing masks — to announce the tour was shutting down. That goes beyond the weekly testing for the coronavirus and masks required for what is now limited attendance outside the ropes.

McIlroy was No. 1 in the world at The Players last year and building momentum toward the Masters, his missing leg of the career Grand Slam. He had seven consecutive top-5 finishes around the world, including a World Golf Championship title.

He returns to Sawgrass at No. 11, out of the top 10 for the first time in three years. And after another pedestrian finish at the Arnold Palmer Invitational last week, he is starting to search for answers.

“The good golf is in there, and I feel capable of going out and shooting good scores any week that I play on any golf course that I play,” he said. “But it's the days where you don't feel so good that you need to manage it and get around in a couple under par. That's the challenge for me right now.”

The struggle is not his alone. Rickie Fowler has gone more than two years without winning and has dropped to No. 70 in the world, with no guarantee he will get in the Dell Match Play in two weeks or the Masters next month.

Justin Thomas hasn't had a dream start to his year, starting with a barely audible anti-gay slur he muttered to himself at Kapalua that was heard by enough television viewers that it led to one sponsor dropping him and another giving him a public reprimand. And then with a chance in Phoenix, he learned his grandfather — his dad's father, a PGA professional — had died.

“I'm doing OK. I have definitely been better,” he said. “But at the same time, it's a good opportunity for me to try to grow and learn and get stronger because of it. I think it’s kind of put a lot of things into perspective, and unfortunately for my golf, it’s taken a toll on that a little bit, and I haven’t been and I’m not playing as well as I’d like.”

On the upswing are a pair of first-time major champions, Bryson DeChambeau and Collin Morikawa, who approach the game in vastly different manners. Morikawa, the consummate iron player, was flawless at times in winning his first World Golf Championship two weeks ago. DeChambeau had another must-see week at Bay Hill by trying to drive a par 5 and winning the Arnold Palmer Invitational.

They are reminders that the Stadium Course at TPC Sawgrass historically does not favor anyone. The winners include power players like McIlroy and Tiger Woods and Phil Mickelson, precision players like Webb Simpson, Fred Funk and Matt Kuchar, and even a few surprises like Craig Perks.

“I love the feeling I have around this golf course,” Simpson said. “I’m a thinker. I like plotting my way around and you’ve really got to do that here.”

The Players marks a milestone on the PGA Tour as it relates to the COVID-19 pandemic. This was the first of the cancellations that led to a dozen tournaments on the schedule that were not played.

It has been two years since McIlroy won. He has played 42 times around the world since then, yet he still feels like he has a title to defend this week.

“There's been no one else’s name added to the trophy after mine, so I guess I still am,” McIlroy said. “Yeah, it's hard when you're so far removed from that win. It was two years ago, and a lot has happened since. I’ll still try to rekindle those feelings and memories from two years ago, and hopefully that gives me the spark that I need to get my game in shape.”