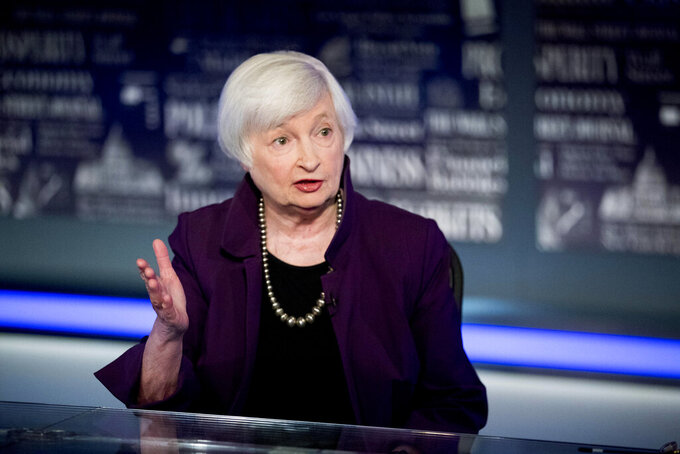 WASHINGTON (AP) — The U.S. government's budget deficit through February hit an all-time high of $l.05 trillion for the first five months of this budget year, as spending to deal with the coronavirus pandemic surged at a pace far above an increase in tax revenue.

The Treasury Department reported Wednesday that the October through February deficit was 68% larger than the $624.5 billion deficit recorded during the same period last year.

It easily surpassed the previous five-month deficit of $652 billion set in 2010 when the government was spending to try to lift the country out of the deep recession caused by the 2008 financial crisis.

The Congressional Budget Office has projected that the deficit for the budget year that ends on Sept. 30 will be $2.3 trillion. However, that estimate does not include the cost of President Joe Biden's $1.9 trillion COVID relief measure, which cleared Congress on Wednesday.

Nancy Vanden Houten, senior economist at Oxford Economics, said she estimated the latest relief measure will drive this year’s deficit up to $3.4 trillion.

The deficit for the month of February was $310.9 billion, up from $236.3 billion in February 2020, the month before the pandemic hit with force, shutting down businesses and triggering millions of job losses.

From October through February, government revenue is up 5.1% to $1.44 trillion while outlays are up 24.7% to $2.48 trillion. The deficit is the gap between revenues and outlays.

The deficit was pushed higher by trillions of dollars in support approved by Congress starting last March, including a $900 billion measure approved in December that extended emergency unemployment benefits that had expired.

Some of the big spending increases noted in the Treasury Department report include an additional $148 billion for the Labor Department, with most of that increase going to pay for unemployment benefits for the millions of workers who lost jobs when the pandemic hit. There was also an increase of $24 billion in support for the Agriculture Department, with much of that going to pay for increases to government food assistance programs.

Mayra MacGuineas, president of the Committee for a Responsible Federal Budget, said that if all the temporary provisions in the relief plan passed Wednesday get extended or made permanent it could end up adding $4 trillion to the national debt over the next decade, double the $1.9 trillion advertised price tag.

“For all its flaws, we are hopeful this package will help end the pandemic and will restore the economy to its prior strength. At that point, we'll need a plan to tackle our high and rising national debt,” MacGuineas said.