US Open in September as LPGA, Champions and Europe play on 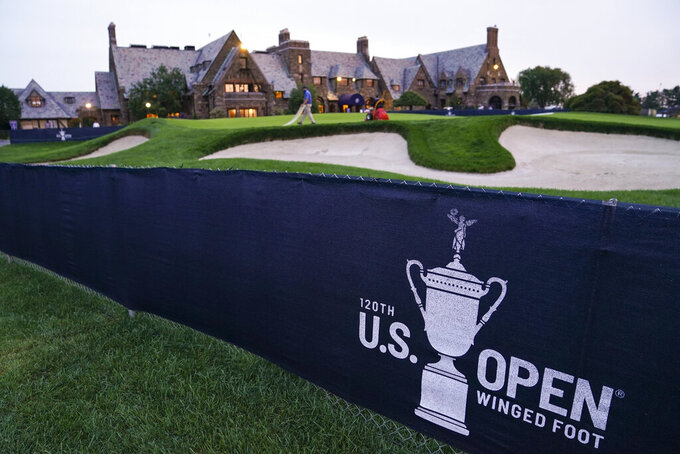 A green is prepared by the grounds crew outside the clubhouse ahead of practices before the U.S. Open Championship golf tournament, Monday, Sept. 14, 2020, at the Winged Foot Golf Club in Mamaroneck, N.Y. (AP Photo/John Minchillo)

Last year: Gary Woodland closed with a 2-under 69 for a three-shot victory at Pebble Beach over Brooks Koepka, who was trying to become the first player in more than a century to win the U.S. Open three straight times.

Notes: The U.S. Open returns to Winged Foot for the sixth time, and the first time in 14 years. Geoff Ogilvy won in a U.S. Open remembered as much for Phil Mickelson and Colin Montgomerie making double bogey on the 18th hole and finishing one shot behind. ... Brooks Koepka, who in the last three U.S. Opens has won twice and was runner-up, withdrew because of a knee injury. ... This is the first U.S. Open without qualifying in nearly 100 years. Local and sectional qualifying had to be canceled because it was not safe to stage them during the COVID-19 pandemic. ... This is the first U.S. Open in September since Francis Ouimet, a 20-year-old amateur, beat Harry Vardon and Ted Ray at The Country Club in 1913. ... Dustin Johnson has won twice and been runner-up twice in his last four starts. He captured the FedEx Cup for the first time. ... Lee Westwood is among Europeans playing in the U.S. for the first time since golf was shut down by the COVID-19 pandemic. He skipped the PGA Championship last month in San Francisco. ... Winged Foot is where Tiger Woods missed the cut in a major for the first time as a pro. ... Mickelson will get his sixth try at the career Grand Slam. He has a record six runner-up finishes in the U.S. Open, including at Winged Foot in 2006. ... Of the five previous U.S. Opens, only two players have finished under par — Fuzzy Zoeller and Greg Norman in 1984, when Zoeller won in a playoff.

Notes: Mirim Lee makes her first start since capturing her first major in a three-way playoff at the ANA Inspiration. Nelly Korda also is playing while the other playoff participant, Brooke Henderson, is not in the field. Henderson won the Portland Classic in 2015 and 2016. ... Sophia Popov makes her first start as an LPGA member. She won the Women's British Open but was not in the ANA Inspiration because the field was set in April when it was postponed by the COVID-19 pandemic. ... Lee's victory makes it 10 consecutive years that a South Korean has won at least one major. ... The Kia Classic, originally postponed from March until next week, has been canceled. ... The tournament dates to 1992 when Nancy Lopez won. ... Hannah Green backed up her Women's PGA title last year by tying the tournament record at 21-under 267. Henderson also shot 267 when she won in 2015.

Notes: One week after fans were allowed at the PGA Tour Champions event in South Dakota, the Pure Insurance Championship will be without spectators and juniors. The tournament typically pairs a Champions player with a player from The First Tee. Because of the COVID-19 pandemic and travel involving 78 kids, this year it is just 80 pros and their amateur partners. ... The tournament began in 2004 as The First Tee Open. ... Miguel Angel Jimenez won last week in South Dakota for his 10th career victory on the senior circuit and his second this year. ... Steve Stricker goes from playing the PGA Tour Champions to the U.S. Open at Winged Foot as the reigning U.S. Senior Open champion. ... Kirk Triplett and Jeff Sluman are three-time winners of the tournament. ... Hale Irwin and John Cook are the only players to win a PGA Tour event and a PGA Tour Champions event at Pebble Beach. ... Steve Stricker has finished in the top 3 in 14 of his 27 starts on the PGA Tour Champions. ... Bernhard Langer went over $1 million in earnings for the ninth straight year.

Notes: This is a joint European Tour and Challenge Tour event. ... George Coetzee, who moved up to No. 85 with his victory in the Portugal Masters, is the only player from the top 100 in the world ranking. ... The tournament was last part of the European Tour schedule in 2017, when Matt Wallace beat Julian Suri by three shots. Before that, it was held from 2007 to 2010, with Thomas Bjorn winning the last one. ... Sam Horsfield, who won twice in three weeks during the U.K. Swing, had to withdraw from the U.S. Open after a positive result from his coronavirus test when he arrived in New York. ... The Portugal Open was on the Challenge Tour schedule last year and won by Adrian Meronk. ... This completes three straight weeks on the Iberian Peninsula. ... The European Tour returns next week to the U.K. for a four-tournament stretch that starts with the Irish Open in Northern Ireland, then goes to Scotland and England, with two of those Rolex Series events.