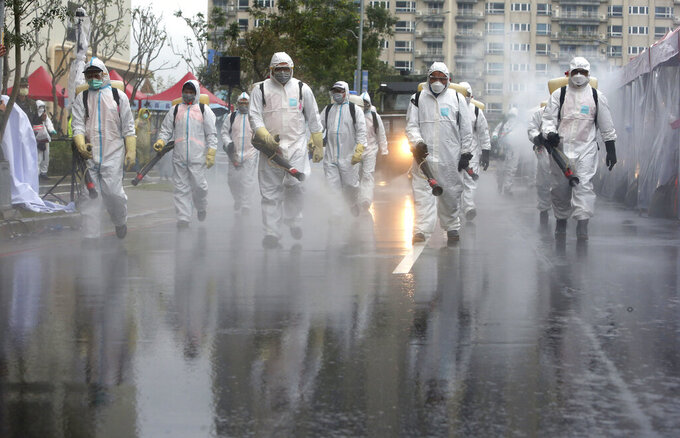 FILE - In this March 14, 2020, file photo Taiwanese army soldiers wearing protective suits spray disinfectant over a road during a drill to prevent community cluster infection of coronavirus in New Taipei City, Taiwan. The administration, backed by a bipartisan collection of lawmakers, is pressing for Taiwan's inclusion as a separate entity in international organizations like the World Health Organization and the International Civil Aviation Organization, both of which have significant roles in anti-virus efforts. (AP Photo/Chiang Ying-ying, File)

WASHINGTON (AP) — The Trump administration is seizing the opportunity of the coronavirus pandemic to push a cause that has long been an irritant in U.S. relations with China: Taiwan. The virus has added yet another dimension to U.S.-China tensions that were already wracked by a trade war and heated discussions over intellectual property, human rights and Chinese policies in Hong Kong and the South China Sea.

And, while U.S.-China differences over Taiwan have waxed and waned for decades, they have persisted and are reaching new heights as the world grapples with the exponential spread of the COVID-19 virus. As the pandemic has grown, U.S. officials and lawmakers have stepped up alternately bashing China for a lack of transparency over the outbreak and praising Taiwan for its response to the outbreak.

The administration is pressing for Taiwan's inclusion as a separate entity in international organizations like the World Health Organization and International Civil Aviation Organization, both of which have significant roles in anti-virus efforts. But, it is more broadly pushing back against Beijing's recent diplomatic victories over Taipei that have included several small countries abandoning diplomatic recognition of Taiwan in favor of China.

In the past 10 days, the administration has taken at least two specific overt steps to boost Taiwan, which China regards as a renegade province, in the international arena.

Aware of the moves, China's government has been pushing back. Taiwan has developed its own identity since separating from China during civil war in 1949, but has never declared formal independence. Beijing still claims sovereignty over the island of 23 million people and threatens to use force to seize control if necessary.

On Thursday, the State Department announced it had convened a virtual conference to promote “expanding Taiwan’s participation on the global stage.” Just days before, on March 26, the White House announced that President Donald Trump signed a law requiring the U.S. to press for Taiwanese recognition in international forums and to take unspecified action against countries that “undermine the security or prosperity of Taiwan.”

At the March 31 conference, the participants “discussed ongoing efforts to reinstate Taiwan’s observer status at the World Health Assembly, as well as other avenues for closer coordination between Taiwan and the World Health Organization,” the State Department said.

“Countries around the world can benefit from better understanding the ‘Taiwan Model’, as well as the generous contributions and impressive expertise Taiwan — a vibrant democracy and force for good — brings to the global community,” it said.

"Taiwan has a role to play in global health and should be a World Health Assembly observer,” the department said in a follow-up tweet on Friday.

The “Taiwan Model” refers to the early strict steps the island took to stem the spread of the virus, which as of late last week had reported only 329 confirmed cases and five deaths despite its close proximity to mainland China. In addition, Taiwan has announced plans to donate 7 million protective masks to European countries and another 2 million to the United States.

China has made clear its displeasure, noting “the frequent exchanges between the U.S. and Taiwan in the recent days” and ridiculing Washington's praise of Taipei.

“It seems that the U.S. standard is not that high since Taiwan has donated two million masks and then becomes a model of democracy and a true friend of the U.S.," Chinese foreign ministry spokeswoman Hua Chunying said Friday. “In the current extraordinary period, mutual assistance and support are all welcomed. But I still want to remind the U.S. and Taiwan that if someone tries to take advantage of the epidemic to impair China ’s core interests, they must be cautious.”

U.S. lawmakers who have consistently pushed for upgraded relations with Taiwan are fully behind the administration.

“A reevaluation of WHO leadership is urgently called for," said Sen Ted Cruz, R-Tex. “By consistently bending to the Chinese Communist Party, from downplaying the severity of the coronavirus to systematically excluding Taiwan, it has lost the credibility necessary to be effective.”

Republican Senator Marco Rubio of Florida shared similar sentiments. “Taiwan’s open spirit shines through and, once, again, the island punches above its weight. Taiwan deserves praise for its efforts to protect its citizens and assist other nations during the COVID-19 pandemic," he said.

Unsurprisingly, Taiwan, which has long been shut out of, or forced to identify itself as “Chinese Taipei,” at international organizations events, has applauded the U.S, push.

“We are grateful to U.S. continuous support to Taiwan’s participation in international organizations such as WHO,” Taiwan’s diplomatic mission in Geneva told the Associated Press. "It is to the benefit of the whole world if Taiwan is allowed to fully access and participate in all WHO meetings and mechanisms."

The Geneva-based WHO has been in a difficult position regarding Taiwan for some time and its staffers have faced uncomfortable questions about the matter that have gotten more pointed in recent weeks. Confronted with them, the organization released a statement last week saying that it was taking into account Taiwan's contributions to the virus fight.

“The question of Taiwanese membership in WHO is up to WHO Member States, not WHO staff," it said.

On March 26, the White House announced that Trump signed the “Taiwan Allies International Protection and Enhancement Initiative (TAIPEI) Act of 2019" that requires the U.S. to press for Taiwanese recognition in relevant international fora and to take unspecified action against countries that “undermine the security or prosperity of Taiwan.”

The law is partially aimed at countries that have in recent months switched their diplomatic recognition from Taipei to Beijing. Since Trump became president, at least four states have done so: Panama, Dominican Republic, El Salvador, the Solomon Islands and Kiribati.

But, with bipartisan backing, it also aims to elevate Taiwan's status in organizations other than the WHO, such as the Montreal-based International Civil Aviation Organization, which oversees international air service and from which Taipei is excluded as a member.

“Coronavirus further highlights the importance of including Taiwan in conversations regarding information-sharing and logistical planning, as air travel is a major factor in the spread of global pandemics,” the Democratic chairman and top Republican on the House Foreign Affairs Committee wrote in a February letter to the organization. “Excluding Taiwan from these important discussions recklessly jeopardizes the health and safety of the 23 million people on Taiwan and beyond.”