US volleyball star revels as role model for deaf kids 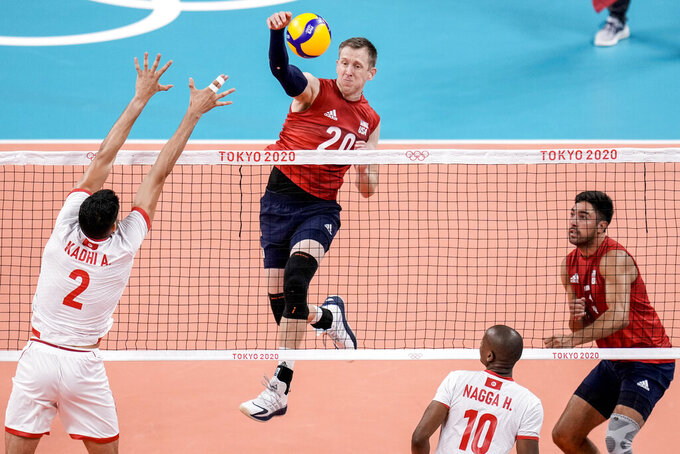 United States' David Smith spikes the ball during a men's volleyball preliminary round pool B match between United States and Tunisia at the 2020 Summer Olympics, Wednesday, July 28, 2021, in Tokyo, Japan. (AP Photo/Manu Fernandez)

TOKYO (AP) — Growing up nearly completely deaf provided a challenge for David Smith as he tried to integrate with other kids at school or on the playground.

Whatever Smith may have lacked in hearing was more than made up with empathy, compassion and most of all athletic ability.

Smith was born nearly deaf with 80-90% hearing loss but has managed to overcome that to become an elite athlete competing in his third Olympics for the U.S. men’s volleyball team.

“Sports were definitely a confidence booster for me,” Smith said. “It was something I thrived at despite having quote unquote a disadvantage. I think for me personally, that was great for my mental understanding of who I am and what I can do, but I think it was also a unique way of me integrating myself with the normal hearing world.”

While Smith may struggle to have normal conversations as he relies on hearing aids and lip reading to communicate, he never had any limitations when it came to sports.

The boy who wanted a ball of some kind as a gift at nearly every birthday and holiday was a star athlete at an early age before starting to focus on volleyball as he got to high school.

“As a kid, if you can show that you go out and you can play with other kids, do exactly what they can do, passing the ball and scoring goals or whatever else, they understand that maybe this kid is maybe limited one area of life, but that doesn’t mean that he can’t do everything else that we can do,” Smith said. “I think that was a huge way for me to become more socially involved. Sports was my way in."

Smith thanks his parents, Nancy and Rick, for that opportunity as they made the decision when he was young to put him in public schools and sports teams instead of keeping him with deaf kids.

Nancy Smith had worked with deaf kids for a few years before David was born so she was well prepared for how to raise him.

“I home-schooled him for a couple of years because I wasn’t sure what his language would be, how his reading and all that would be,” she said. “I wanted to make sure he had a good foundation. He just did so we put him into public school and there you go.”

Smith appreciates the choice his parents made and how they advocated for him along the way whether it was with coaches, teachers or referees, who sometimes questioned why he wore hearing aids.

“They didn’t hold me back,” Smith said. “That was one of the life lessons that I took from my parents. I’m the only one that can hold me back from doing what I want to do. If I want to do something there is a way to do it whether it’s sports or a job or university or a relationship. I might have to take a different route. I might have to make some adjustments along the way. But if I truly have a passion for it, I truly have a calling to do it, it’s on my shoulders to be able to find a way to make it happen.”

The 36-year-old Smith eventually earned a scholarship to play volleyball at UC Irvine, joined the national team in 2009 and made his first of three Olympic teams in 2012. He won a bronze medal in 2016 and is seeking to do even better this year.

He has also played professionally across Europe and has been an inspiration to deaf kids wherever he goes.

In college road games, there were deaf cheering sections for him in Hawaii and kids would give Nancy and Rick Smith leis.

Now he hears from parents and kids on social media or wherever he plays. Smith said he was particularly touched by one young deaf fan when he played in Poland, who came to all his matches and wore Smith's jersey.

Smith said the kid was weeping when he changed teams, but he still keeps in touch with the mother through social media.

“I think sometimes so many people see hearing loss as a disability and that’s all they see and that becomes the center of their thought process," he said. “So you’re thinking about what you can’t do instead of what you can do. Being able to demonstrate that is one of the most rewarding things. Being able to be a real time influence in a real time inspiration to the next generation has been real cool.”

Smith is a starter on a U.S. team that improved to 2-1 at the Olympics by beating Tunisia in four sets on Wednesday.